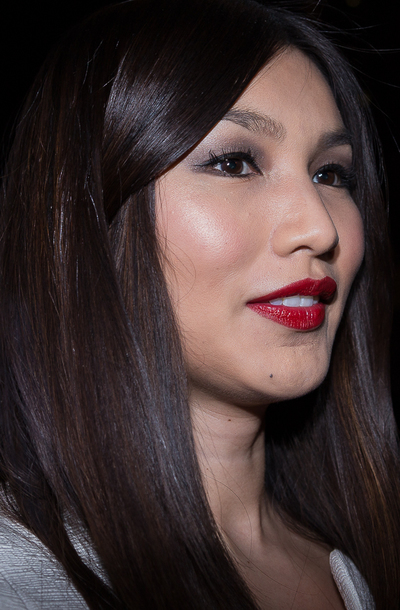 Gemma Chan (born 29 November 1982) is a British Chinese film, television, and theatre actress and former fashion model. She portrays Charlotte in season four of the Showtime and ITV2 series Secret Diary of a Call Girl; Ruth in Channel 4's Fresh Meat; Mia Bennett in the BBC's Doctor Who "The Waters of Mars" and Soo Lin in Sherlock. She also appeared in Exam and Paramount Pictures' action-thriller Jack Ryan: Shadow Recruit. She stars in Humans, an AMC/Channel 4 science-fiction drama, which premiered in June 2015. Series Two aired in 2016 and Series Three in 2018. She will portray Minn-Erva in the 2019 Marvel Studios film Captain Marvel.

Chan was born at Guy's Hospital in London, England. Her father grew up in Hong Kong and was an engineer. Her Chinese-Scottish mother, a pharmacist at Guy's Hospital, emigrated from pre-Cultural Revolution Communist China via Hong Kong with her parents (Chan's maternal grandparents) and younger sister, growing up in Greenock, Scotland. Chan was raised near Sevenoaks, a town in west Kent, in South East England and attended Newstead Wood School for Girls in Orpington in the London borough of Bromley. She later went on to read law at Worcester College, Oxford.

Following graduation, Chan gained a training contract offer as a graduate at the law firm Slaughter and May, but instead pursued an acting career and studied at the Drama Centre London. Spotted at her showcase by British film producer Damian Jones, she signed to acting agent Nicki van Gelder.

Chan appeared in the autumn 2009 special of the BBC's Doctor Who ("The Waters of Mars") with David Tennant and Lindsay Duncan, which aired 15 November 2009 in the UK, playing geologist Mia Bennett. She was cast as a series regular in Secret Diary of a Call Girl, the fourth and final series airing on ITV2 in the UK and Showtime in the US in 2011. She has also appeared in Fresh Meat, BBC One's Sherlock, and the fourth series of The IT Crowd for Channel 4.

In 2012, Chan was a regular in series two of Sky Living's supernatural drama Bedlam and in True Love, a five-part semi-improvised television series produced by Working Title for BBC One,

In 2013, she starred in BBC One crime drama Shetland alongside Douglas Henshall and Steven Robertson and guest starred in the BBC's Death in Paradise. She was a cast member of Channel 4 romantic drama Dates.

Chan played the synthetic Anita/Mia in Humans, an AMC/Channel 4 eight-part science-fiction drama. Filming commenced in autumn 2014 with a June 2015 premiere. The second series premiered on 30 October. For her portrayal of Anita/Mia, Chan has been nominated for numerous awards.

In July 2016, Chan provided the voice for the character of Dewdrop in BBC One's animated television series Watership Down.

In 2010, she appeared in the World War II drama film Shanghai, the psychological thriller Exam, and the 2011 comedy-drama Submarine. A supporter of human rights, she has made a film for Amnesty International to celebrate the 60th anniversary of the Universal Declaration of Human Rights. She appeared in the action-thriller Jack Ryan: Shadow Recruit. The Double, and London Fields. Chan starred in Belles familles, by French director and screenwriter Jean-Paul Rappeneau, which premiered in 2015. She is scheduled to appear in film Crazy Rich Asians, alongside Constance Wu and Michelle Yeoh.

Chan made her professional stage debut in the British Premiere of Bertolt Brecht's last play Turandot at the Hampstead Theatre, London, directed by Anthony Clark. In November 2012, she performed in The Sugar-Coated Bullets of the Bourgeoisie, a play by Anders Lustgarten at the Finborough Theatre. In June 2013, she performed in the UK premiere of Yellow Face by American playwright David Henry Hwang at The Park Theatre, London, directed by Alex Sims. It was revived in 2014 at the Royal National Theatre with the original London cast returning.

In November 2013, Chan performed in the world premiere of Our Ajax by Timberlake Wertenbaker at the Southwark Playhouse, London. Wertenbaker chose her to play the war goddess Athena after she saw her performance in Yellow Face.

On 6 August 2013, Chan appeared as a guest on the "Cultural Exchange" feature of the BBC Radio 4 series Front Row, where she nominated the film The Princess Bride as an art work she loves.

In September 2013, Chan appeared at the Old Bailey in central London as a witness to a fatal stabbing outside Putney Bridge tube station.