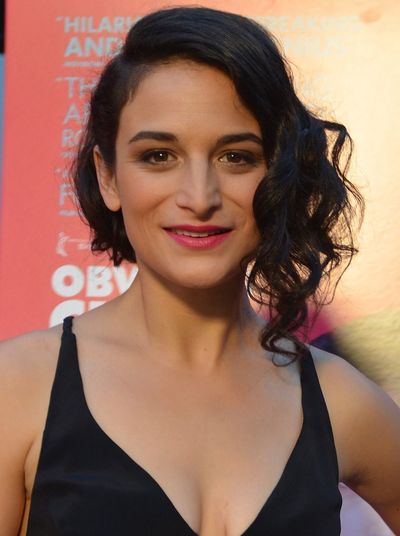 Jenny Sarah Slate (born March 25, 1982) is an American actress, voice actress, comedian and author best known for her role as Donna Stern in Obvious Child, as well as being the co-creator of the Marcel the Shell with Shoes On short films and children's book series. She is also known for her season as a cast member on Saturday Night Live from 2009 to 2010 and for her appearances in shows such as House of Lies, Married, Parks and Recreation, Bob's Burgers, Hello Ladies, Kroll Show, and Girls.

Slate was born Jenny Sarah Slate on March 25, 1982, in Milton, Massachusetts, to Ron Slate (born 1950), a Massachusetts-based poet and author, and Nancy (née Gilson), a ceramicist. She is the middle child of three, with two sisters named Abigail and Stacey. She was raised in a Jewish family. One of her grandmothers, whose family was from Russia and Turkey, was born in Cuba and raised in France.

After graduating from Milton Academy as the valedictorian, she attended Columbia University as a literature major, where she helped form the improv group Fruit Paunch, starred in the Varsity Show and met Gabe Liedman, who would become her comedy partner. Slate graduated from Columbia University in 2004.

Alongside Gabe Liedman, Slate was half of the comedy duo Gabe & Jenny. Their live stand-up shows with Max Silvestri titled Big Terrific were named best new variety show of 2008 by Time Out New York.

Slate first met Liedman in 2000 while attending Columbia University. They describe their relationship as a "nonsexual romance" and Slate says, "I like to think of us as kind of like Elaine Benes and George Costanza, but we like each other." Throughout 2008 and 2009, Slate regularly performed her one-woman show titled Jenny Slate: Dead Millionaire at the Upright Citizens Brigade Theater (UCBT) in New York City.

Slate was best known as a regular commentator on many VH1 "talking head" commentary programs. In early 2009, she had made several appearances on the Late Night with Jimmy Fallon recurring sketch "7th Floor West", where she acted out the role of an NBC page, also named Jenny, who was later promoted to Fallon's assistant. She also had a recurring role in Bored to Death and starred in Obvious Child. Slate has made guest appearances on television programs, such as Bob's Burgers, Girls, The Whitest Kids U' Know, Important Things with Demetri Martin and Raising Hope.

Slate joined the cast of Saturday Night Live for one season from 2009 to 2010. In her first episode, she accidentally said "fucking" during her debut sketch "Biker Chick Chat", which was heard on the live broadcast, but removed from reruns. During her brief time on the series, she impersonated celebrities (such as Hoda Kotb, Lady Gaga and Kristen Stewart) and became known for Tina-Tina Chaneuse, an infomercial pitchwoman who advertises personalized doorbells, car horns, and alarm clocks. Slate's contract was not renewed for another season and thus, she left the series.

In August 2010, she co-wrote and voiced Marcel the Shell With Shoes On, which garnered viral success. This led to Marcel the Shell with Shoes on, Two. Slate also wrote a "Marcel"-themed children's book that was released on November 1, 2011. Her first major film role was as Zoe in Alvin and the Chipmunks: Chipwrecked; more films followed in 2012, including the voice of Ted's mother in The Lorax.

Slate appears as Liz B. in the recurring "PubLIZity" sketches in Kroll Show, as well as many other recurring and one-off characters, performing in some capacity in almost every episode, much like Jon Daly.

In September 2012, it was announced that Slate had been hired to write the script for a reboot of the Looney Tunes franchise for Warner Bros. The film was described as being a "live action / CGI hybrid". Her first appearance in Parks and Recreation was in the 2013 episode "Bailout", in which she portrayed Mona-Lisa Saperstein. Following her success on the NBC show, Slate released and starred in a 12 episode mini-series on YouTube called Catherine, celebrating late 1980' and early 1990s soap opera aesthetics. On July 23, 2013, she appeared in Drunk History retelling the history of Coca-Cola.

Slate co-starred with Judy Greer and Nat Faxon in the first season of the FX series Married. She left the series as a series regular in season two, but still appeared in a few episodes. Sarah Burns took her place in the series.

In September 2012, Slate married filmmaker Dean Fleischer-Camp, with whom she collaborated on the Marcel the Shell With Shoes On books and short films. The pair announced their separation in May 2016.

She lived in Cobble Hill, Brooklyn, before moving with her former husband to Los Angeles in the early 2010s.

Slate is a feminist.