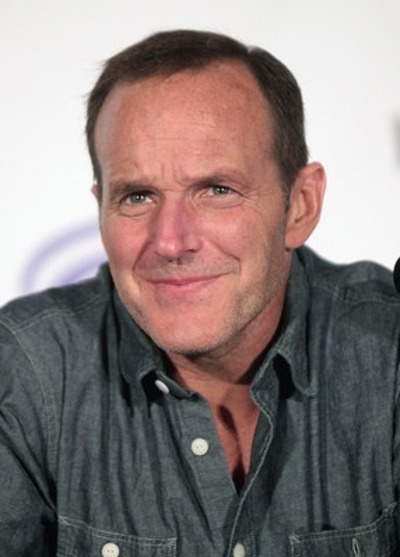 Robert Clark Gregg (born April 2, 1962) is an American actor, director, screenwriter, and voice actor. He is best known for the role of Agent Phil Coulson in the Marvel Cinematic Universe. He has appeared in Iron Man (2008), Iron Man 2 (2010), Thor (2011), The Avengers (2012), and the television series Agents of S.H.I.E.L.D., making him the actor with the longest screen time in the MCU. He appeared as the character in Captain Marvel (2019). He also voices the character on the animated television series Ultimate Spider-Man and in the video games Lego Marvel Super Heroes, Lego Marvel Avengers, and Marvel Heroes.

Gregg has also co-starred as Christine Campbell's ex-husband Richard in the CBS sitcom The New Adventures of Old Christine, which debuted in March 2006 and concluded in May 2010. He also played FBI Special Agent Mike Casper on the NBC series The West Wing and Cam, the on-and-off boyfriend of Jack (and client of Grace), on the NBC series Will & Grace.

Gregg was born April 2, 1962 in Boston, Massachusetts, the son of Mary Layne (née Shine) and Robert Clark Gregg Sr., an Episcopal priest and Stanford University professor. Because his family relocated frequently, he had lived in seven cities by the time he was 17. He attended high school in Chapel Hill, North Carolina, where his father was a professor at nearby Duke University. He attended Ohio Wesleyan University for two years before dropping out and moving to Manhattan. He worked various jobs, such as being a bar back, a security guard at the Guggenheim Museum, and a parking valet at a restaurant. He later enrolled at New York University's Tisch School of the Arts, where he studied drama and English, and graduated in 1986.

Gregg was a founding member, and later artistic director, of the off-Broadway Atlantic Theater Company, which formed in 1983. Gregg has been featured in a number of supporting roles in films, such as Lovely & Amazing, The Human Stain, and In Good Company, and a number of guest spots on TV series, such as Will & Grace, Sports Night, Sex and the City and The West Wing. He also wrote the screenplay for the 2000 thriller What Lies Beneath.

He is the director and screenwriter of the 2008 film Choke, based on the Chuck Palahniuk novel of the same name, starring Sam Rockwell. Gregg consulted his father, a retired religion professor at Stanford, for the quotation from Saint Paul's letter to the Galatians which Gregg used in Choke. Gregg's father is also the former chaplain at Stanford Memorial Church.

In 2008, Gregg appeared in the film Iron Man as S.H.I.E.L.D. agent Phil Coulson. In 2010, Gregg reprised his role as Agent Coulson for Iron Man 2. Gregg had since signed up for a multiple film deal as the character with Marvel Studios. In 2011, he returned again as Coulson for Thor. Gregg noted his being a part of the expanding Marvel Cinematic Universe as being very exciting, "Agent Coulson was one of the guys who wasn't really in the comic books, and he was a very kind of small role in Iron Man," he said, "and I was just very lucky that they chose to expand that character and chose to put him more into the universe of it. It's really a blast!" Following on from his appearance in Thor, he again reprised his role in The Avengers. Gregg also stars in a series of Marvel short films that center around his character and can be seen on the Blu-ray releases of the films.

In October 2010, Gregg was part of the cast of a staged reading of Larry Kramer's The Normal Heart alongside Dylan Walsh, Lisa Kudrow, and Tate Donovan, presented in Los Angeles on the occasion of the play's 25th anniversary (and preceding the play's 2011 Broadway premiere, which retained elements of this staged reading); the reading was directed by his father-in-law, Joel Grey.

Since 2013, Gregg has portrayed Agent, later Director Coulson in the ABC television series Agents of S.H.I.E.L.D., set within the MCU, alongside Ming-Na Wen and Chloe Bennet. He has gone on to direct episodes in seasons five and six.

On April 20, 2013, Trust Me, a film written and directed by Gregg, premiered at the Tribeca Film Festival. The film found limited release in the United States in June 2014.

Gregg has been married since July 21, 2001, to actress Jennifer Grey; the couple co-starred in the Lifetime TV movie Road to Christmas. They have a daughter Stella, born December 3, 2001. He is a sober alcoholic, and describes himself as a member of a Jewish family (his wife is Jewish). He has a black belt in Brazilian jiu-jitsu. Gregg and his wife were two of the demonstrators at the 2017 Women's March held on January 21, 2017 in Washington, D.C..