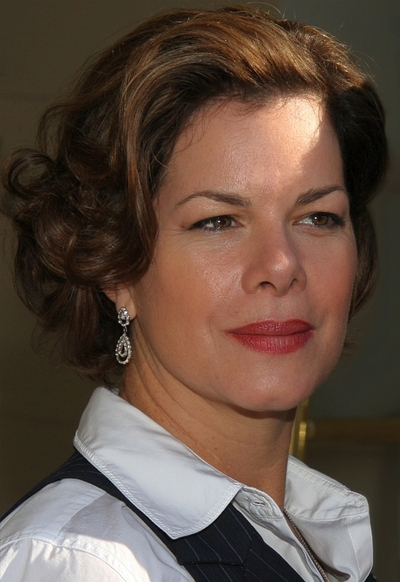 Harden's breakthrough role was in Miller's Crossing (1990) and then The First Wives Club (1996) which was followed by several roles which gained her wider fame including the comedy Flubber (1997) and Meet Joe Black (1998). She received an Academy Award for Best Supporting Actress for her role as Lee Krasner in Pollock (2000). She has starred in a string of successful mainstream and independent movies, such as Space Cowboys (2000), Into the Wild (2007), andThe Mist (2007), for which she won the Saturn Award for Best Supporting Actress.

Harden's recent credits include Lasse Hallström's film The Hoax, opposite Richard Gere, and Hollywood Pictures' The Invisible, directed by David S Goyer. She was also recently seen in Lakeshore Entertainment's The Dead Girl, directed by Karen Moncrieff and starring Toni Colette, Kerry Washington, Mary Steenburgen, and Brittany Murphy. In 2009, Harden received a Tony Award for the Broadway play God of Carnage. She has also twice been nominated for an Emmy Award.

Harden, one of five children, was born in La Jolla, California, the daughter of Texas natives Beverly (née Bushfield), a housewife, and Thad Harold Harden, who was an officer in the United States Navy. One of Harden's brothers is named Thaddeus, as is her former husband. Harden's family frequently moved because of her father's job, living in Japan, Germany, Greece, California, and Maryland. She graduated from Surrattsville High School in Clinton, Maryland in 1976, the University of Texas at Austin with a BA in theatre, and the Graduate Acting Program at New York University's Tisch School of the Arts with a Master of Fine Arts.

Harden's first film role was in a 1979 student-produced movie at the University of Texas. Throughout the 1980s, she appeared in several television programs, including Simon & Simon, Kojak, and CBS Summer Playhouse. She appeared in the Coen brothers' Miller's Crossing (1990), a 1930s mobster drama in which she first gained wide exposure. Even so, at the time, living in New York City, she had to go back to doing catering jobs "because I didn't have any money".

In 1992, she played actress Ava Gardner alongside Philip Casnoff as Frank Sinatra in the made for TV miniseries Sinatra. Throughout the 1990s, she continued to appear in films and television. Notable film roles include The Imagemaker (1986), her first screen role, in which she played a stage manager; the Disney sci-fi comedy Flubber (1997), a popular hit in which she co-starred with Robin Williams; the supernatural drama Meet Joe Black (1998); Labor of Love (1998), a Lifetime Television movie in which she starred with David Marshall Grant; and Space Cowboys (2000), an all-star adventure-drama about aging astronauts.

In 1993, Harden debuted on Broadway in the role of Harper Pitt (and others) in Tony Kushner's Angels in America. The role earned her critical acclaim and she received a Tony Award nomination (Best Featured Actress in a Play). The winner in that category was Debra Monk in Redwood Curtain.

Harden was awarded the 2000 Academy Award for Best Supporting Actress for her portrayal of painter Lee Krasner in Pollock (2000). In 2003, she was again nominated in the same category for Mystic River.

Harden married Thaddaeus Scheel, a prop master whom she worked with on The Spitfire Grill (1996), in 1996. Harden and Scheel have three children: a daughter, Eulala Grace Scheel (September 1998), and twins Julitta Dee Scheel and Hudson Scheel Harden (April 22, 2004). In February 2012, Harden filed for divorce from Scheel.

On December 14, 2003, her nephew Sander Waring Harden and niece Audrey Gay Harden died along with their mother Rebecca Harden, as a result of a fire in their Queens, New York, apartment. Rebecca Harden was, at the time, divorced from Marcia Gay's brother, the children's father, Thaddeus Harden.

On May 22, 2010, Harden delivered the 127th Spring Commencement Address at her alma mater, the University of Texas at Austin.

Harden and her children reside in Santa Monica, California.