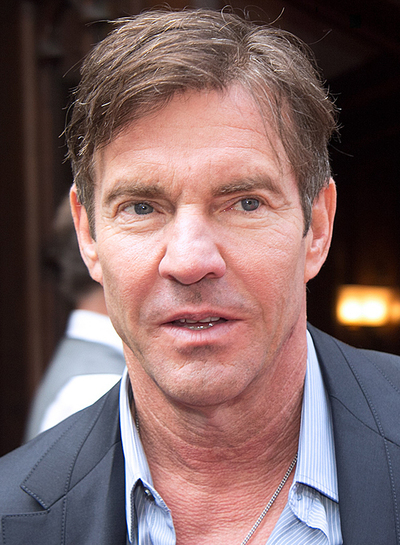 Dennis William Quaid (born April 9, 1954) is an American actor known for his comedic and dramatic roles. First gaining widespread attention in the 1980s, his career rebounded in the 1990s after he overcame an addiction to drugs and an eating disorder. Some of his notable credits include Breaking Away, The Long Riders, The Right Stuff, Enemy Mine, Great Balls of Fire!, The Big Easy, Far from Heaven, The Rookie,The Day After Tomorrow, Traffic, Vantage Point, Footloose, Frequency, Wyatt Earp, The Parent Trap, Soul Surfer, Playing for Keeps and Innerspace.

Quaid was born in Houston, Texas, the son of Juanita Bonniedale "Nita" (née Jordan), a real estate agent, and William Rudy Quaid (November 21, 1923 – February 8, 1987), an electrician and a third cousin of performer Gene Autry. He is the younger brother of actor Randy Quaid. The Quaid brothers grew up in Bellaire, Texas, which is a small city surrounded by Houston, and in southwest Houston. Quaid has English, Irish, and Cajun (French) ancestry. He attended Paul W. Horn Elementary School in Bellaire, and Pershing Middle School in Houston. He studied Mandarin and dance at Bellaire High School in Bellaire, Texas, and later in college, at the University of Houston, under drama coach Cecil Pickett, who had previously taught at Bellaire High and whose daughter is actress Cindy Pickett. It was during his time at Bellaire High School that he developed the nickname 'Dennis Quand', (a combination of 'Quaid' and 'Bond') in relation to his obsession with the 007 film character and was regularly referred to by this name.

After his brother, Randy Quaid, was nominated for an Academy Award for Best Supporting Actor for his role in The Last Detail (1973), Quaid dropped out of the University of Houston before graduating and moved to Los Angeles to pursue an acting career of his own. He initially had trouble finding work but began to gain notice when he appeared in Breaking Away (1979) and earned good reviews for his role inThe Right Stuff (1983).

Known for his grin, Quaid has appeared in both comedic and dramatic roles. Quaid had starring roles in the films Enemy Mine (1985) and Innerspace (1987). He also achieved acclaim for his portrayal of Jerry Lee Lewis in Great Balls of Fire! (1989). In 1989, he also appeared throughout the Bonnie Raitt music video for the song "Thing Called Love."

Quaid has been married three times and has three children.

Quaid dated Shanna Moakler in 2001. They were together when she was approached by Playboy, and they discussed it before she posed nude in the magazine. The relationship lasted for eight months.

Quaid married his third wife, Texas real-estate agent Kimberly Buffington, on July 4, 2004 at his ranch in Paradise Valley, Montana. Together they have fraternal twins, Thomas Boone and Zoe Grace, born via gestational carrier on November 8, 2007 in Santa Monica, California.

Buffington filed for divorce from Quaid in March 2012. According to the divorce petition, the marriage had "become insupportable because of discord or conflict of personalities." Buffington's attorney then withdrew the divorce papers on April 26, 2012. In the summer of 2012, Quaid and Buffington moved to California. In October 2012, Quaid and Buffington again decided to separate, and Buffington filed for legal separation, seeking joint legal and sole physical custody of the twins. After waiting to establish the required six months of residency in California, Quaid filed for divorce on November 30, 2012, asking for joint legal and physical custody of the children and offering to pay spousal support to Buffington.

Dennis Quaid is a main cast in Strange World.