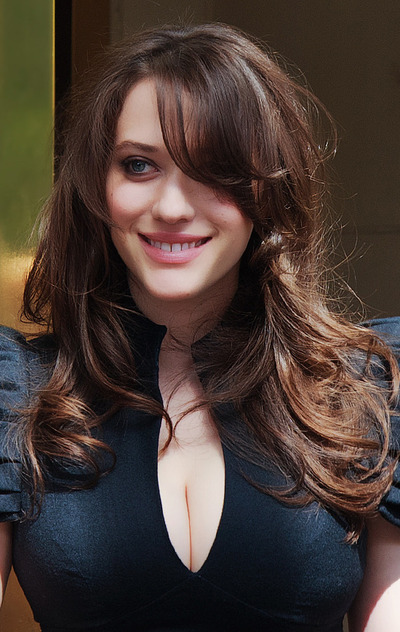 Kat Dennings (born Katherine Litwack; June 13, 1986) is an American actress. Emerging with a role in an episode of the HBO dramedy series Sex and the City, Dennings has since appeared in the films The 40-Year-Old Virgin, Big Momma's House 2, Charlie Bartlett, Raise Your Voice, The House Bunny, Defendor, Nick and Norah's Infinite Playlist, and Thor. She also co-stars in the CBS television series 2 Broke Girls.

Dennings was born and raised in the Bryn Mawr area, near Philadelphia, Pennsylvania. Her mother, Ellen Judith Litwack, is a poet and speech therapist, and her father, Gerald J. Litwack, is a molecular pharmacologist and college professor and chairman. Dennings is the youngest of five children, including an older brother, Geoffrey S. Litwack. Her family is Jewish.

Dennings was homeschooled; her only enrollment at a traditional school was for a half-day at Friends' Central School. She graduated from high school early, at the age of 14. She moved with her family to Los Angeles, California, around 2002 so that she could act full-time. She adopted the name Dennings as her professional name when she was younger. According to Dennings, as stated in Interview magazine in 2007, her parents initially considered her idea of pursuing an acting career to be "the worst idea ever".

Dennings began her career in commercials at the age of 10. Her first acting job was an ad for potato chips. Dennings made her professional debut with an appearance on HBO's Sex and the City in 2000, in the episode "Hot Child in the City", playing an obnoxious 13-year-old who hires Samantha to handle publicity for her bat mitzvah. She then starred on the short-lived series Raising Dad from 2001–2002, as Sarah, a 15-year-old raised by her widowed father (Bob Saget), with a pre-teen sister (Brie Larson). In 2002, Dennings appeared in The Scream Team, a Disney Channel movie, as a teenager who stumbles into a group of ghosts. She was cast for a five episode run on The WB's Everwood, but the role was recast with Nora Zehetner.

In an interview with The Times in January 2009, Dennings stated, "I don't have a boyfriend. I have friends, girl friends, great friends. We just hang out in other's places and have one-on-one bonding time". Later, in an interview with Daydream Nation co-star Josh Lucas and interviewer David Poland, Dennings admitted to having a boyfriend. As of November 2011, she lives in an apartment in Los Angeles's San Fernando Valley.