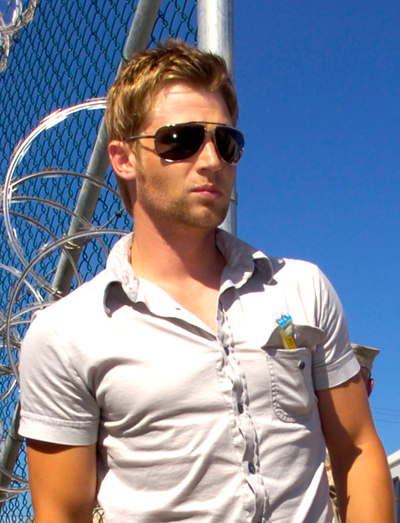 Michael James "Mike" Vogel (born July 17, 1979) is an American actor and former fashion model. Vogel began acting in 2001, and has since appeared in several films and series, including The Texas Chainsaw Massacre, The Sisterhood of the Traveling Pants, Grind, Poseidon, Blue Valentine, The Help and Cloverfield.

Vogel was born in Abington Township, Montgomery County, Pennsylvania and raised in Warminster Township, Pennsylvania; both of his grandfathers fought in World War II, with one being a tank commander and fighting in the Battle of the Bulge, and the other being a Seabee in the Navy. Vogel has two younger siblings: a brother, Daniel Aaron, and a sister, Kristin. Vogel attended William Tennent High School, the same high school as Sprint spokesman Brian Baker and boxer Kermit Cintron, where Vogel was on the Freshman wrestling team. During the early 2000s, he frequently traveled to New York City in order to audition for acting roles and modeling slots.

Vogel began modeling for Levi's, and was subsequently cast in the television series Grounded for Life, appearing in a recurring role between 2001 and 2004. His first film role was in the skateboarding-themed Grind, which was released on August 15, 2003. The film's co-stars included Adam Brody and Jennifer Morrison. Vogel's next role was in the made-for-television remake of Wuthering Heights, which premiered on MTV a month after Grind's release, in September 2003. In the film, Vogel played Heath opposite Erika Christensen's Kate. Vogel's last 2003 role was in the remake of The Texas Chainsaw Massacre, which was released in October to high box office ratings.