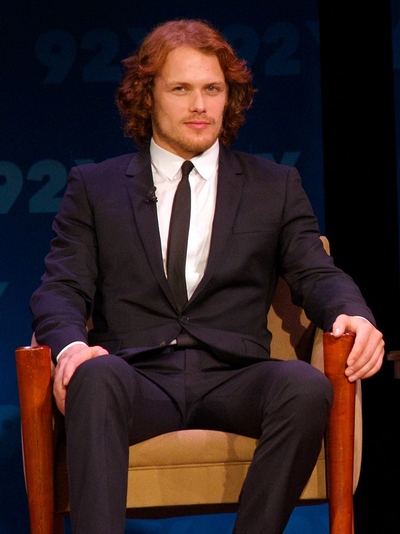 Sam Roland Heughan (born 30 April 1980) is a Scottish actor, known for his role as Jamie Fraser in the Starz series Outlander, for which he received two nominations for the Saturn Awards. He was nominated for a Laurence Olivier Award for Most Promising Performer in 2003, for his performance in the play Outlying Islands, performed at the Royal Court Theatre Upstairs.

Heughan was born in Balmaclellan, Dumfries and Galloway, Scotland, on 30 April 1980. At the age of five, he moved to nearby New Galloway where he attended Kells Primary School. During this time, he lived in converted stables in the grounds of Kenmure Castle. Moving to Edinburgh aged 12, he attended James Gillespie's High School for a year and then moved to the Edinburgh Rudolph Steiner School till the end of the sixth year. He subsequently spent two years working and travelling, before enrolling at the Royal Scottish Academy of Music and Drama (now the Royal Conservatoire of Scotland) in Glasgow, graduating in 2003.

While he was still a student, Heughan appeared in Outlying Islands, a play by Scottish playwright David Grieg. The play premiered in Edinburgh, Scotland, at the Traverse Theatre. It then moved to the Royal Court Theatre Upstairs, in London. Heughan was eventually nominated for a Laurence Oliver Award for Most Promising Performer for his performance.

In 2004 he appeared in the miniseries Island at War, a WWII drama about the German occupation of the Channel Islands. The following year, he appeared in several episodes of the Scottish soap opera River City. Over the next few years, Heughan appeared in a number of made for TV movies, including A Very British Sex Scandal (2007) and Breaking the Mould (2009). He also made appearances in a number of television series, including Midsomer Murders, Rebus, and Party Animals.

In 2009, Heughan landed a recurring role as Scott Nielson, the boyfriend of Nurse Cherry Malone and secret drug dealer in the BBC soap opera Doctors.

The following year, Heughan starred as the title character in the direct to video Young Alexander The Great, which filmed in Egypt.

In 2010, Heughan played Hugh Tennent, founder of Tennent's Lager, in a series of comical commercials, which won a number of awards at the Scottish Advertising Awards.

In 2011, he played Prince Ashton in the Hallmark Channel film A Princess for Christmas. That same year, he starred in BBC drama First Light based on Geoffrey Welland's WWII memoir of the same name.

In 2012, he starred as Batman in the touring stage show Batman Live. During this time he made the news for his assistance in a real-life citizen's arrest.

In 2013, Heughan was cast as Jamie Fraser on the Starz period drama series Outlander. He was the first cast member officially announced, to great praise by the author of the series, Diana Gabaldon, who said, "That man is a Scot to the bone and Jamie Fraser to the heart. Having seen Sam Heughan not just act, but be Jamie, I feel immensely grateful to the production team for their painstaking attention to the soul of the story and characters."

In 2014, Heughan appeared in several independent films such as the mystery-thriller Emulsion and the comedy Heart of Lightness, in which Heughan appeared with two of his future Outlander co-stars; Laura Donnelly, who plays Jamie's sister, Jenny Murray, and Rosie Day, who played Mary Hawkins in the second season.

Outlander premiered in 2014, and was an immediate hit, with strong ratings and a positive critical response. It was renewed for a second season, which aired in April 2016, and on 1 June 2016 it was announced that Starz would renew it for a third and fourth season. The third season premiered to strong ratings in September 2017, and in May 2018 the network once again renewed the series for a fifth and sixth season.

In 2018, The Spy Who Dumped Me, a comedy that Heughan filmed during an Outlander hiatus, was released. It was also announced that he would play a role in Bloodshot, an adaptation of the best selling comic book in the Valiant universe.