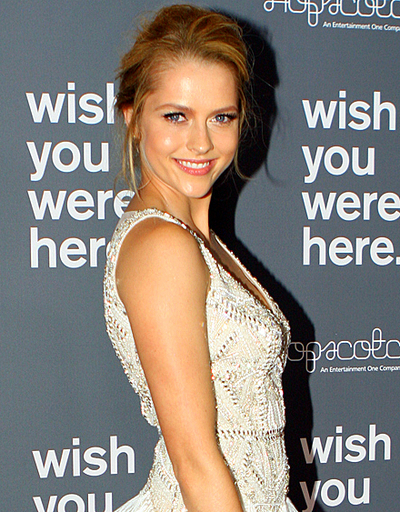 Teresa Mary Palmer (born February 26, 1986) is an Australian actress and model who made her film debut in the suicide drama 2:37. Palmer was seen in The Grudge 2 in 2006, in December Boys and in the 2008 children's fantasy Bedtime Stories. She appeared in The Sorcerer's Apprentice in 2010 and her films in 2011 include her role as Number Six in the sci-fi film I Am Number Four and playing the love interest in Take Me Home Tonight. In 2013, she starred in the zombie love story, Warm Bodies and the romantic war film, Love and Honor. In 2014, she co-starred in the direct-to-video romantic drama film Parts Per Billion, the thriller film Cut Bank and had the leading role in the independent drama film The Ever After, which she co-wrote and co-produced with her husband, director Mark Webber. She co-starred in the 2014 black comedy thriller film Kill Me Three Times and in the 2015 remake of Point Break.

In 2016, Palmer played the female lead role in the film adaptation of the Nicholas Sparks novel The Choice.

Palmer was born and raised in Adelaide, South Australia. She is the only child of Kevin Palmer, an investor, and Paula Sanders, a former nurse and missionary. Her parents divorced in 1989 when she was three. She has a stepmother, Karen Palmer, as well as two half-sisters and two stepbrothers, who lived with her father. Palmer stated to Interview that she "came from rather humble beginnings"; she lived in public housing with her mother, and grew up on her father's farm in the Adelaide Hills. Palmer was named after Mother Teresa by her mother, and has stated that she had a "tough upbringing" due to her mother's manic depression.

Palmer was a student at Mercedes College, a private Catholic day school, and won a local casting audition, "Search for a Movie Star", in 2003. Her first acting job was dressing up as Strawberry Shortcake and Santa's Little Helper on weekends for promotions in shopping centres near Adelaide. Palmer went to acting classes for a couple of years and appeared in a few television commercials. She was a fast food attendant at Hungry Jack's in Rundle Mall in 2005, before working at clothing retailers Supré, Mambo Australia, and Cotton On.

After graduating from high school, Palmer got a call from her local talent agent about appearing in a student film, 2:37. The director had seen her head shot on the acting agency's website and wanted her to be in the movie. Palmer thought that she would work in an animal rescue service, and eventually open her own animal welfare agency. She was accepted into university to study teaching and was taking a course on journalism, but had always dreamt of acting. Palmer quit university to work on the film.

Palmer had been an extra on Deck Dogz (2005), and other films shot in Adelaide. At the age of 18, she was cast by filmmaker Murali K. Thalluri in the independent Australian film 2:37. Palmer portrayed Melody in the film, a popular high school student who becomes suicidal after being impregnated by her brother. She was nominated for the 2006 Australian Film Institute Award for Best/ ok Lead Actress for her performance. She then signed with a talent agent in Sydney. A role in Wolf Creek (2005) followed, in a pool party scene.

Palmer starred in the psychological thriller Restraint, with English actor Stephen Moyer and Calvin Klein model Travis Fimmel. Shot on location around New South Wales in mid-2005, the film was written by Dave Warner and directed by David Denneen. Palmer was named an Australian "star of tomorrow" by Screen International that year. She then starred in December Boys, a coming-of-age film set in the 1960s, based on a novel by Michael Noonan. She played Lucy, who has a romance with Daniel Radcliffe's character on a remote beach resort. Palmer studied Dominique Swain's performance in Lolita (1997) to capture her character's overt sexuality. The film began shooting in November 2005 on the south coast of Australia. It was released on 14 September 2007 in the UK and US and 20 September 2007 in Australia and received mixed reviews and failed at the box office.

2:37 premiered at the 2006 Cannes Film Festival in Un Certain Regard selection. The film received a standing ovation, a turning point for Palmer, giving her confidence in acting as a career. The trip to Cannes lead her to meet her manager, David Seltzer, and American talent agents. She signed with the William Morris Agency.

Palmer was cast to star with Tom Sturridge in her first American feature, Jumper, a science fiction film directed by Doug Liman. Her part was later recast when the lead characters were rewritten for older actors; her role went to Rachel Bilson. Palmer was devastated from losing the role and returned to Adelaide for a few months. She made her Hollywood feature film debut in The Grudge 2 in 2006, a horror sequel starring Amber Tamblyn and Sarah Michelle Gellar. Palmer described her character, Vanessa, as "the bitchy schoolgirl". The Grudge 2 was released in North America on October 13, 2006 (Friday the 13th) to negative reviews and grossed $70 million worldwide and its $20 million budget.

In early 2007, Palmer was cast as Tori Frederking in the comedy Take Me Home Tonight, starring Anna Faris, Dan Fogler and Topher Grace. Set in the 1980s, the film was directed by Michael Dowse and released in March 2011. Take Me Home Tonight has received negative reviews from film critics and was a box office flop, failing to recoup its $19 million budget. Palmer starred in the film clip for the 2007 single "Breaking Up", by the band Eskimo Joe, shot in Newcastle. Palmer jumps into the sea with the band's singer, Kavyen Temperley. Palmer relocated from Semaphore Beach in Adelaide to Los Angeles in May 2007 to further her career, and began auditioning for films. She stated that Los Angeles was "a big adjustment" and "very different" from her home in Australia. She went through a period of loneliness and depression, and considered going back home until she made friends there. In November 2007, Palmer was cast as the villain, Talia al Ghul, in the DC Comics superhero film, Justice League of America, alongside D.J. Cotrona, Adam Brody, Anton Yelchin, Common and Megan Gale. George Miller was set to direct the film, but it was cancelled by Warner Bros. due to script rewrite issues and the 2007–2008 Writers Guild of America strike.

Palmer was the face of Sydney jeweller Jan Logan's "modern darling" collection in 2008. She was picked that year by Adam Sandler from an audition tape to play his love interest in the Walt Disney Pictures children's film, Bedtime Stories. She played an heiress, Violet Nottingham, starring alongside Guy Pearce and Courteney Cox. Sandler also put Palmer's mother and best friend in scenes in the film. It was released on 25 December 2008 and received mixed to negative reviews but grossed $212 million worldwide on its $80 million budget.

Palmer won the romantic lead in Disney's The Sorcerer's Apprentice, produced by Jerry Bruckheimer and directed by Jon Turteltaub. The film was based on the relevant section of the animated film Fantasia (1940), which was set to a short scherzo for orchestra by Paul Dukas, L'apprenti sorcier (The Sorcerer's Apprentice, published in 1897, and by far, the best known of Dukas' compositions), all of which were inspired by the eponymous poem by Johann Wolfgang von Goethe. Palmer stayed in Manhattan's West Village while filming for six months. She played Becky Barnes, a college student who is pursued by Dave Stutler (Jay Baruchel), a physics student and apprentice to the wizard Balthazar (Nicolas Cage). It was released on July 14, 2010 to mixed reviews, and grossed $215 million worldwide on its big $150 million budget. In July 2010, Parade Magazine listed the film #1 on its list of "Biggest Box Office Flops of 2010 (So Far).

Palmer has been the co-number one ticketholder, since 2009, of the Port Adelaide Football Club, along with Australian television presenter David Koch. It is a tradition for clubs to recognize a prominent supporter as the number one ticketholder. Palmer went to games with the team, she spoke at functions, and performed a game-beginning coin toss. Palmer has dated former Australian rules footballer Stuart Dew. She dated her Take Me Home Tonight co-star, actor Topher Grace, in mid- to late-2007. They reunited in 2009 after she broke up with comedian Russell Brand, and later broke up again. Palmer dated actor Scott Speedman for a year.

Palmer began dating actor/director Mark Webber in late-2012 after contacting him via Twitter. They became engaged in August 2013, and married on 21 December 2013 in Mexico. They have one son together, Bodhi Rain, born on 17 February 2014. Through her marriage, Palmer is also a stepmother to Webber's son Isaac Love (born circa 2008), from Webber's previous relationship with actress Frankie Shaw. The family resides in the Beachwood Canyon community of Los Angeles. In November 2012, Palmer and friend Phoebe Tonkin launched the health and wellness website Your Zen Life.