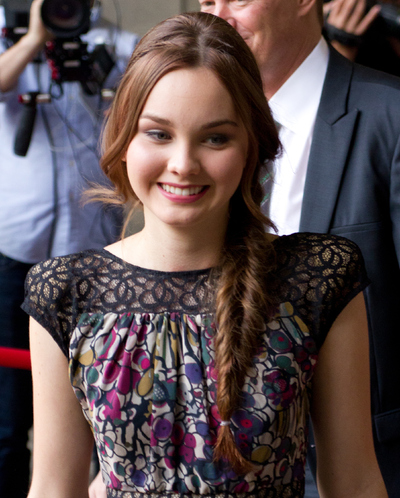 Liana Daine Liberato (born August 20, 1995) is an American television and film actress. Liana is known for the 2010 film, Trust. She starred in the Fox Faith film The Last Sin Eater and appeared in the fourth season of House episode "It's a Wonderful Lie". She was featured in the cover story of the June 4, 2006 issue of The New York Times Magazine titled "Hollywood Elementary" with her friend Hannah Marks.

Liberato was born in Galveston, Texas. Her first significant role came in "Galveston: The Musical" when she was seven. In the summer of 2005, she attended a week-long acting camp in California, where she attracted the attention of Central Artists. Charmed by Liberato's "great charisma and a very natural delivery," the agent asked Liana to travel to Hollywood.

In 2005 Liberato made her acting debut in the television series Cold Case. Liberato has continued to guest appear on television shows Sons of Anarchy, CSI: Miami and House MD. Liberato appeared in the music video for 7 Things by Miley Cyrus. In 2007 Liberato portrayed the role of the protagonist in the 20th Century Fox adventure film The Last Sin Eater. The film centers on a 10-year old girl who discovers a secret sin haunting her community. That same year she starred in the straight-to-DVD romantic drama film Safe Harbour.

In 2010 Liberato starred in the drama film Trust portraying the role of Annie Cameron, a fourteen-year old girl who is victimized by an online sexual predator. Clive Owen and Catherine Keener portray her parents with production taking place in Michigan. The film premiered at the 2010 Toronto International Film Festival. Liberato's performance received critical acclaim with Roger Ebert calling Liberato's performance "remarkable". Liberato won the Silver Hugo Award for Best Actress for her performance at the 46th Chicago International Film Festival.