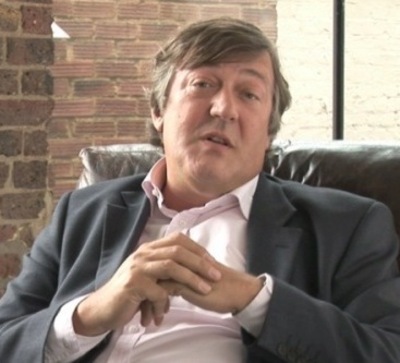 After a troubled childhood and adolescence, during which he was expelled from two schools and spent three months in prison for credit card fraud, he secured a place at Queens' College, Cambridge, where he studied English Literature. While at university, Fry became involved with the Cambridge Footlights, where he met his long-time collaborator Hugh Laurie. As half of the comic double act Fry and Laurie, he co-wrote and co-starred in A Bit of Fry & Laurie, and took the role of Jeeves (with Laurie playing Wooster) in Jeeves and Wooster.

Fry's acting roles include the lead in the film Wilde, Melchett in the BBC television series Blackadder, the titular character in the television series Kingdom, a recurring guest role as Dr. Gordon Wyatt on the crime series Bones, and as Gordon Deitrich in the dystopian thriller V for Vendetta. He has also written and presented several documentary series, including the Emmy Award-winning Stephen Fry: The Secret Life of the Manic Depressive, which saw him explore his mental illness. He is also the long-time host of the BBC television quiz show QI.

As well as his work in television, Fry has contributed columns and articles for newspapers and magazines, and has written four novels and two volumes of autobiography, Moab Is My Washpot and The Fry Chronicles. He also appears frequently on BBC Radio 4, starring in the comedy series Absolute Power, being a frequent guest on panel games such as Just a Minute, and acting as chairman for I'm Sorry I Haven't a Clue, where he was one of a trio of hosts who succeeded the late Humphrey Lyttelton. Fry is also known for his voice-overs, reading all seven of the Harry Potter novels for the UK audiobook recordings, and as the narrator in the LittleBigPlanet series of video games.

Fry was born in Hampstead, London, on 24 August 1957, the son of Marianne Eve Fry (née Newman) and Alan John Fry, who was an English physicist and inventor. Fry was raised in no religious faith. His maternal grandparents, Martin and Rosa Neumann, were Hungarian Jewish immigrants from Šurany, which is now in Slovakia. His mother's aunt and cousins died in Auschwitz. Fry grew up in the village of Bootonnear Reepham, Norfolk, having moved from Chesham, Buckinghamshire, at an early age.