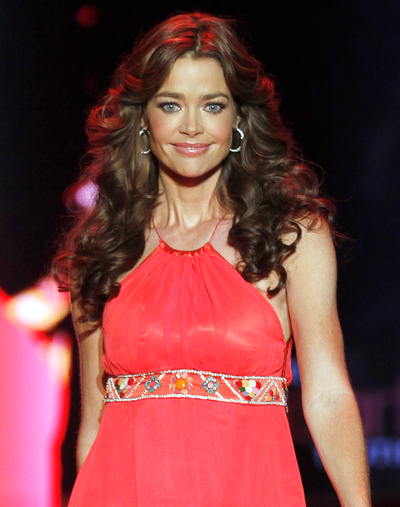 Richards was born in Downers Grove, Illinois, the daughter of Joni Lee, a coffee shop owner, and Irv Richards (born 1950), a telephone engineer. She has one sister, Michelle. Her ancestry includes Welsh, French and German. Richards grew up in both Mokena and Downers Grove. She graduated in 1989 from El Camino High School in Oceanside, California. As a child, she was the "only girl on the baseball team."

In 1990, at age 19, Richards had a rushed breast implant procedure, which led to the doctor putting in larger ones than she asked for. As Richards was preparing to film 1998's Wild Things, she had corrective breast implant procedure, with the surgeon again giving her larger implants than she expected. In 2004 Richards posed for Playboy, to "encourage women that it's OK to embrace your sexuality even though you're a mum...At the same time, I was having some problems in my marriage [to Charlie Sheen] and I didn't feel sexy and felt I had to prove something."

Richards first met actor Charlie Sheen on the set of Good Advice in 2000. However they did not begin dating until October 2001, when Richards guest-starred on Sheen's TV show Spin City. They became engaged on December 26, 2001, and married on June 15, 2002, at the estate of Spin City creator Gary David Goldberg. They have two daughters together, Sam J. Sheen (born March 9, 2004) and Lola Rose Sheen (born June 1, 2005).

In March 2005, while pregnant with their second daughter, Richards filed for divorce from Sheen. The couple briefly reconciled and sought marriage counselling. However, on January 4, 2006, Richards' representative announced that she was continuing with the divorce. She later sought a restraining order against Sheen, alleging death threats against her. On April 19, 2006, Richards filed formal legal papers seeking a divorce from Sheen under the laws of the state of California.

In 2008, Richards decided to include her two daughters with Charlie Sheen in her confessional reality program on E!, Denise Richards: It's Complicated, which premiered on May 26, 2008. He deemed her plans "greedy, vain and exploitative". On January 25, 2008, Richards won a court case against Sheen so that she could include her daughters in the show. When a judge rejected Sheen's request to block it, Sheen urged fans to boycott it. An agreement was reached between Sheen and Richards in the custody of the children, with Sheen stating in April 2009 that “we had to do what’s best for the girls.”

In June 2011, Richards adopted a third daughter, Eloise Joni, as a single parent. Her middle name is that of Richards' mother, who died from cancer in December 2007. Richards adopted her at birth domestically within the United States, following a two-year adoption process.

By summer 2012, Richards and Sheen were on good terms, often spending time together with their children. In 2012, he made a cameo appearance in her movie Madea's Witness Protection and she appeared in Sheen's television series, Anger Management on the FX network. In a move supported by Sheen, in May 2013, Richards was awarded temporary custody of Bob and Max, the twin sons born in 2008 to Sheen and third wife Brooke Mueller, after the children were removed from Mueller's home by child protective services due to concerns over drug use. Richards had previously cared for the children on other occasions as well, including during Mueller's December 2012 stint in rehab for addiction to Adderall.