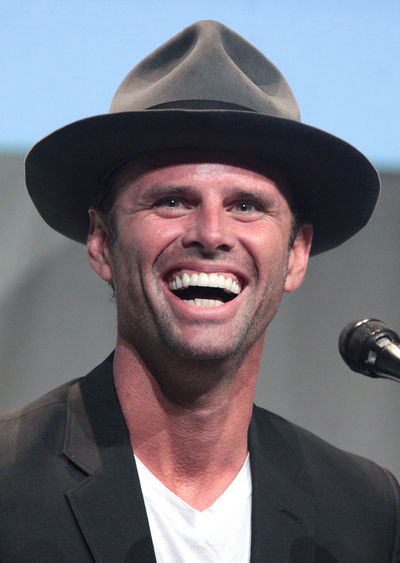 Walton Sanders Goggins Jr. (born November 10, 1971) is an American actor. On television, he played Shane Vendrell in The Shield, Boyd Crowder in Justified, and Venus Van Dam in "Sons of Anarchy". He has also appeared in films, such as That Evening Sun, The Apostle, Chrystal, Miracle at St. Anna, Predators, Lincoln, Django Unchained, Machete Kills, American Ultra and The Hateful Eight. He co-produced and starred in the 2001 short film The Accountant, which won an Academy Award for Best Live Action Short Film.

Goggins was born in Birmingham, Alabama, the son of Janet Long and Walton Sanders Goggins Sr. He was raised in Lithia Springs, Georgia, he attended Lithia Springs High School, and moved to Los Angeles at the age of nineteen. He attended Georgia Southern University for one year.

When he was 19, Goggins moved to Los Angeles to pursue a career in acting. He worked on a valet car parking service for various restaurants in the valley and sold cowboy boots. In 1990, after working in a few acting roles in Georgia, he got his first big break in Murder in Mississippi. While filming, Goggins met and became friends with Ray McKinnon, who played his father in the film, and with whom he began a creative partnership that continues to this day. Goggins played Detective Shane Vendrell in the FX series The Shield (2002–2008).

Goggins and McKinnon formed their production company Ginny Mule Pictures, which produced four films: The Accountant (a short film which won an Academy Award for Best Live Action Short Film in 2001), Chrystal (Sundance Dramatic Competition), Randy and the Mob and That Evening Sun (which won the South by Southwest Special Jury Prize 2009). Goggins and McKinnon created the series Rectify. Goggins was set to play the lead and AMC had bought the pilot script, written by McKinnon, a role which went to Aden Young when the series later went to SundanceTV.

Goggins played Boyd Crowder in the pilot episode of the FX series Justified, and was a recurring cast member in the first season of the show, while also shooting a major supporting role as a deadly death row inmate being hunted by the titular antagonists in the film Predators. In May 2010, Goggins' character was promoted to the main cast for the second season of Justified. In May 2011, he appeared in "Code of the West", a commercial for Ram Truck's "Guts & Glory" campaign. He appeared in Cowboys & Aliens as Hunt, a bandit formerly in the employ of the protagonist. In July 2011, Goggins was nominated for a Primetime Emmy Award for Outstanding Supporting Actor in a Drama Series for his role on Justified. He portrayed Billy Crash, a sadistic overseer and slave fighting trainer, in the 2012 film Django Unchained.

From 2012 to 2013, Goggins guest-starred as transgender prostitute Venus Van Damme in the FX series Sons of Anarchy. He previously worked with the show's creator, Kurt Sutter, when the latter was a writer and executive producer on The Shield. The name "Venus Van Damme" is a play on the undercover name "Cletus Van Damme" used by Shane Vendrell on The Shield.

In 2015, he played Chris Mannix in The Hateful Eight and stars in HBO's television series Vice Principals. Reviewing in The New York Times, critic Mike Hale wrote, "Walton Goggins makes a habit of being the best thing about the television shows he’s in."

Goggins received a steady stream of recognition for his professional work. With Ray McKinnon, Lisa Blount and Ginny Mule Pictures, he was recognized by the Spirit of Slamdance Award at the Slamdance Film Festival in 2001 for The Accountant, which went on to win the Academy Award for Best Live Action Short Film in 2002. Their film Chrystal appeared in the 2004 U.S. Dramatic Competition at the Sundance Film Festival, and the same trio were awarded the Spirit of Slamdance Award again for Randy and the Mob.

Goggins was nominated for a Television Critics Association Award for Individual Achievement in Drama in 2009 for his role as Detective Shane Vendrell in The Shield. In the same year, McKinnon, Goggins, Hal Holbrook and the rest of the principal cast of That Evening Sun, won the Special Jury Award for Best Ensemble Cast at the South by Southwest Film Festival competition.

Goggins was married to Canadian Leanne Kaun Goggins, owner of a Laurel Canyon, California, dog-walking business. Born in 1967, she and Goggins were estranged when she died on November 12, 2004.

Goggins married filmmaker Nadia Conners in August 2011, and they had a son, Augustus (born February 2011). Goggins showcases some of his photography on a blog that he created, when he took time off work and traveled across India.

He is active in various nonprofit organizations that range from environmental to humanitarian work, and regularly attends Global Green USA events.