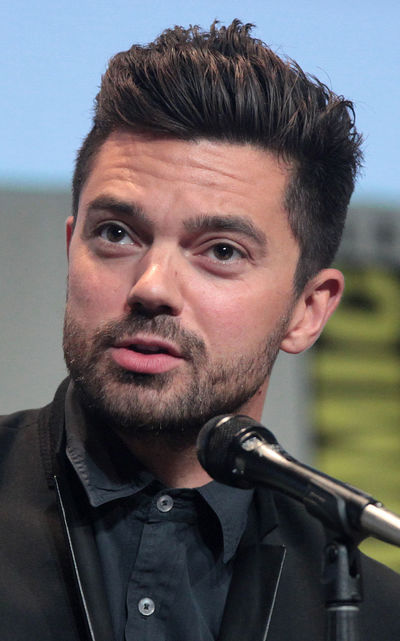 Dominic Edward Cooper (born 2 June 1978) is an English actor. He has worked in television, film, theatre and radio, in productions including Starter for 10, Mamma Mia!, The Duchess, The History Boys, The Devil's Double, Captain America: The First Avenger, Abraham Lincoln: Vampire Hunter and Dracula Untold.

Cooper was born and brought up in Greenwich, London, the son of Julie (née Heron), a nursery school teacher, and Brian Cooper, an auctioneer. His maternal great-grandfather was film enthusiast E. T. Heron, who published The Kinematograph Weekly. He attended the Thomas Tallis School in Kidbrooke, London, and trained at the London Academy of Music and Dramatic Art (LAMDA), graduating in 2000. He also attended John Ball Primary School.

He first worked in television and film before making his stage debut in Mother Clap's Molly House at the National Theatre in 2001. Cooper was involved in Alan Bennett's play The History Boys from its first reading. He also toured with the production to Broadway, Sydney, Wellington and Hong Kong as well as appearing in the radio and film adaptations of the play. He has had notable roles in the Royal National Theatre's adaptation of the His Dark Materials trilogy where he played the lead character Will Parry, the TV series Down To Earth and Sense & Sensibility.

He is possibly best known for his work in Mamma Mia!, in which he sang several songs. In the film, his character was engaged to the daughter (played by Amanda Seyfried) of the lead (Meryl Streep). He appears opposite Keira Knightley in The Duchess and can also be seen in An Education. He guest-starred in the "Aspinol" sketch in James Corden's BBC3 show Horne & Corden.

In 2009 he played Hippolytus in Phedre at the National Theatre alongside Helen Mirren and Margaret Tyzack. Also in 2009 he played an unscrupulous sub-prime mortage salesman "Diamond" Dave Matthews. In 2010, he played rock-drummer Ben in the film Tamara Drewe, and in 2011 played the leading roles of Latif Yahia and Uday Hussein in the biographical film The Devil's Double. In 2011 he also appeared as Howard Stark in the Marvel film Captain America: The First Avenger.

In 2012 he appeared as vampire Henry Sturges in Abraham Lincoln: Vampire Hunter. In 2014, he reprised his role as Stark in the Marvel One-Shot Agent Carter and later in the 2015 television mini-series of the same name. In the same year, Cooper appeared as Dino Brewster, the main antagonist, in the film Need for Speed. On December 4, 2013, Legendary Pictures announced that Cooper would be joining the cast of the Warcraft film adaptation, set to be released in June 2016.

In April 2015 Seth Rogen announced via his Twitter that Cooper was cast to play Jesse Custer, the lead role in AMC's upcoming TV series Preacher scheduled to premier mid-2016.

Cooper shared a house, for a time, with his co-star in The History Boys, James Corden, until Corden started a family with his wife.

In August 2014, Cooper was one of 200 public figures who were signatories to a letter to The Guardian opposing Scottish independence in the run-up to September's referendum on that issue.