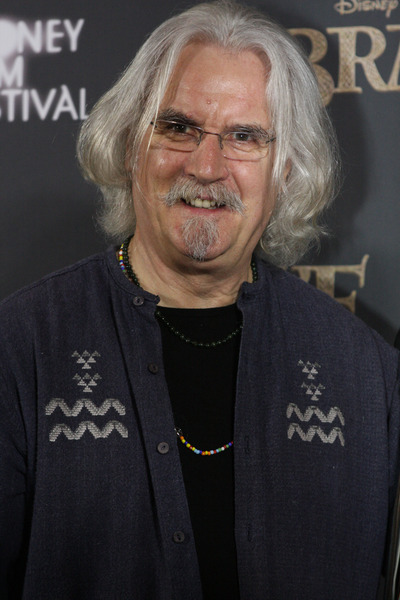 William "Billy" Connolly, Jr., CBE (born 24 November 1942) is a Scottish comedian, musician, presenter and actor. He is sometimes known, especially in his native Scotland, by the nickname 'The Big Yin' ('The Big One'). His first trade, in the early 1960s, was as a welder (specifically a boilermaker) in the Glasgow shipyards, but he gave it up towards the end of the decade to pursue a career as a folk singer in the Humblebums and subsequently as a soloist. In the early 1970s, he made the transition from folk-singer with a comedic persona to full-fledged comedian.

Connolly was born at 69 Dover Street ("on the linoleum, three floors up" "at six o'clock in the evening") in Anderston, Glasgow, to William Connolly and his wife Mary "Mamie" (McLean) Connolly, a hospital cafeteria worker. Connolly's grandfather was an Irish immigrant. In 1946, when he was barely four years old, Connolly's mother abandoned her children when his father was still away in the army. Connolly and his older sister, Florence (named after their maternal grandmother), were cared for by two aunts, Margaret and Mona Connolly, his father's sisters, who resented the children for the fact that they had to sacrifice their young lives in order to look after them. His biography, written by wife Pamela Stephenson, documented years of physical and sexual abuse by his father, which began when he was ten and lasted until he was about fifteen.

"Twice in my life, little birds have flown in and made a huge difference," explained Connolly in 1996. ]When he was seven, the Connolly family went to Rothesay on holiday. He was sent to get some milk and bread rolls. On his way back with his hands full, a bird landed on his head. Connolly immediately thought God had called him and he "nearly had a coronary". "It was a jackdaw, and I didn't know you could teach jackdaws to speak. But I was walking along, and this thing landed on my head and said hello. I nearly passed away. I learned subsequently that it was a tame bird, and we became friends and I got used to the idea: the bird would land on me and I was quite happy. My life had changed forever." Connolly said the second "bird" was Brett Whiteley, an Australian artist he met through Mark Knopfler of Dire Straits in the 1980s.

Between the ages of fourteen and twenty, Connolly was brought up in a tenement in the Anderston district of Glasgow.[5] He later lived in Partick.

He attended St. Peter's Primary School in Glasgow and St. Gerard's Secondary School in Govan.[8] At age 12, Connolly decided he wanted to become a comedian but did not think he fitted the mould, feeling he needed to become more "windswept and interesting". At 15, he left school with two engineering qualifications, one collected by mistake which belonged to a boy named Connell.[12]

Connolly was a year too young to work in the shipyards. He became a delivery boy until he was sixteen, when he was deemed overqualified (due to his J1 and J2 certificates) to become an engineer.[12] Instead, he worked as a boilermaker[11] at Alexander Stephen and Sons Shipyard in Linthouse.[12]