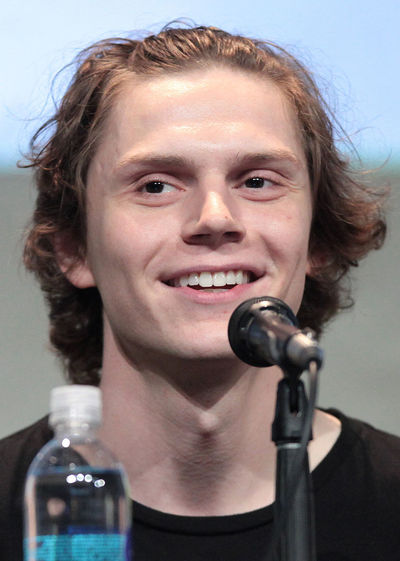 Evan Peters (born January 20, 1987) is an American actor. He made his acting debut in the 2004 drama film Clipping Adam and starred in the ABC science fiction TV series Invasion from 2005 to 2006. He is best known for his multiple roles on the FX anthology television series American Horror Story, his supporting role as Todd Haynes in the 2010 superhero film Kick-Ass, and his role as the mutant Quicksilver in the 2014 film X-Men: Days of Future Past and the 2016 sequel X-Men: Apocalypse.

Peters was born in St. Louis, Missouri, son of Julie and Phil Peters, a vice president of administration for the Charles Stewart Mott Foundation. He attended a Roman Catholic grade school. He has two siblings: a brother, Andrew, and a sister, Michelle. In 2001, Peters' family moved to Grand Blanc, Michigan, where he pursued modeling and took local acting classes. He attended Grand Blanc Community High School, before moving to Los Angeles at age 15 with his mother to pursue his acting career. He attended Burbank High School as a sophomore, but later began homeschooling classes.

On his second audition, Peters was chosen by producer Michael Picchiottino for the role of Adam Sheppard in the film Clipping Adam. The role earned him the award for Best Breakthrough Performance at the Phoenix Film Festival. He performed in numerous television commercials for Sony PlayStation, Progressive Insurance, Moviefone, Sour Patch Kids, Papa John's Pizza, and Kellogg. In 2004, he starred in the MGM film Sleepover as Russell "SpongeBob" Hayes, and appeared in the ABC series The Days as Cooper Day. From 2004 to 2005, he had a recurring role as Seth Wosmer in the first season of the Disney Channel series Phil of the Future. From 2005 to 2006, he portrayed Jesse Varon in the ABC sci-fi thriller series Invasion.

Peters then had supporting roles in the films An American Crime (2007), Gardens of the Night (2008), Never Back Down (2008) and its sequel Never Back Down 2: The Beatdown (2011). He has also starred in several theater plays, including playing Fagin in a production of Oliver Twist at the Met Theater. In 2008, he had a recurring role as Jack Daniels on The CW teen-drama series One Tree Hill. In addition, he landed many one episode guest spots in television series such as The Mentalist, House, Monk, The Office, In Plain Sight, and Parenthood. In 2010, he appeared in the supporting role of Todd Haynes, the main character's best friend, in the critically acclaimed superhero film Kick-Ass. Peters was unable to reprise his role in the 2013 sequel due to scheduling conflicts with his role in the second season of American Horror Story.

Peters' breakthrough role was playing the teenage sociopathic murderer Tate Langdon in the first season of the FX anthology series American Horror Story. In the second season, subtitled Asylum, he starred as Kit Walker, a man wrongly accused of killing his wife; this role earned him a nomination for the Satellite Award for Best Supporting Actor – Series, Miniseries or Television Film. In the third season, subtitled Coven, he portrayed Kyle Spencer, a frat boy who is killed and brought back to life as a Frankenstein's monster type of creature. In the fourth season of the series, subtitled Freak Show, he played Jimmy Darling, a circus performer with deformed hands.

In 2014, Peters starred in the independent comedy film Adult World, opposite John Cusack and Emma Roberts. In May 2013, director Bryan Singer announced that Peters had been cast as the mutant Quicksilver in the 2014 film X-Men: Days of Future Past. He will reprise his role in the next film in the series, X-Men: Apocalypse. In 2015, Peters starred in the horror film The Lazarus Effect, he next appeared in the drama film Safelight alongside Juno Temple, and the comedy-drama Elvis & Nixon.

Peters began dating actress Emma Roberts in 2012 after they worked together on the film Adult World. In July 2013, while they were staying at a hotel in Montreal, Canada, someone overheard a dispute coming from their room and called the police. After a "heated argument", they had begun hitting each other. When the police arrived, they arrested Roberts. Peters was not arrested because Roberts did not have any immediately visible injuries. Peters declined to press charges and Roberts was released several hours later. In a joint statement, the couple called it "an unfortunate incident and misunderstanding," and stated that they were "working together to move past it." Peters confirmed in March 2013 that he and Roberts were engaged, but they ended their engagement in June 2015. In October 2015 it was reported that they had reconciled.