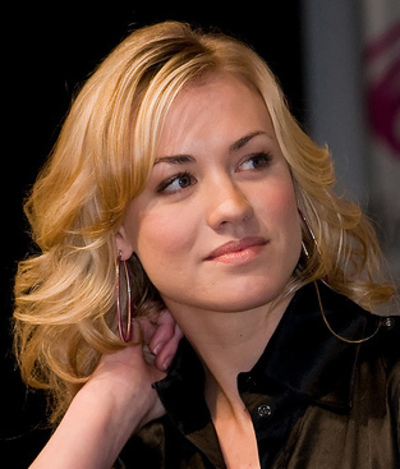 Yvonne Strahovski (born Yvonne Jaqueline Strzechowski; 30 July 1982) is an Australian actress. After graduating from the University of Western Sydney, she began her career working in Australian television. She then moved to America and is best known for her roles as CIA Agent Sarah Walker in the NBC television series Chuck (2007–2012) and as Hannah McKay in the Showtime series Dexter (2012–2013). She is also noted as the voice and model of Miranda Lawson in the Mass Effect video game trilogy.

Strahovski was born in Werrington Downs, a suburb of Sydney, as Yvonne Jaqueline Strzechowski, to Bożena and Piotr Strzechowski. Her parents had emigrated from Tomaszów Mazowiecki, Poland. Strahovski speaks Polish and English. She adopted the more phonetic spelling of Strahovski as her stage name at Chuck, which was at producer Josh Schwartz's behest for the sake of easier pronunciation. Strahovski's father is an electronic engineer, and her mother works as a lab technician. Strahovski started acting when she played Viola in a school production of Twelfth Night.

Strahovski started her career in Australia appearing in film and TV roles, including a turn on satirical show Double the Fist and a part as Freya Lewis in the Australian drama series headLand. She has also appeared in Channel Nine's Sea Patrol.

She sent in her audition tape for the show Chuck while in the United States auditioning for roles in other shows, namely NBC's 2007 series Bionic Woman. She sent in an audition tape while waiting to hear from the other two jobs. She was contacted by the producers of Chuck the next day to come in and run lines with Zachary Levi. The producers called her back a week later letting her know she had been cast as Sarah Walker. Six months later, she moved to the United States.

Strahovski appears in Mass Effect Galaxy, Mass Effect 2 and Mass Effect 3 as the voice of Miranda Lawson. Strahovski had her face scanned and animated so she could portray Lawson in Mass Effect 2. Strahovski voices Aya Brea in the English version of the Parasite Eve spinoff, The 3rd Birthday, which was released on March 2011 for the PlayStation Portable. She also appeared in a CollegeHumor sketch in April 2011, parodying the music styles of Katy Perry, Ke$ha, Lady Gaga and Justin Bieber.

In November 2011, she was cast as the female lead in I, Frankenstein (2014). In March 2012, she was featured in a new SoBe Life commercial. And in May 2012, Strahovski ranked #35 inMaxim Hot 100 2012. In June 2012 Showtime announced Strahovski had joined the cast for the seventh season of Dexter in which she plays the role of Hannah McKay, a woman involved with an investigation following the death of her former lover, a spree killer whom she accompanied. She reprised her role as Hannah McKay in the eighth season of Dexter. In December 2012, she made her Broadway debut in a revival of Clifford Odets' Golden Boy for which she won a Theatre World Award. Yvonne Strahovski is a supporter of PETA and appeared in an ad for their "Adopt, Don't Buy" campaign. Yvonne Strahovski was honored along with Liam Hemsworth for their work in international roles with the 2012 Australians in Film Breakthrough Award.

In January 2014, it was announced at Television Critics Association's press panel that Strahovski will be starring in FOX's upcoming TV series 24: Live Another Day cast as Kate Morgan, CIA agent.