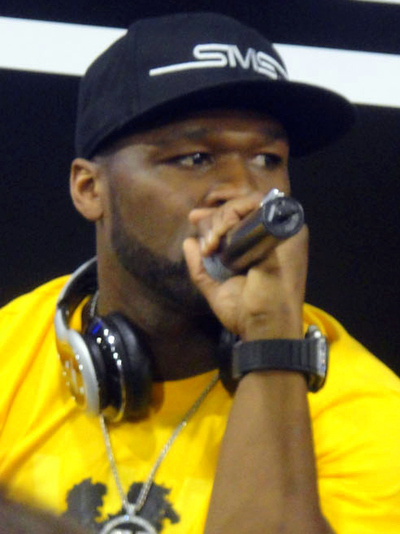 Curtis James Jackson III (born July 6, 1975), better known by his stage name 50 Cent, is an American rapper, entrepreneur, investor, and actor. He rose to fame with the release of his albums Get Rich or Die Tryin' (2003) and The Massacre (2005). His album Get Rich or Die Tryin' has been certified eight times platinum by the RIAA.

Born in the South Jamaica neighbourhood of the borough of Queens, New York City, Jackson began drug dealing at the age of twelve during the 1980s crack epidemic. After leaving drug dealing to pursue a rap career, he was shot at and struck by nine bullets during an incident in 2000. After releasing his album Guess Who's Back? in 2002, Jackson was discovered by rapper Eminem and signed to Interscope Records. With the help of Eminem and Dr. Dre, who produced his first major commercial successes, Jackson became one of the world's highest selling rappers. In 2003, he founded the record label G-Unit Records, which signed several successful rappers such as Young Buck, Lloyd Banks, and Tony Yayo.

Jackson has engaged in feuds with other rappers including Ja Rule, Nas, Fat Joe, Jadakiss, Cam'ron, Puff Daddy, Rick Ross, and former G-Unit members The Game and Young Buck. He has also pursued an acting career, appearing in the semi-autobiographical film Get Rich or Die Tryin' in 2005, the Iraq War film Home of the Brave in 2006, and Righteous Kill in 2008. 50 Cent was ranked as the sixth-best artist of the 2000s by Billboard magazine. The magazine also ranked him as the fourth top male artist and as the third top rapper behind Eminem and Nelly. Billboard magazine also ranked him as the sixth best and most successful Hot 100 Artist of the 2000s and as the number one rap artist of the 2000s. Billboard ranked his album Get Rich or Die Tryin' as the twelfth best album of the 2000s and his album The Massacre as the 37th best album of the 2000s. 50 Cent is currently working on his fifth studio album, Street King Immortal, which is to be released in Spring 2013.

Curtis Jackson III was born and raised in South Jamaica, a poverty-stricken urban neighborhood in Queens, New York City. He was raised solely by his mother, Sabrina, who gave birth to him at the age of fifteen. 50 Cent stated that his mother worked as a cocaine dealer and was a lesbian. The line "Coming up I was confused, my mommy kissing a girl" from Hate It or Love It featuring The Game also refers to his mother's sexuality. In 1983, she became unconscious after having consumed a drugged drink and eventually died as a result of the gas in her apartment turned on amidst closed windows. Following her death, Jackson moved into his grandparents' house with his eight aunts and uncles. He recalls, "My grandmother told me, 'Your mother's not coming home. She's not gonna come back to pick you up. You're gonna stay with us now.' That's when I started adjusting to the streets a little bit".

At age eleven, Jackson started boxing. The following year, Jackson started working with narcotics but informed his grandparents he attended school programs. During this time, he began bringing guns and drug money to school. When Jackson was fourteen years old, a neighbor opened a boxing gym for local youth. He recalled: "When I wasn't killing time in school, I was sparring in the gym or selling crack on the strip." In the mid-1980s, Jackson competed in the Junior Olympics as an amateur boxer. He later stated: "I was competitive in the ring and hip-hop is competitive too... I think rappers condition themselves like boxers, so they all kind of feel like they're the champ". At the age of sixteen, he was caught by metal detectors at Andrew Jackson High School. He later explained that he was embarrassed by his subsequent arrest and confessed to his grandmother that he was selling drugs.

Afterwards, Jackson was sent to correctional boot camp. Following his release, he adopted the nickname "50 Cent" as a metaphor for "change". The name was derived from Kelvin Martin, a Brooklyn robber known as "50 Cent". Jackson chose the name "because it says everything I want it to say. I'm the same kind of person 50 Cent was. I provide for myself by any means".

In 1996, when he was 21 years old, Jackson started rapping in a friend's basement. He used turntables to record over instrumentals. Another friend introduced him to Jam Master Jay of Run-DMC who was organizing his label Jam Master Jay Records. Jay taught Jackson how to count bars, write choruses, structure songs, and create a record. Jackson's first official appearance was on a song titled "React" with the group Onyx on their 1998 album Shut 'Em Down. He credited Jam Master Jay as an influence who helped him improve his ability to write hooks. Jay produced Jackson's first album. The album was shelved and never released.

In 1999, after leaving Jam Master Jay, the platinum-selling producers Track masters took notice of Jackson and signed him to Columbia Records. They sent him to a studio in Upstate New York where he produced thirty-six songs in two weeks.[11] Eighteen were included on his unofficially released album, Power of the Dollar in 2000. He also started the now-defunct Hollow Point Entertainment with former G-Unit affiliate Bang 'Em Smurf.

Jackson's popularity increased after the controversial underground single, "How to Rob", which he wrote in thirty minutes while in a car on the way to his studio. The track comically explains how he would rob famous artists. He explained the reasoning behind song's content as, "There's a hundred artists on that label, you gotta separate yourself from that group and make yourself relevant". Rappers Jay-Z, Kurupt, Sticky Fingaz, Big Pun, DMX, Wyclef Jean and the Wu-Tang Clan replied to the song and Nas, who received the track positively, invited Jackson to travel on a promotional tour for his Nastradamus album. The song was intended to be released with "Thug Love" featuring Destiny's Child, but two days before he was scheduled to film the "Thug Love" music video, Jackson was shot and confined to a hospital due to his injuries.

In 2002, Eminem listened to a copy of Jackson's Guess Who's Back? CD. He received the CD through Jackson's attorney, who was working with Eminem's manager Paul Rosenberg.[28]Impressed with the album, Eminem invited Jackson to fly to Los Angeles, where he was introduced to Dr. Dre. After signing a $1 million record deal, Jackson released the mixtape, No Mercy, No Fear. It featured one new track, "Wanksta", which was put on Eminem's 8 Mile soundtrack. He was also signed to Chris Lighty's Violator Management and Sha Money XL's Money Management Group.

In February 2003, Jackson released his commercial debut album, Get Rich or Die Tryin'. Allmusic described it as "probably the most hyped debut album by a rap artist in about a decade". Rolling Stone noted the album for its "dark synth grooves, buzzy keyboards and a persistently funky bounce" with Jackson complementing the production in "an unflappable, laid-back flow". Get Rich or Die Tryin' debuted at number one on the Billboard 200, selling 872,000 copies in the first four days. The lead single, "In da Club", which The Source noted for its "blaring horns, funky organs, guitar riffs and sparse hand claps", broke a Billboard record as the most listened-to song in radio history within a week.

In 2007, Jackson was the second wealthiest performer in the rap industry, behind Jay-Z. He resides in Farmington, Connecticut, in the former mansion of ex-boxer Mike Tyson. He is consistently ranked among the richest figures in the American hip hop scene. In 2011, Jackson was ranked the fifth richest figure in American hip hop with a net worth estimated at $100 million.

On October 13, 1997, Jackson's then-girlfriend Shaniqua Tompkins gave birth to their only child, a son named Marquise Jackson. The birth of Jackson's son Marquise changed his outlook on life. He stated: "When my son came into my life, my priorities changed, because I wanted to have the relationship with him, that I didn't have with my father." He credited his son for inspiring his career and being "motivation to go in a different direction".