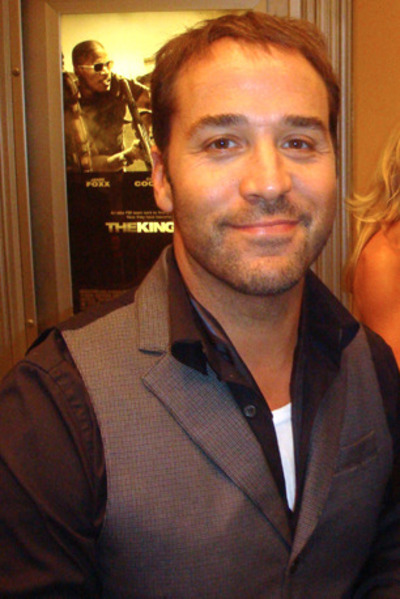 Jeremy Samuel Piven (born July 26, 1965) is an American actor and producer. He is best known for his role as Ari Gold in the comedy series Entourage, for which he has won one Golden Globe Award, three consecutive Emmy Awards, and several other nominations for Best Supporting Actor. He is also known for playing the titular role in the British drama series Mr Selfridge as well as Jerry Capen on The Larry Sanders Show.

Piven was born in Manhattan, New York, and grew up in Evanston, Illinois. He was raised in a Reconstructionist Jewish household. He graduated from Evanston Township High School, and attended Harand Theater Camp in Elkhart Lake, Wisconsin as a teenager. He played Bernardo in West Side Story there. In Illinois, he trained at Piven Theatre Workshop, founded by his parents, Byrne Piven and Joyce Hiller Piven (née Goldstein), both of whom were actors and drama teachers. He also attended Drake University in Des Moines, Iowa, where he earned a degree in theater and is an alumnus of the Pi Kappa Alpha fraternity. He spent a semester at the National Theater Institute in Waterford, Connecticut. He has appeared in a number of films with John Cusack, who is also from Evanston and is a fellow alumnus of the Piven Theatre Workshop (as are Cusack's sisters Joan and Ann). Piven and Cusack once shared an apartment and have been friends since high school. Piven was breifly mentioned in the Season 10 episode of cartoon sitcom The Simpsons in the Episode Homer to the Max and is quoted by homer who asks "Who's Jeremy Piven".

Piven's first important role came in 1992 when he became a regular cast member on HBO's The Larry Sanders Show, in which he played the head writer Jerry. In 1993, he portrayed George Costanza on the show-within-a-show scene in the Seinfeld episode, "The Pilot". Piven was also the star and producer of the short-lived ABC dramedy series Cupid, and was a supporting cast member on the last three seasons of the sitcom Ellen. He played the part of Ellen's cousin, Spence. He also voiced Elongated Man in three episodes of Justice League Unlimited

Beginning in 2004, Piven scored a significant success playing a fast-talking, acerbic Hollywood agent Ari Gold in the HBO series Entourage. He received Emmy nominations for best supporting actor four straight years from 2005 to 2008, and won the award in 2006, 2007, and 2008. 2009 was the first year in which he did not receive an Emmy Award nomination for his work on Entourage.

Piven was born to Jewish parents (of Russian origin) and considers himself a Jewish Buddhist. He starred in the Travel Channel special Jeremy Piven's Journey of a Lifetime detailing his journey across India. Piven resides in Malibu, California. His sister is director Shira Piven, whom he describes as one of his first acting teachers; his brother-in-law is director Adam McKay.