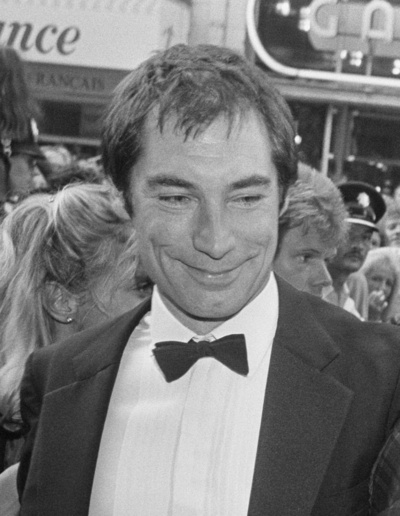 Dalton is known for portraying James Bond in The Living Daylights (1987) and Licence to Kill (1989), as well as Rhett Butler in the television miniseries Scarlett (1994), an original sequel to Gone with the Wind. In addition, he is known for his roles as Philip II of France in The Lion In Winter; Heathcliff in Wuthering Heights (1970); Edward Rochester in Jane Eyre (1983); Prince Barin in Flash Gordon (1980); and various roles in Shakespearean films and plays such as Romeo and Juliet, King Lear, Henry V, Love's Labour's Lost, Henry IV, Part 1 and Henry IV, Part 2. Recently, he had a voice acting part inToy Story 3 as Mr. Pricklepants. He has also appeared as Skinner in the mystery comedy film Hot Fuzz; portrayed the recurring character of Alexei Volkoff in the US TV series Chuck; and Rassilon in the Doctor Who two-part episode "The End of Time".

Dalton was born in Colwyn Bay, Denbighshire, North Wales to an English father, who was a captain in the Special Operations Executive during World War II and had become an advertising executive at the time of his son's birth, and an American mother of Italian and Irish descent. Before his fourth birthday, the family moved back to England to Belper in Derbyshire. While in Belper, he attended the Herbert Strutt Grammar School. As a teenager, he was a member of the Air Cadets. He decided to become an actor at 16 after seeing a production of Macbeth. He left school in 1964 to enroll in the Royal Academy of Dramatic Art and tour with the National Youth Theatre. Dalton did not complete his RADA studies, leaving the academy in 1966 to join the ensemble of the Birmingham Repertory Theatre.

Dalton quickly moved to television, working mainly with BBC and, in 1968, made his film debut as Philip II of France in The Lion in Winter.

With two notable exceptions, the films Mary, Queen of Scots (1972) and Permission to Kill (1975), he remained a theatre actor until 1978. That year he starred in Sextette as the husband of 85-year-old Mae West, hailing his return to cinema and the beginning of his American career. While in the United States, Dalton worked mainly in television, although he starred in several films.

Dalton had been considered for the role of James Bond several times. According to the documentary Inside The Living Daylights, the producers first approached Dalton in 1968 for On Her Majesty's Secret Service although Dalton himself in this same documentary claims the approach occurred when he was either 24 or 25 and had already done the film Mary, Queen of Scots (1971). Dalton told the producers that he was too young for the role. In a 1987 interview, Dalton said, "Originally I did not want to take over from Sean Connery. He was far too good, he was wonderful. I was about 24 or 25, which is too young. But when you've seen Bond from the beginning, you don't take over from Sean Connery." In either 1979 or 1980, he was approached again, but did not favour the direction the films were taking, nor did he think the producers were seriously looking for a new 007. As he explained, his idea of Bond was different. In a 1979 episode of the television series Charlie's Angels, Dalton played the role of Damien Roth, a millionaire playboy described by David Doyle's character as "almost James Bond-ian".

In 1986, Dalton was approached to play Bond after Roger Moore had retired, and Pierce Brosnan could not get out of contractual commitments to the television series Remington Steele. However, Dalton would soon begin filming Brenda Starr and could do The Living Daylights only if the Bond producers waited six weeks.

Dalton's first appearance as 007, The Living Daylights (1987) was critically successful, and grossed more than the previous two Bond films with Moore, as well as contemporary box-office rivals such as Die Hard and Lethal Weapon. However, his second film, Licence to Kill (1989), although almost as successful as its predecessor in most markets, did not perform as well at the U.S. box office, in large part due to a lacklustre marketing campaign, after the title of the film was abruptly changed from Licence Revoked. The main factor for the lack of success in the U.S. was that it was released at the same time as the hugely successful Indiana Jones and the Last Crusade, Tim Burton's Batman, and Lethal Weapon 2, during the summer blockbuster season. In the United Kingdom - one of its critical markets, the film was also hampered by receiving a 15 certificate from the British Board of Film Classification which severely affected its commercial success. Future Bond films, following the resolution of legal and other issues, were all released between 31 October and mid-December, in order to avoid the risk of a summer failure, as had happened to Licence To Kill.

Unlike Moore, who had played Bond as more of a light-hearted playboy, Dalton's portrayal of Bond was darker and more serious. Dalton pushed for renewed emphasis on the gritty realism of Ian Fleming's novels instead of fantasy plots and humour. Dalton stated in a 1989 interview:

"I think Roger was fine as Bond, but the films had become too much techno-pop and had lost track of their sense of story. I mean, every film seemed to have a villain who had to rule or destroy the world. If you want to believe in the fantasy on screen, then you have to believe in the characters and use them as a stepping-stone to lead you into this fantasy world. That's a demand I made, and Albert Broccoli agreed with me."