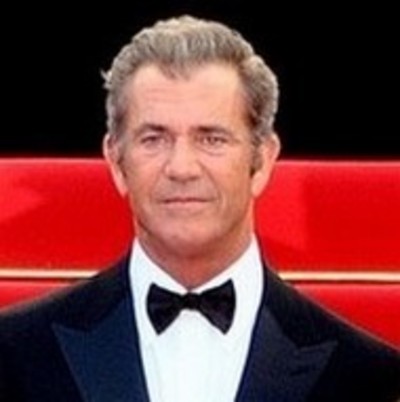 Mel Colm-Cille Gerard Gibson AO (born 3 January 1956) is an American actor, film director, producer and screenwriter. He was born in Peekskill, New York, moved with his parents to Sydney, Australia, when he was 12 years old, and later studied acting at the Australian National Institute of Dramatic Art.

After appearing as an action hero during the 1980s, Gibson went on to found Icon Entertainment, a Production Company which independent film director Atom Egoyan has called, "an alternative to the studio system."

In 1995, Gibson produced, directed, and starred in the Academy Award-winning Braveheart. In 2004, he directed and produced The Passion of the Christ, a globally successful film depicting the last hours in the life of Jesus Christ.

Gibson was born in Peekskill, New York, the sixth of eleven children, and the second son of Hutton Gibson and Irish-born Anne Patricia (née Reilly, died 1990). His paternal grandmother was opera contralto Eva Mylott (1875–1920), who was born in Australia to Irish parents. One of Gibson's younger brothers, Donal, is also an actor. Gibson's first name comes from Saint Mel, fifth-century Irish saint, and founder of Gibson's mother's native diocese, Ardagh, while his second name, Colm-Cille, is also shared by an Irish saint and is the name of the parish in County Longford where Gibson's mother was born and raised. Because of his mother, Gibson holds dual Irish and American citizenship.

Soon after being awarded US$145,000 in a work-related-injury lawsuit against New York Central Railroad on 14 February 1968, Hutton Gibson relocated his family to West Pymble, Sydney. Mel Gibson was 12 years old at the time. The move to Hutton's mother's native Australia was for economic reasons, and because Hutton thought the Australian Defence Forces would reject his oldest son for the draft during the Vietnam War.

Gibson was educated by members of the Congregation of Christian Brothers at St Leo's Catholic College in Wahroonga, New South Wales, during his high school years.

Gibson studied at the National Institute of Dramatic Art (NIDA) in Sydney. The students at NIDA were classically trained in the British-theater tradition rather than in preparation for screen acting. As students, Gibson and actress Judy Davis played the leads in Romeo and Juliet, and Gibson played the role of Queen Titania in an experimental production of A Midsummer Night's Dream. After graduation in 1977, Gibson immediately began work on the filming of Mad Max, but continued to work as a stage actor, and joined the State Theatre Company of South Australia in Adelaide.

While a student at NIDA, Gibson made his film debut in the 1977 film Summer City, for which he was paid $400.

Gibson then played the title character in the film Mad Max (1979). He was paid $15000 for this role. Shortly after making the film he did a season with the South Australian Theatre Company. During this period he shared a $30 a week apartment in Adelaide with his future wife Robyn. After Mad Max Gibson also played a mentally slow youth in the film Tim.

Mel Gibson's first American film was Mark Rydell's 1984 drama The River, in which he and Sissy Spacek played struggling Tennessee farmers. Gibson then starred in the Gothic romance Mrs. Soffel for Australian director Gillian Armstrong. He and Matthew Modine played condemned convict brothers opposite Diane Keaton as the warden's wife who visits them to read the Bible. In 1985, after working on four films in a row, Gibson took almost two years off at his Australian cattle station. He returned to play the role of Martin Riggs in Lethal Weapon, a film which helped to cement his status as a Hollywood "leading man".

Gibson met Robyn Denise Moore in the late 1970s soon after filming Mad Max when they were both tenants at a house in Adelaide. At the time, Robyn was a dental nurse and Mel was an unknown actor working for the South Australian Theatre Company. On 7 June 1980, Mel and Robyn Gibson were married in a Roman Catholic church in Forestville, New South Wales. They have one daughter, six sons, and three grandchildren as of 2011.

After 26 years of marriage, Mel and Robyn Gibson separated on 29 July 2006. In a 2011 interview, Gibson stated that the separation began the day following his arrest for drunk driving in Malibu. Robyn Gibson filed for divorce on 13 April 2009, citing irreconcilable differences. In a joint statement, the Gibsons declared, "Throughout our marriage and separation we have always strived to maintain the privacy and integrity of our family and will continue to do so." The divorce filing followed the March 2009 release of photographs appearing to show him on a beach embracing Russian pianist Oksana Grigorieva. Gibson's divorce was finalized on 23 December 2011, and the settlement with his ex-wife was said to be the highest in Hollywood history at over $400,000,000.

On 28 April 2009, Gibson made a red carpet appearance with Grigorieva. Grigorieva, who had previously had a son with actor Timothy Dalton, gave birth to Gibson's daughter Lucia on 30 October 2009. In April 2010, it was made public that Gibson and Grigorieva had split. On 21 June 2010, Grigorieva filed a restraining order against Gibson to keep him away from her and their child. The restraining order was modified the next day regarding Gibson's contact with their child. Gibson obtained a restraining order against Grigorieva on 25 June 2010. In response to claims by Grigorieva that an incident of domestic violence occurred in January 2010, the Los Angeles County Sheriff's Department launched a domestic violence investigation in July 2010.

On 9 July 2010, some audio recordings alleged to be of Gibson were posted on the internet. The same day Gibson was dropped by his agency, William Morris Endeavor. Civil rights activists alleged that Gibson had shown patterns of racism, sexism and anti-Semitism and called for a boycott of Gibson's movies.

Gibson's estranged wife, Robyn Gibson, filed a court statement declaring that she never experienced any abuse from Gibson, while forensic experts have questioned the validity of some of the tapes. In March 2011, Mel Gibson agreed to plead no contest to a misdemeanor battery charge.

In April 2011, Gibson finally broke his silence about the incident in question. In an interview with Deadline.com, Gibson expressed gratitude to longtime friends Whoopi Goldberg and Jodie Foster, both of whom had spoken publicly in his defense. About the recordings, Gibson said,

"I've never treated anyone badly or in a discriminatory way based on their gender, race, religion or sexuality – period. I don't blame some people for thinking that though, from the garbage they heard on those leaked tapes, which have been edited. You have to put it all in the proper context of being in an irrationally, heated discussion at the height of a breakdown, trying to get out of a really unhealthy relationship. It's one terribly awful moment in time, said to one person, in the span of one day and doesn't represent what I truly believe or how I've treated people my entire life."

In the same interview, Gibson stated,

"I was allowed to end the case and still maintain my innocence. It's called a West Plea and it's not something that prosecutors normally allow. But in my case, the prosecutors and the judge agreed that it was the right thing to do. I could have continued to fight this for years and it probably would have come out fine. But I ended it for my children and my family. This was going to be such a circus. You don't drag other people in your life through this sewer needlessly, so I'll take the hit and move on."

In the August 2011 Gibson settled with Grigorieva and she was awarded $750,000, joint legal custody and a house in Sherman Oaks, California until their 3-year-old daughter Lucia turns 18. In 2013 Grigorieva sued her attorneys accusing them of advising her to sign a bad agreement, including one with Gibson that holds her taking legal action against him would compromise her financial settlement.