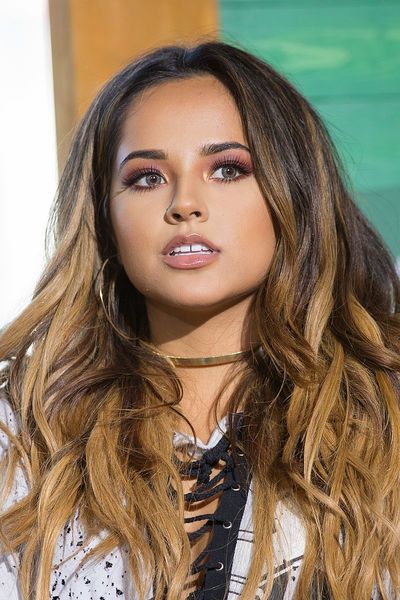 Rebbeca Marie Gomez (born March 2, 1997), better known by her stage name Becky G, is an American singer, songwriter, rapper, actress and model. Gomez first gained recognition in 2011 when she began posting videos of herself covering popular songs online. One of her videos caught the attention of producer Dr. Luke, who subsequently offered her a joint record deal with Kemosabe Records and RCA Records. While working on her debut effort, Gomez collaborated with artists will.i.am, Cody Simpson and Cher Lloyd. Her official debut single, "Becky from the Block" (2013), received a positive reception upon its release. She released her debut extended play, Play It Again (2013), later that same year. Her second single, "Can't Get Enough" (2014), featured guest vocals from Pitbull and went on to top the Latin Rhythm Airplay chart in the United States.

Gomez achieved mainstream success with the release of "Shower" (2014), which went on to enter the top twenty of the Billboard Hot 100 chart. The single would go on to receive a multi platinum certification from the Recording Industry Association of America (RIAA), denoting two million units sold in the country. Following the success of "Shower", Gomez released "Can't Stop Dancin'" (2014) and "Break a Sweat" (2015) as singles from her forthcoming album; neither matched the commercial performance of their predecessor. She embarked on a co-headlining tour with J Balvin throughout September and October 2015, spanning throughout the United States. She portrayed Valentina Galindo in two episodes of the musical television series Empire, contributing two new songs to the soundtrack of the series. Gomez was featured on the song "Superstar" (2016) with Pitbull. She released her first Spanish single, "Sola" (2016), which is set to appear on her debut studio album. Gomez is also set to star as Trini Kwan in the superhero film Power Rangers (2017).

Rebbeca Marie Gomez was born on March 2, 1997 and was raised in Inglewood, California. She is the daughter of Alejandra and Francisco "Frank" Gomez; she is of Mexican descent. Gomez has two brothers, Frankie and Alex, and a younger sister, Stephanie. Gomez grew up in poverty, and at the age of nine her family moved into the converted garage of her grandparents house. Gomez began working part-time jobs to help support her family, doing commercials and voice over work. She had what she described as a "mid-life crisis" when she was nine years old, and decided she wanted to pursue a music career. She was quoted as stating "That was literally my mid-life crisis when I was nine years old. That's when I felt like, 'OK, I gotta get my life together. What am I gonna do?' I pushed that on myself at a younger age than the average kid because at the time my family had lost our home. I've always been more mature for my age, so I was already understanding what they were going through. And I just thought, 'How can I help them?'" She initially attended public school, though had to undergo home schooling due to issues with bullying. She claimed that at one point she was jumped by multiple girls while in the restroom, and was a frequent target due to her jobs in the entertainment industry. Gomez appeared in the short film El Tux (2008) as Claudia Gómez. She appeared as Nina in the Discovery Channel television film La estación de la Calle Olvera (2008).

She became a member of a girl group named G.L.A.M. in 2009, and later joined B.C.G., another girl group. She filmed a music video as part of G.L.A.M. for a song titled "JellyBean" in 2009. During this time, Gomez also began recording herself singing and rapping songs using Garageband, and created a YouTube account to post covers of popular songs online. She also began writing her own songs during this time, and by the age of thirteen had taught herself how to play guitar. Gomez befriended production duo The Jam when she was thirteen, who liked Gomez's written material. The trio began working on material together, resulting in covers of the songs "Otis" (2011), "Lighters" (2011), and "Novacane" (2011). These songs were meant to be part of a mixtape, titled @itsbeckygomez, though this project never came to fruition. Her cover of "Otis" caught the attention of renowned producer Dr. Luke, who had worked with artists including Britney Spears and Miley Cyrus, among others. Luke scheduled a meeting with Gomez, and asked her to play guitar for him; he later signed her to his Kemosabe Records record label, through RCA Records. In reference to her video clip for "Otis", Luke claimed "I would have signed her off that video alone. I was 100 percent in. She has so much personality and her voice just pops out of the speakers. Then I met her and discovered she could also sing and play the guitar and I thought, 'This is even better.' Then I found out she could write and it was like, 'What else are you going to tell me, that you’re also Van Gogh?' Her potential is limitless." Shortly after signing with the label, Gomez began work on her debut album.

2012–15: Commercial success with music and acting

While working on her debut album, Gomez released her first single "Problem" featuring Will.i.am, which was subsequently remixed into "Problem (The Monster Remix)" for the Sony Pictures Animation film Hotel Transylvania; the song served as a promotional single and also appeared in the movie in the end credits. Gomez and will.i.am filmed a music video for the song; it features both artists in a hotel while scenes from the movie also appear.  She is featured on Cody Simpson's song "Wish U Were Here" (2012), serviced as the second single from his debut studio album. She worked with Cher Lloyd on the song "Oath" (2012), which was released as the fourth single from her debut album. The single had some commercial success, becoming Gomez's first song to chart on the Billboard Hot 100. The track was later certified gold by the Recording Industry Association of America (RIAA), denoting sales of 500,000 copies in the country. She also worked with Michel Teló on a remix of his song "Ai Se Eu Te Pego" (2012). Gomez is featured on a remix of Kesha's top ten single "Die Young" (2012) alongside Juicy J and Wiz Khalifa; the remix was featured on the Japanese deluxe edition of Kesha's second studio album, Warrior (2012).

On April 8, Gomez released "Becky from the Block" (2013) as her debut single. The song heavily samples the Jennifer Lopez song "Jenny from the Block" (2003). Gomez filmed a music video in her neighborhood, with Lopez herself making a cameo in the clip. Entertainment Tonight described the version to have "give[n] Jenny's NY-based tune a West Coast slant". That May, Gomez released a new song, "Play It Again" (2013), for digital download. The track served as a promotional single, and was not an official single released by Gomez. On July 13, Gomez released her debut extended play, also titled Play It Again (2013). The album contained five songs on the standard edition, and its name was chosen by Gomez's fans. "Can't Get Enough" (2014), which features a guest rap from Pitbull, was serviced as the lead single from the project. The song went on to top the Latin Rhythm Airplay chart in the United States, marking her first number one single on a Billboard chart. Gomez later filmed a music video for the song "Built For This" (2013), which she directed on her own. She recorded the song "Quiero Bailar (All through the Night)" (2013) with 3Ball MTY, which sees Gomez singing in both English and Spanish. The song was intended to be used for their second studio album.

Gomez released the single, "Shower" (2014), as the initial lead single from her debut studio album on April 23. The single proved to be a success for Gomez, entering the top twenty of the Billboard Hot 100 chart in the United States. The song achieved chart success in numerous other countries as well, most notably reaching number eleven in both Australia and Sweden. The single went on to receive a multi platinum certification from the Recording Industry Association of America (RIAA), denoting two million units sold in the country. Gomez began representing CoverGirl in July 2014. As the spokeswoman for the company, she filmed commercials to promote the brand and featured their products in her music videos. "Can't Stop Dancin'" (2014) was serviced as the next single from the album on November 4. The song failed to match the success of her prior single, peaking at number eighty-eight on the Hot 100.

Gomez opened for Katy Perry on select dates of her Prismatic World Tour (2014–15) in the United States. Gomez is featured on the song "Como Tú No Hay Dos" (2015) by Mexican singer Thalía. Gomez released a song titled "Lovin So Hard" (2015), along with a music video consisting of homemade footage of Gomez and Austin Mahone, whom she briefly dated. On June 26, Gomez debuted a song titled "We Are Mexico" in solidarity with the Latin community in response to Donald Trump's remarks against illegal Mexican immigrants. She also performed at a tribute concert for the late Jenni Rivera. She released another song, "Break a Sweat" (2015), the fourth single to be released from her debut album. Gomez embarked on a co-headlining tour with Colombian reggaeton singer J Balvin beginning on September 23 and ending on October 25; the tour spanned across the United States. Gomez also released a remix with J Balvin for her single Can't Stop Dancin. She later collaborated with Yellow Claw on the songs "Wild Mustang" and "For the Thrill" (2015). She released "You Love It" (2015) as a promotional single prior to the release of her debut album. She also appeared as Valentina Galindo in two episodes of Empire adding the singles "Do It" and "New, New" (2015).

Gomez collaborated once more with Pitbull on the song "Superstar" (2016). The song served as the official anthem for the Copa América Centenario. On June 24, Gomez released a new single entitled "Sola" (2016). The song serves as her first to be sung solely in Spanish, and is the lead single to her forthcoming Spanish album. The song achieved success on Spanish radio, reaching number twenty four on the Latin Pop Songs chart in the United States. She is featured in the Lil Jon single "Take It Off" (2016), which also features vocals from Yandel. Gomez is set to star as Trini Kwan, also known as the Yellow Ranger, in the superhero film Power Rangers (2017). On October 7, 2016 Gomez released Mangú her second Spanish song and follow-up to her prior single Sola.

In April 2016, it was confirmed that Gomez was dating professional soccer player Sebastian Lletget.