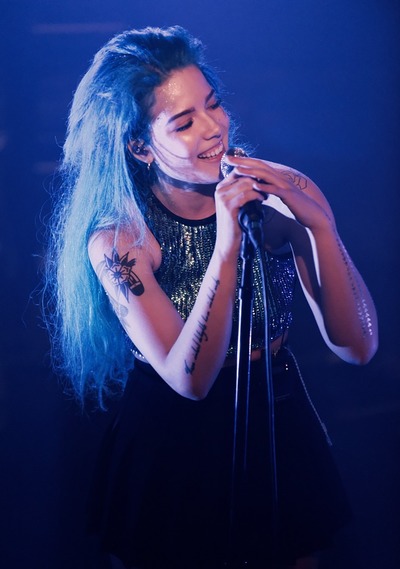 Ashley Nicolette Frangipane (born September 29, 1994), known professionally as Halsey is an American singer, songwriter, and actress. Her stage name is a reference to the Halsey Street station of the New York City Subway in Brooklyn, and an anagram of her first name.

Gaining attention from self-released music on social media platforms, Halsey was signed by Astralwerks in 2014. She toured with acts such as The Kooks and Imagine Dragons to promote her debut extended play, Room 93 (2014). Her debut studio album, Badlands (2015), was certified platinum by the Recording Industry Association of America (RIAA). Four singles were released from the album, all of which achieved minor commercial success.

Halsey rose to prominence with "Closer" (2016), a collaboration with The Chainsmokers, which topped the charts in major music markets. Her second studio album, Hopeless Fountain Kingdom (2017), consisted of more "radio friendly" music than her prior releases. It became her first album to top the US Billboard 200, and generated the single "Bad at Love", which became her first top five entry on the Billboard Hot 100 as a lead artist.

Outside the music industry, Halsey has been involved in social activism, including suicide prevention awareness and sexual assault advocacy.

During 2012, Frangipane began posting videos to social media sites such as Tumblr and YouTube, including a parody of Taylor Swift's song "I Knew You Were Trouble" (2012) inspired by Swift's relationship with Harry Styles. She began using recreational drugs at the age of seventeen, claiming she was an "unconventional child" in part due to her bipolar disorder. Frangipane began living in a basement with a number of her friends, who she described as "degenerate stoners", that she had known through her boyfriend at the time. When describing this period of her life, Halsey stated, "I remember one time I had $9 in my bank account, and bought a four-pack of Red Bull and used it to stay up overnight over the course of two or three days, because it was less dangerous to not sleep than it was to sleep somewhere random and maybe get raped or kidnapped."

Music became her "confessional approach" and a form of therapy. She played numerous acoustic shows in different cities under various stage names. She chose "Halsey" as her moniker because it is an anagram of her real name as well as a street in Brooklyn where she spent a lot of time as a teenager. Frangipane eventually went to live with her grandmother for a period of time. Having written poems for years, she began writing songs as a means of bringing awareness to her poems. She eventually went to a party and met a producer who asked her to collaborate on a song with him. The result, a song about her ex-boyfriend titled "Ghost", was posted by Halsey on SoundCloud several weeks after it was recorded. Within hours, the song gained online popularity, and she was subsequently contacted by several record labels. She ultimately signed with Astralwerks, feeling that they gave her more creative freedom than other labels that contacted her.

While working on her debut studio album, Halsey toured with The Kooks in 2014. During this time, she began an on-again-off-again relationship with Norwegian producer Lido. Halsey released her debut extended play, Room 93 (2014), on October 27. The album charted in the lower regions of the Billboard 200 and at number three on the Top Heatseekers chart. She performed songs from the album at South by Southwest in 2015, where she was the most tweeted about performer of the night. She embarked on a co-headlining tour with Young Rising Songs that March. In June, she became the opening act for Imagine Dragons on their Smoke + Mirrors Tour (2015) during the North American leg. Halsey became pregnant while on tour promoting her upcoming album, though suffered a miscarriage in July 2015. She attributed the miscarriage, which she did not publicly speak about until 2016, to her hectic work schedule.

Her debut studio effort, Badlands (2015), was released on August 28, 2015. Halsey co-wrote all of the songs on the album, while production was handled by a number of producers, including then-boyfriend, Lido. Halsey described the record as a concept album about a dystopian society that was a metaphor for her mental state at the time. At the time, Joe Levy of Rolling Stone citied Halsey as a "new popstar with a knack for sticky imagery." The album debuted at Number Two on the US Billboard 200 chart, selling 97,000 copies in the first week. It was reported in April 2017 that the album had sold over 504,000 copies in the United States, and has been certified platinum by the Recording Industry Association of America (RIAA). The record saw similar success in territories such as the United Kingdom, where it debuted at Number Nine and went on to sell over 100,000 copies. Badlands spawned four commercial singles, which achieved minor chart success worldwide; all four have been certified gold by the RIAA since their release. The project was further promoted by Halsey's Badlands Tour (2015–16) and her spot as the opening act for select dates of The Weeknd's The Madness Fall Tour (2015).

Halsey appeared on the song "The Feeling" alongside Justin Bieber for his fourth studio album, Purpose (2015). The song was not officially released, though entered the top forty of the Billboard Hot 100 and earned certifications in countries such as the United States and the United Kingdom. She was one of four female performers to partner with MAC cosmetics for their Future Forward line; Halsey released a lipstick named after herself. The Senior Vice President and Group Creative Director of the company, James Gager, said "It feels like a great thing to be able to support artists who are breaking through but aren't necessarily at the top top, to push them forward." In May 2016, Halsey released the song "Tokyo Narita (Freestyle)", produced by Lido. The song was a standalone track that served as a promotional single from Halsey. During this time she collaborated with The Chainsmokers on the single "Closer" (2016). The song went on to become one of the most successful singles of the year and became both acts' first song to top the Billboard Hot 100 chart. The single earned a number of awards and accolades, including a nomination at the 59th Annual Grammy Awards for Best Pop Duo/Group Performance. Halsey made a cameo appearance as herself in the seventh episode of the Showtime series Roadies (2016). In 2016, Halsey was diagnosed with endometriosis and went public with it on her Twitter account.

Halsey announced work on her second studio album prior to the release of Badlands (2015), with progress on the record continuing throughout 2016 and 2017. In January, she released the single "Not Afraid Anymore" (2017) for digital download; it appears on the soundtrack of the film Fifty Shades Darker (2017). Her second studio album, titled Hopeless Fountain Kingdom (2017), was released on June 2. The album consisted of more "radio friendly" songs in comparison to her previous album, which she attributed to her desire to prove she was "more than capable" of creating "radio-ready" music. Much like her debut album, Hopeless Fountain Kingdom is a concept album that revolves around a pair of lovers in a tale based on Romeo and Juliet; the project was inspired by her breakup with Lido. The album debuted atop the Billboard 200 chart with first week sales of 106,000 equivalent album units. The album was preceded by the release of the lead single "Now or Never" (2017), which peaked at 17 on the Billboard Hot 100. The second official single 'Bad At Love' received better commercial performance in the US, peaking at 5 on the Billboard Hot 100, her highest peak as a solo artist to date. Two promotional singles were made available prior to the release of the album. To promote the record, Halsey embarked on the Hopeless Fountain Kingdom World Tour, which began on September 29, 2017. Halsey also performed surprise DJ sets at Emo Nite in Los Angeles in 2017. For about a year, she was in a relationship with American rapper and record producer G-Eazy, until they split in July 2018. In mid 2017 she collaborated with the band Thirty Seconds to Mars on the song "Love Is Madness" for their album America.

On February 2, 2018, Halsey released her third single with a video titled "Sorry" for her latest album Hopeless Fountain Kingdom. In April, she appeared on The Doctors and revealed that she had suffered a miscarriage while on tour due to endometriosis, and as a result she had planned to freeze her eggs. In 2018, she also sang with Khalid for Benny Blanco's debut single "Eastside" which came out on July 12, 2018. Also that year, she appeared in two films: she voiced Wonder Woman in Teen Titans Go! To the Movies, and cameoed as herself in A Star Is Born, directed by Bradley Cooper.

On Aug 6, 2018, Halsey was announced to join Jennifer Hudson's team as an advisor for season 15 of The Voice. On September 26, a teaser was uploaded for an upcoming single titled "Without Me", which was released on October 4.

Growing up, Halsey's father listened to The Notorious B.I.G., Slick Rick, Bone Thugs-n-Harmony, and 2Pac, and her mother listened to The Cure, Alanis Morissette, and Nirvana. She said their music taste has been a great influence on her. Halsey called Panic! at the Disco the "band that changed [her] fucking life" and credits Lady Gaga for giving her the strength to be herself. Halsey mentioned Long Island rock band, Brand New, as both an influence and a favorite of hers, once changing her biography on Instagram to "the devil and God are raging inside me", a reference to their third album. Her other influences include Kanye West, The Weeknd, Amy Winehouse, and Bright Eyes.

Cinema also influenced Halsey's development as a singer and songwriter, "There's plenty of musicians that I love and respect, but I think that I'm the most inspired by cinema," such as directors Quentin Tarantino, Harmony Korine, and Larry Clark.

Halsey is an electropop and synth-pop artist.

The New York Times' Jon Caramanica noted, "Halsey arrived as part of a slew of female pop rebels who emerged in the wake of Lorde's early-2010s recalibration of the genre's operating hierarchies."

The biggest influence on her live performances is Adam Lazzara, the frontman of Taking Back Sunday, as she said, "One of the most inspiring things I've ever seen is watching [Taking Back Sunday] live and watching Adam use that microphone as a prop and I thought yep, I'm gonna do that."