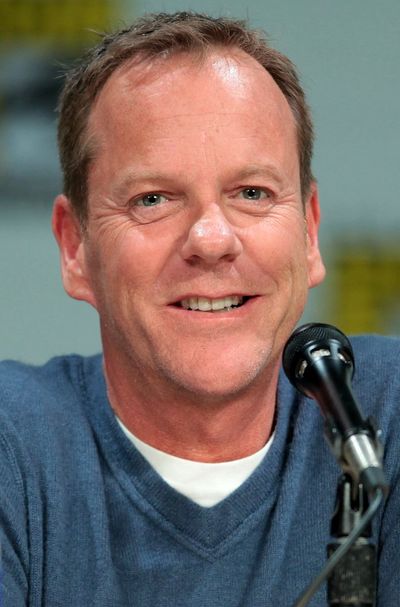 Kiefer William Frederick Dempsey George Rufus Sutherland (born 21 December 1966) is a British-born Canadian actor, film producer, and film director. He is best known for his portrayal of Jack Bauer on the Fox series 24 for which he won an Emmy Award, a Golden Globe Award, two Screen Actors Guild Awards, and two Satellite Awards. He also starred as Martin Bohm in the Fox drama Touch, and will provide the English voice of Punished Snake in the upcoming Metal Gear Solid V: The Phantom Pain.

Sutherland was born in London, the son of Donald Sutherland and Shirley Douglas, both of whom are successful Canadian actors. He is of primarily Scottish descent, with some English and German ancestry. His maternal grandfather was Scottish-born Canadian politician and former Premier of Saskatchewan Tommy Douglas, who is widely credited for bringing universal health care to Canada.

Stand by Me was the first film Sutherland made in the United States. He played the neighbourhood bully in this coming of age story about the search for a dead body. Sutherland has appeared in more than 70 films, most notably Twin Peaks: Fire Walk with Me, A Few Good Men, Flatliners, Young Guns,The Vanishing, The Three Musketeers, Eye for an Eye, Dark City, A Time To Kill, and The Sentinel.

The actor is also a frequent collaborator with director Joel Schumacher, and has appeared in The Lost Boys, Flatliners, Phone Booth and the big screen adaptation of A Time to Kill.

Since 2001, Sutherland has been associated most widely with the role of Jack Bauer, on the critically acclaimed television series 24. After being nominated four times for the "Outstanding Lead Actor in a Drama Series" Primetime Emmy Award, Sutherland won the award in 2006 for his role in 24's fifth season. In the opening skit of the 2006 Primetime Emmy Awards, Sutherland made an appearance as his 24 character, Jack Bauer. He was also nominated for Best actor in a Drama Television Series in the 2007 Golden Globe Awards for 24. According to his 2006 contract, his salary of $40 million for three seasons of the show made him the highest-earning actor on television. Sutherland constantly emphasizes that the show is merely "entertainment." The Dean of the United States Military Academy, Brigadier General Patrick Finnegan, visited the set of 24 in February 2007 to urge the show's makers to reduce the number of torture scenes and Sutherland accepted an invitation from the U.S. military to tell West Point cadets that it is wrong to torture prisoners. In an interview with OK! Magazine, Howard Gordon says that it would be an "unbearable loss" if they killed off Sutherland's character.

Sutherland has a twin sister, Rachel Sutherland, who is a TV post-production supervisor in Toronto.

Sutherland has one daughter, Sarah Jude, born 18 February 1988, from his first marriage to Camelia Kath, the widow of Chicago guitarist/singer Terry Kath, to whom he was married from 12 September 1987 – 1990. Sarah graduated from the Tisch School of the Arts in spring 2012 and made her acting debut on the HBO TV series Veep. Through his marriage to Camelia, he became stepfather to Michelle Kath. His stepdaughter Michelle married in 2004 and has sons Hammish (2005) and Quinn (2010)

Julia Roberts met Sutherland in 1990, when they co-starred in Flatliners. In August 1990, Roberts and Sutherland announced their engagement, with an elaborate studio-planned wedding scheduled for 14 June 1991. Roberts broke the engagement three days before the wedding allegedly because Sutherland had been meeting with a stripper named Amanda Rice. Sutherland denied having an affair with Rice and said that they only met because he liked to play pool. On the day of what was supposed to be their wedding date, Roberts ran off to Ireland with Sutherland's friend Jason Patric.