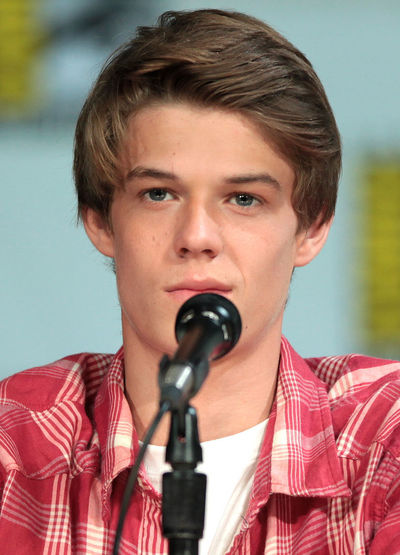 Colin Ford (born September 12, 1996) is an American actor and voice actor. He appeared as Joe McAlister in Under the Dome. He is also known as the voice of Jake on Jake and the Never Land Pirates, which earned him a Young Artist Award, and for his role as Dylan Mee in the family movie We Bought a Zoo.

Ford was born in Nashville, Tennessee. He enjoyed being in front of the camera which led to his start in the entertainment business. At age 4, he modeled for print ads for regional and national retailers. At age 5, he made his film debut as Clinton Jr. in the feature film Sweet Home Alabama. He obtained more roles in independent films such as Moved, The Book of Jaene and Dumb and Dumberer: When Harry Met Lloyd.

In 2004, Ford portrayed Matthew Steed in the movie The Work and the Glory. 2005 began with a high profile photo shoot with Brad Pitt and Angelina Jolie for W magazine. This was immediately followed by a trip to Vancouver with Tom Welling and the cast of Smallville. Following Smallville, he reprised his role as Matthew Steed in The Work and the Glory: American Zion, then played a lead role, as Jackson Patch in Dog Days of Summer, along with veteran actor Will Patton. Capping off a busy year, Ford was back in Vancouver, playing Zeph, the son of Jason Statham's and Claire Forlani's characters in the epic adventure, In the Name of the King: A Dungeon Siege Tale, which was released in April 2007. Ford voiced the role of Dart, the reindeer, performing with Kathy Bates, Andy Griffith, Jay Leno, Ed Asner, Shirley Jones, and many others in the feature film, Christmas Is Here Again.

He starred in the film We Bought a Zoo, which was released in December 2011. He played the young son Dylan of a three-part family, with Matt Damon as the father, Benjamin, along with a little sister Rosie Maggie Elizabeth Jones.

He attended Campbell Hall School, the same school as his We Bought a Zoo costar, Elle Fanning. He now attends Oaks Christian Online High School, a college preparatory school. After filming We Bought a Zoo, Colin was cast on the TV series Under The Dome, playing Joe McAlister.