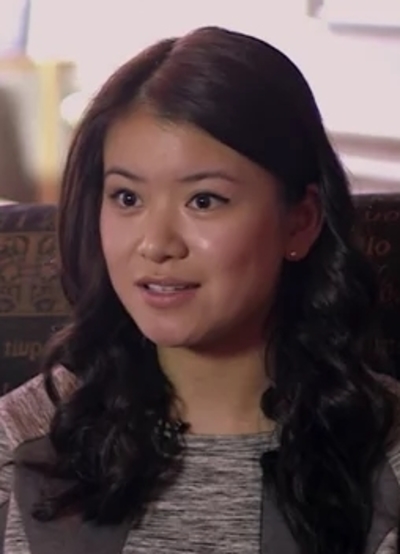 Katie Liu Leung (born 8 August 1987) is a Scottish film, television, and stage actress. She played Cho Chang, the first love interest for lead character Harry Potter in the Harry Potter film series. In 2012, Leung made her stage debut in the play Wild Swans. Leung has an interest in painting and photography and studied art and design at the University of the Arts, London.

Leung was born in Motherwell, North Lanarkshire, to Peter, a businessman, and Kar Wai Li Leung, who works in a law firm. She is of Chinese ancestry. Her parents are divorced. An immigrant from Hong Kong, her father owns a restaurant and a Chinese food wholesale firm. She attended secondary school at Hamilton College, South Lanarkshire.

Leung's father saw an advertisement for a Harry Potter and the Goblet of Fire casting call, and suggested she should try out. She waited four hours in line for a five-minute audition, despite feeling she had little likelihood of obtaining the role, Two weeks later, she was called back for a workshop and was cast as Cho Chang, beating out over 3,000 other girls for the part. In retrospect, she stated in an interview with the Daily Record that her Scottish accent probably gave her an advantage in the casting, as the casting director asked the girls who attended the audition, "Is there anyone here from Scotland?", to which only Leung raised her hand. In a 2011 interview, Leung said her fondest memory of the Harry Potter experience was the first audition, because both her parents, who were separated at the time, went with her. "It was a really nice moment because my parents hadn't seen each other for a long, long time," Leung said. In an effort to heavily promote Harry Potter and the Goblet of Fire, Warner Bros. sent Leung to China in the film's second week of release, which was unusual for a market not used to frequent celebrity visits.

She appeared in Harry Potter and the Order of the Phoenix in which she and Daniel Radcliffe (Harry) shared an on-screen kiss that received much media coverage. Her role was significant in the series at this point as Harry Potter's first romance. While Leung was greeted warmly by most fans of the series, some Potter fans, jealous of Leung's relationship with Harry in the film, created a "I Hate Katie" website and racist messages posted on fan websites were upsetting to Leung at the time.

In July 2007, Leung was cast by Gold Label Records, a subsidiary of EMI in Hong Kong, to be the female lead in the music video Love Coming Home (愛回家) by Leo Ku. Leung filmed the video in London while promoting the new Harry Potter film. Ku described Leung's acting as "professional" and "mature."

Leung played Hsui Tai in the episode "Cat Among the Pigeons" of ITV1's Agatha Christie's Poirot, which premiered on ITV on 21 September 2008.

Leung has been named as Scotland's most stylish female and as the hottest Scotswoman in 2007 by The Scotsman. She has also been featured in Teen Vogue and in Evening Standard.

Following the end of the Harry Potter films, Leung said she was uncertain if she wanted to continue a career in acting. However, after attending a drama course at the Royal Conservatoire of Scotland, she was inspired. In December 2011, she was awarded the role of Jung Chang as her debut stage role in Jung Chang's autobiographical play Wild Swans. In comparing film to live performances, Leung said, "The obvious challenge is of course getting it right the first time, which is weirdly exciting for me." The play made its world premiere in Cambridge, Massachusetts in February 2012, before returning to Motherwell.

In June 2012, it was confirmed that Leung would be starring in Channel 4 four-part drama series called Run as leading character called Nu-Ying. Leung's character Nu-Ying is an illegal Chinese immigrant who sells pirate DVDs and stolen phones on the streets of Brixton in hope of making a life for herself in the UK. But first she must pay her debts to the Snakehead gang who smuggled her into Britain.

She starred in The World of Extreme Happiness (The Shed at the National Theatre, 2013), in which she played Sunny, along with Vera Chok as Xiao Li, a female migrant worker, in a production about the world of migrant workers in rapidly emerging modern China. Leung has also appeared in the BBC's production Father Brown crime drama series.

In April 2014, it was announced that Leung is to play the role of Mei, a first-born Chinese girl adopted by an American mother and British father, in the TV miniseries One Child. In the story, her character is asked to return to her birthplace, Guangzhou, when her birth mother desperately seeks her assistance in saving her son. The series is produced by BBC Drama production for BBC Two and is co-produced with Sundance TV. It was scheduled to begin production in May 2014 in London and Hong Kong and aired in February 2016. Leung received praise by Catherine Gee of The Daily Telegraph, who called her performance "beautifully understated".

In late 2016, Leung appeared in the Tony Kushner play The Intelligent Homosexual's Guide to Capitalism and Socialism with a Key to the Scriptures (iHo) at the Hampstead Theatre, London. In 2017, Leung co-starred with Jackie Chan and Pierce Brosnan in The Foreigner, playing Fan, Chan's character's daughter.

Leung delayed plans to go to art college and university to film Harry Potter and the Order of the Phoenix. During this period, Leung had said she was undecided about pursuing an acting career after Harry Potter and wished to attend university to study art and design. In 2007, she helped The Prince's Trust charity of Scotland raise £100,000 by launching a children's art competition and also donated one of her own paintings which was auctioned for £960. In 2008, she attended University of the Arts London. Leung has expressed a passion for photography. In 2009, she was one of two celebrities who donated a photo to Sightsavers International's I:Click 2009 competition. Sightsavers International is a charitable organisation to combat blindness in poor countries. While appearing in Wild Swans, Leung worked to complete her photography degree. On the completion of the play Leung has said she will attend the Royal Conservatoire of Scotland in Glasgow, where as of 2012, she was studying on the BA Acting course.

She speaks fluent Cantonese and some Mandarin.