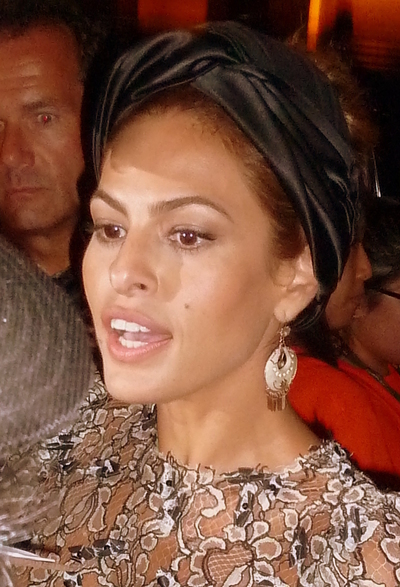 Mendes has worked as a spokesmodel for Cociochocolate milk, Magnum ice cream, Revlon make-up,Calvin Klein underwear and perfume, Cartier jewellery, Thierry Mugler perfume, Reebok trainers, Campari apéritif, Pantene shampoo, Morgan clothes and Peek & Cloppenburg clothes. Mendes is the creator of a home decor line, Vida, sold exclusively at Macy's. She launched a bedding collection in 2008 and a dinnerware collection in 2010. Mendes is a singer: she has recorded a version of The Windmills of Your Mindand has collaborated with Cee Lo Green on a song entitled Pimps Don't Cry. She lives in the Los Feliz neighborhood of Los Angeles.

Mendes was born in Miami, Florida, to Cuban parents, and was raised in the Los Angeles suburb of Glendale, by her mother, after her parents' divorce. Mendes has said that her mother (who was a stay-at-home mom until she became an accountant when Eva went to school) "suffered so much to make my life OK" during Mendes' early years. Her mother worked for an aerospace company and her father ran a meat distribution business. Mendes was raised a Roman Catholic and aspired to be a nun. She attended Hoover High School in Glendale and later attended California State University, Northridge to study marketing, but dropped out after wanting to begin an acting career. She studied acting under Ivana Chubbuck. Before Mendes got her big break, she sold ‘Hot Dog on a Stick’ at Glendale Galleria Mall in California. Growing up, Eva's role model was Cindy Crawford.

While Mendes "always had high hopes" for herself, she didn't consider an acting career until a talent manager saw her photo in a friend's portfolio. Her first film appearance was in the direct-to-video Children of the Corn V: Fields of Terror. Mendes was "so ashamed" by her performance in the film that she decided to hire an acting coach so that she wouldn't "squirm" when watching herself in future roles. In this period of her career, she also starred in A Night at the Roxbury, Mortal Kombat: Conquest, My Brother the Pig, The Disciples, Urban Legends: Final Cut and Exit Wounds.

Mendes' breakthrough role came when she appeared in Training Day as the girlfriend of Denzel Washington's character. She found it to be a fulfilling experience: "I thought, 'This is what people meant about acting." That performance led to roles in All About the Benjamins, 2 Fast 2 Furious, Once Upon a Time in Mexico (which earned her a nomination at the Teen Choice Awards), Out of Time and Stuck on You. She was the female lead in the 2005 comedy Hitch opposite Will Smith. They were the first minority actors to play leads in a hit romantic comedy.

Mendes does not want to have children and has described marriage as "a very archaic kinda thing. I don't think it fits in my world today." She was in a relationship with George Augusto from 2002 to 2010. She began dating Ryan Gosling in September 2011. She lives in Los Feliz, Los Angeles.