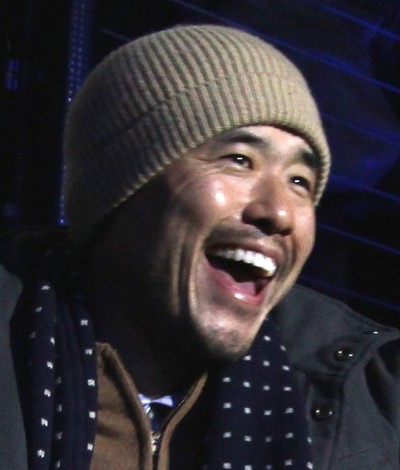 Randall Park (born March 23, 1974) is an American actor, comedian and writer. He is best known for portraying Kim Jong-un in the 2014 film The Interview and Eddie Huang's father, American restaurateur Louis Huang, in Fresh Off the Boat, for which he was nominated for the Critics' Choice Television Award for Best Actor in a Comedy Series in 2016. In 2012, he had gained popularity playing Steve, a prank replacement of Jim Halpert in an episode of The Office. He has since starred in the Marvel Cinematic Universe movie Ant-Man and the Wasp as FBI agent Jimmy Woo and in the DC Extended Universe film Aquaman as Dr. Stephen Shin.

Park was born to Korean immigrant parents in Los Angeles, California. He was raised in West Los Angeles. His mother was an accountant at University of California, Los Angeles (UCLA), and his father owned a one-hour photo store.

Park graduated from Hamilton High School's Humanities Magnet Program. Park earned a bachelor's degree in English and creative writing and a master's degree in Asian American studies from UCLA. While attending UCLA, Park co-founded the largest and longest running University Asian American theater company named "Lapu, the Coyote that Cares", which is now known as the LCC Theatre Company. He was a student volunteer for UCLA's official charity, UCLA UniCamp, going by the camp name: CareMoose.

Park made his acting debut in the 2003 short film Dragon of Love (as the main character, Joel), which won the Best Short Film at the 2003 Hawaii International Film Festival. He has appeared in feature films such as Larry Crowne, Dinner for Schmucks, and The Five-Year Engagement. He appeared in various independent film projects such as Quentin Lee's The People I've Slept With (2009) and starred and co-wrote the feature film American Fusion (2005).

Park has made guest appearances on television shows including Community, Curb Your Enthusiasm, New Girl, The Office, ER, CSI: Crime Scene Investigation, Four Kings, Las Vegas, House, iCarly, Cold Case, The Mindy Project, and Reno 911!. He appeared as Martin Fukanaga on Supah Ninjas and was a cast member on MTV's Wild 'n Out. In 2007, he regularly appeared as an actor in the filmmaking reality show On the Lot.

In 2014, Park played a company rep trying to recruit college students in Neighbors, co-starred in the Jason Segel/Cameron Diaz comedy, Sex Tape, which led to his being cast in The Interview (2014), portraying Kim Jong-un.

Park played the recurring character of Minnesota governor, Danny Chung on the HBO comedy Veep. He appeared as Jeff in the prequel 2015 series for Netflix, Wet Hot American Summer: First Day of Camp. In 2015 he also appeared in Wong Fu Productions' first feature film, Everything Before Us.

Since February 2015, Park has starred as Louis Huang, patriarch of a Chinese American family, alongside Constance Wu, in ABC's television show Fresh Off The Boat (based on Eddie Huang's memoir, Fresh Off the Boat: A Memoir), written and produced by Nahnatchka Khan and executive produced by Jake Kasdan. He was the first actor cast on the show, with the producers having approached him before the pilot was ordered.

In 2015, Park appeared with John Malkovich in the music video for Eminem's single "Phenomenal". He also appeared as a co-worker of Amy Schumer's character in 2015's Trainwreck. In 2015, Park also had roles in the films Southpaw (as Jed Wang) and The Night Before as Ethan's Boss.

In 2016, Park appeared in the film Office Christmas Party as Fred and in 2017 appeared in the comedies The House as the Wall Street Guy and The Disaster Artist. He also lent his voice talents to the CGI animated film The Lego Ninjago Movie as Chen the Cheerleader.

In 2018, Park played the role of FBI Agent Jimmy Woo in the Marvel Studios film Ant-Man and the Wasp. He also appeared in the DC Extended Universe, as Dr. Stephen Shin in the film Aquaman.

Park will star with Ali Wong in Always Be My Maybe, a film directed by Nahnatchka Khan, and written by Park, Wong and Michael Golamco. The film is slated for 2019.

In 2005 Park co-wrote and starred in the feature film American Fusion directed by Frank Lin, which won the Audience Award at the Hawaii International Film Festival. He has also created, directed, written, and starred in several short internet series for Channel 101, including Dr. Miracles, The Food, and Dumb Professor.

In 2013 he wrote and starred in a series for Channel 101 featuring his baby daughter entitled Baby Mentalist. In Channel 101's bracket competition format for webseries, Baby Mentalist was voted number one the most times of any show at the time, ending with six episodes in 2013.

Park wrote a short film, Blueberry, which won an award for Best Actor at the NBC Shortcuts Film Festival For Short Films. He was awarded the Coalition of Asian Pacifics in Entertainment (CAPE) New Writers Award for his television pilot script, The Erasists.

Park also co-wrote a feature film with Ali Wong and Michael Golamco entitled Always Be My Maybe, which is directed by Nahnatchka Khan and will be released in 2019.

Park has been featured in ads for HBO Go, Ally Financial, and the 2011 Father's Day Verizon Droid commercial. He plays a "doggie daycare owner" in a print and online campaign for Chase Bank, which aired in early 2015.

Park was featured in Wong Fu Productions' short film, Too Fast as Brandon, the web series Home Is Where the Hans Are as the stepfather and as Randall in their first feature film, Everything Before Us (2015).

Park was featured in UTC Business Ethics Course HUR750 "Respect in the Workplace".

Park is married to Jae Suh Park and they have one daughter. They live in the San Fernando Valley.