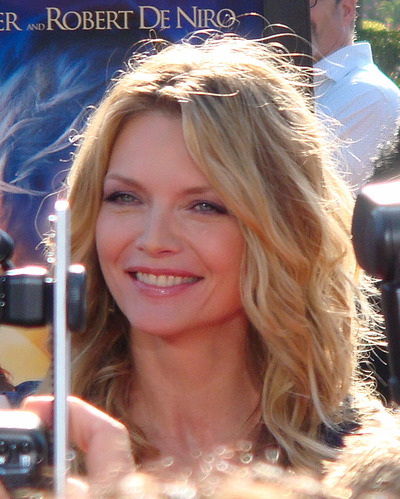 Michelle Marie Pfeiffer (born April 29, 1958) is an American actress and singer. She made her film debut in 1980 in The Hollywood Knights, but first garnered mainstream attention with her breakout performance in Scarface (1983). Pfeiffer has had her greatest commercial successes with Batman Returns (1992), What Lies Beneath (2000), and Hairspray (2007).

Pfeiffer was born in Santa Ana, California, the second of four children of Richard Pfeiffer, a heating and air-conditioning contractor, and Donna (née Taverna), a housewife. She has one elder brother, Rick (born 1955), and two younger sisters, Dedee Pfeiffer, a television and film actress, and Lori Pfeiffer (born 1965). Her parents were both originally from North Dakota. Her father was of German, Dutch, and Irish descent, and her mother was of Swiss and Swedish ancestry. The family moved to Midway City, where Pfeiffer spent her childhood. She attended Fountain Valley High School, graduating in 1975. She worked as a check-out girl at Vons supermarket, and attended Golden West College. After a short stint training to be a court stenographer, she decided upon an acting career. She won the Miss Orange County beauty pageant in 1978, and participated in Miss California the same year, finishing in sixth position. Following her participation in these pageants, she acquired an acting agent and began to audition for television and films.

Pfeiffer's early acting appearances included television roles in Fantasy Island, Delta House and BAD Cats, and small film roles in Falling in Love Again (1980) with Susannah York, The Hollywood Knights (1980) opposite Tony Danza, and Charlie Chan and the Curse of the Dragon Queen (1981), none of which met with much critical or box office success. Pfeiffer later said of her early screen work: "I needed to learn how to act... in the meantime, I was playing bimbos and cashing in on my looks."

Her first major film role as Stephanie Zinone in Grease 2 (1982), the sequel to the smash-hit musical Grease (1978). The film was a critical and commercial failure, although Pfeiffer herself received some positive attention, notably from the New York Times, which said "although she is a relative screen newcomer, Miss Pfeiffer manages to look much more insouciant and comfortable than anyone else in the cast." Despite escaping the critical mauling, Pfeiffer's agent later admitted that her association with the film meant that "she couldn't get any jobs. Nobody wanted to hire her."

Director Brian De Palma, having seen Grease 2, refused to audition Pfeiffer for Scarface (1983), but relented upon the producer's insistence. She was cast as cocaine-addicted trophy wife Elvira Hancock. The film was considered excessively violent by most critics, but became a commercial hit and gained a large cult following in subsequent years. Pfeiffer received positive reviews for her supporting turn; Richard Corliss of Time Magazine wrote, "most of the large cast is fine: Michelle Pfeiffer is better..." while Dominick Dunne, in an article for Vanity Fair titled "Blonde Ambition", wrote, "[s]he is on the verge of stardom. In the parlance of the industry, she is hot."

She finally scored a major box-office hit as Sukie Ridgemont in the 1987 adaptation of John Updike's novel The Witches of Eastwick, alongside Jack Nicholson, Cher and Susan Sarandon. The film grossed $63,766,510 domestically (equivalent to $128.9 million in 2013 dollars).

While taking acting classes in Los Angeles, Pfeiffer was taken in by a friendly couple who ran a metaphysics and vegetarian cult. While they helped Pfeiffer to no longer drink, smoke, or do drugs, the couple took control of her entire life. Much of her money went to the group. "I was brainwashed... I gave them an enormous amount of money." Pfeiffer, insecure, felt that she could no longer live without them. At an acting class taught by Milton Katselas in Los Angeles, Pfeiffer met fellow budding actor, Peter Horton. Pfeiffer and Horton began dating. The actor took notice of the young actress' plight, and decided to try to help her. Horton was cast in a film called Split Image. His character in the film is enrolled in Peter Fonda's cult. He is then de-programmed by James Woods. While doing research in San Francisco for the role, Horton took Pfeiffer along to meet real-life cult de-programmers. It was due to this experience that Pfeiffer finally felt strong enough to leave the couple.

Pfeiffer and Horton eventually married in Santa Monica in 1981, and it was on their honeymoon that she discovered she had won the lead role in Grease 2. Horton directed Pfeiffer in a 1985 ABC TV special, One Too Many, in which she played the high school girlfriend of an alcoholic student (Val Kilmer); and in 1987, the real-life couple played an on-screen couple in the 'Hospital' segment of John Landis's comedy skit compilation, Amazon Women on the Moon. However, they decided to separate in 1988, and were divorced two years later; Horton later blamed the split on their devotion to their work rather than their marriage.

After her marriage to Horton, Pfeiffer had a three-year relationship with actor/producer Fisher Stevens. They met when Pfeiffer was starring in the New York Shakespeare Festival production of Twelfth Night, in which Stevens played the part of Sir Andrew Aguecheek.

In January 1993, Pfeiffer was set up on a blind date with television writer and producer David E. Kelley, who took her to the movies to see Bram Stoker's Dracula the following week, and they began dating seriously. They married on November 13, 1993. Since then, she has made an uncredited cameo appearance in one episode of Kelley's television series Picket Fences and played the title character in To Gillian On Her 37th Birthday, for which Kelley wrote the screenplay. Pfeiffer had entered into private adoption proceedings before she met Kelley. In March 1993, she adopted a newborn daughter, Claudia Rose, who was christened on Pfeiffer and Kelley's wedding day. In August 1994, Pfeiffer gave birth to a son, John Henry.