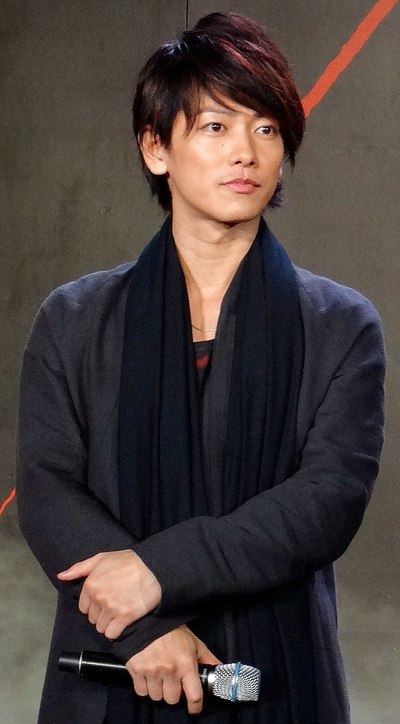 Takeru Satoh (佐藤 健 Satō Takeru, born 21 March 1989) is a Japanese actor. He is best known for his leading role as Ryotaro Nogami in the Kamen Rider Den-O franchise, and as Himura Kenshin in the live-action Rurouni Kenshin film and its sequels.

Satoh was born on 21 March 1989 in Iwatsuki-ku, Saitama. He has a younger sister; his parents divorced when he was in middle school. He graduated from Koshigayakita High School, Saitama in 2007. He celebrated his 20th birthday (a significant Coming of Age Day for Japanese youths) with a festival in Odaiba in Tokyo, called "Takeru Festival 2009".

Satoh was scouted by an agent from Amuse, Inc. in Harajuku in Tokyo when he was in senior high school, and made his debut in 2006. His first drama was Princess Princess D (TV Asahi) where he played the role of Toru Kouno. In 2007, he guest-starred in Shinigami no Ballad (Kentarō Ishihara) and gained popularity in the seventeenth installment of the Kamen Rider series as Ryotaro Nogami. Satoh attributes the popularity of Den-O to its comedic timing.

Following the success and popularity of Kamen Rider Den-O and a further two films, in spring 2008, Satoh starred in the award-winning TBS drama Rookies as Yuya Okada. Okada belongs to a group of delinquents in a baseball club who are suspended from playing due to a previous violent match. Under their new teacher's guidance, the wayward club members rediscover their dream of going to the Koshien high school baseball tournament. Satoh considers his role in Rookies to be his breakout role even though he only played a minor supporting role. This was due to the fact that Rookies reached a much larger audience than any of his previous works as the drama was shown on prime time television. Satoh also featured in the special episode of Rookies and starred in the live-action in the summer of 2009.

Satoh reprised his role as Ryotaro (Den-O) in the third film of Kamen Rider Den-O in October 2008. This was Satoh's last time playing Ryotaro. During the same month, he starred in the drama Bloody Monday, based on the manga with the same name. He played Otoya Kujo, the best friend of main protagonist Fujimaru Takagi, who is played by fellow Amuse member and real life good friend Haruma Miura.

In early 2009, Satoh starred in Mei-chan no Shitsuji as Kento Shibata. His character decides to enroll in a butler school so that he can stay close to childhood friend Mei Shinonome, who attends St. Lucia Girls' Academy, where all the students have butlers. His role in this drama is a firm favorite with fans. He starred in the film Goemon in summer 2009, and also guest-starred on TV shows, Mr. Brain, True Horror Stories and MW Dai-0-sho. In 2010, he played Okada Izō in his first Taiga drama Ryōmaden and had a major supporting role in the film Beck co-starring Hiro Mizushima and Osamu Mukai, both of them being his co-stars from Mei-chan no Shitsuji. Following the release of the film, Satoh landed his first leading role on prime time television with teen drama Q10.

On 28 June 2011, he was confirmed to star as Himura Kenshin in a live action film adaptation of the manga series Rurouni Kenshin.

Released in August 2012, the film grossed a total of 3.01 billion yen at the domestic box office. Satoh made his stage debut as Romeo with the Japanese adaptation of Shakespearean classic Romeo and Juliet in May 2012.

His subsequent project Tonbi was a drama series based on a novel by Shigematsu Kiyoshi. He then starred in Real, a science fiction mystery movie directed by Kiyoshi Kurosawa, as well as The Liar and His Lover, a live-adaptation film based on the manga Kanojo wa Uso o Aishisugiteru.

In 2014, Satoh played the role of a rookie detective in Fuji TV's Bitter Blood. He reprised the role of Himura Kenshin in two sequel films of the Rurouni Kenshin live action franchise, Kyoto Inferno and The Legend Ends, both of which were released in 2014. Satoh got recogniziton by Rurouni Kenshin manga author Nobuhiro Watsuki who, alongside his wife, found Satoh as an ideal actor him.He, alongside Rurouni Kenshin co-stars Emi Takei, Munetaka Aoki, and director Keishi Otomo was appointed as "Cultural Friendship Ambassador" to the Philippines by the Makati City council on 7 August 2014.

Riding upon his movie success, he made his TV return with the acclaimed TBS series The Emperor's Cook in early 2015. He followed up with 3 Toho Corporation films in 2015 and 2016 including the manga live adaptation Bakuman and light novel adaptation If Cats Disappeared from the World, as well as Somebody.