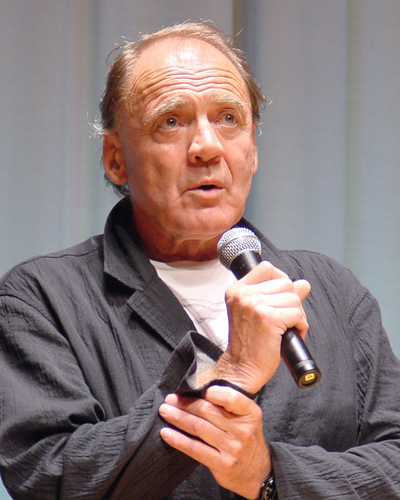 Bruno Ganz (born 22 March 1941) is a Swiss actor, known for his roles as Damiel in Wings of Desire, as Adolf Hitler in Downfall and as Professor Rohl in The Reader.

Bruno Ganz was born in Zürich to a Swiss mechanic father and a northern Italian mother. He had decided to pursue an acting career by the time he entered university. He was equally drawn to stage and screen but initially enjoyed greater success in the theater.

In 1960, Ganz landed his first film role, in Der Herr mit der schwarzen Melone (The Gentleman in the Black Derby). Despite the support of lead actor Gustav Knuth, his cinematic debut was not particularly successful and it was only many years later that his career in film got off the ground. Ganz made his theatrical debut the following year and devoted himself primarily to the stage for almost two decades thereafter. In 1970, he helped found the Berliner Schaubühne ensemble and two years later performed in the Salzburg Festival premier of Thomas Bernhard's Der Ignorant und der Wahnsinnige, under the direction of Claus Peymann. The German magazine Theater heute (Theater Today) solidified Ganz’s reputation as a stage actor by pronouncing him Schauspieler des Jahres(Actor of the Year) in 1973. One of Ganz's most physically demanding stage portrayals was the title character in Peter Stein’s 2000 production of Goethe's Faust (Parts I and II), as he suffered injuries during rehearsals and his assumption of the role was delayed.

Ganz made his film breakthrough in a major part in the 1976 film Sommergäste, launching a widely recognized film career in both Europe and the U.S. He has worked with directors Werner Herzog,Wim Wenders, Éric Rohmer, and Francis Ford Coppola, among others. In 1979 he starred opposite Klaus Kinski in Herzog’s Nosferatu: Phantom der Nacht (Nosferatu: Phantom of the Night).

Bruno Ganz is separated from his wife Sabine, whom he married in 1965, and with whom he had his only son Daniel (born 1972). When not in his hometown of Zürich, he resides in Venice and Berlin.