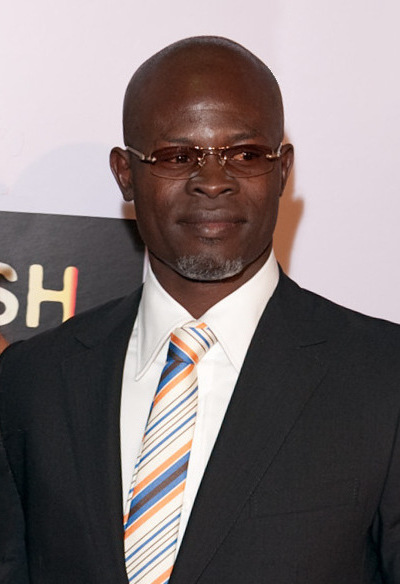 Djimon Gaston Hounsou (born April 24, 1964) is a Beninese-born American actor and model. As an actor, Hounsou has been nominated for two Academy Awards.

Djimon Hounsou was born in Cotonou,Bénin, in 1964, to Albertine and Pierre Hounsou, a cook. He emigrated to Lyonin France at the age of thirteen with his brother, Edmond. Soon after arriving in France, Hounsou dropped out of school and became homeless for a time. A chance meeting with a photographer led to Hounsou being introduced to fashion designer Thierry Mugler, who encouraged Hounsou to pursue a modeling career. In 1987, Hounsou became a model and established a career in Paris. He moved to the United States in 1990.

In 1989 and 1991, Hounsou appeared in the music videos for "Straight Up" by Paula Abdul and "Love Will Never Do (Without You)" by Janet Jackson,  as well as Madonna's Express Yourself.

Hounsou's film debut was in the 1990 Sandra Bernhard film Without You I'm Nothing. He had television parts on Beverly Hills, 90210 and ER and a guest starring role on Alias. Hounsou received a larger role in the science fiction film Stargate.

Hounsou received wide critical acclaim and a Golden Globe Award nomination for his role as Cinqué in the 1997 Steven Spielberg film Amistad. He gained further notice as Juba in the 2000 film Gladiator. In 2004, Hounsou was nominated for the Academy Award for Best Supporting Actor for In America, making him the fourth African male to be nominated for an Oscar. That same year, Charlize Theron, a South African actress, was nominated for Best Actress and won for her work in Monster, and was the first time that one African man and one African woman were nominated for an Oscar in the same year. In 2006, he won the National Board of Review Award for Best Supporting Actor for his performance in Blood Diamond; he received Broadcast Film Critics Association, Screen Actors Guild Award, and Academy Award nominations for this performance.

Hounsou became a naturalized U.S. citizen in 2005, and currently resides in Los Angeles. He was reluctant to renounce his Beninoise citizenship and therefore opted to become a dual citizen of both Benin and the United States.

In 2007, Hounsou began dating model Kimora Lee Simmons. On May 30, 2009, Simmons gave birth to their son, Kenzo Lee Hounsou, reportedly named because "Kenzo" means "three" (Kimora's third child). Hounsou and Simmons visited Hounsou's family in his native Benin in the summer of 2008, where the two participated in a traditional commitment ceremony. The couple were adorned in traditional clothing and used the ceremony, in the presence of Hounsou's family, to solidify that they are "dedicated to each other 100%." The two, however, emphasized that the ceremony was not a wedding. In the début of Kimora Lee Simmons' show, "Life in the Fab Lane", he was billed as her husband. Hounsou and Simmons, who were never legally married in the United States, announced their separation in November 2012.