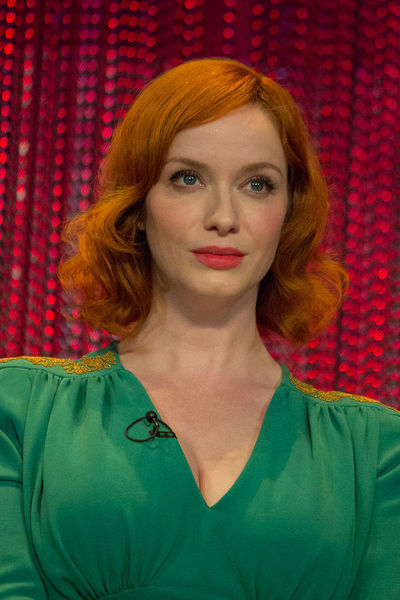 Christina Rene Hendricks (born May 3, 1975) is an American actress. She is best known for her role as Joan Holloway in the AMC drama television series Mad Men, for which she was nominated for six Emmy Awards.

Hendricks' film credits include Drive, God's Pocket and Lost River. She currently appears as Celine/"Chair" in the Comedy Central sitcom Another Period, and as Trudy in the SundanceTV drama series Hap and Leonard.

Hendricks was born in Knoxville, Tennessee. Her mother, Jackie Sue (née Raymond), was a psychologist. Her father, Robert Hendricks, worked for the United States Forest Service and was from Birmingham, England. Through her father, she has dual US & UK nationality. Her family moved several times because of her father's profession, and Hendricks spent her early life in Portland, Oregon, and Twin Falls, Idaho.

When Hendricks was a teenager, the family relocated to Fairfax, Virginia, where she attended Fairfax High School. According to Hendricks, she was bullied in high school and described herself as an "outcast" and a "goth." After entering a competition to appear on the cover of Seventeen magazine, she signed with a modeling agency at age 18, and moved to New York City.

Hendricks began acting in children's musical theater productions in Twin Falls. She was a model from the ages of 18 to 27. She made her television début in the MTV anthology series Undressed. Her first starring role was in Beggars and Choosers. Since then, she has starred in the series The Big Time and The Court, opposite Sally Field and Craig Bierko, as well as the legal drama Kevin Hill, which was filmed in Fort Cobb, Oklahoma. She has also had recurring roles in ER and Firefly and guest-starred in episodes of Angel, Miss Match, Tru Calling, Presidio Med, Without a Trace, and Las Vegas. Hendricks starred opposite Kip Pardue in South of Pico. La Cucina, an award-winning indie film, premiered on Showtime in December 2009 and stars Hendricks as a writer opposite Joaquim de Almeida. She appeared in four episodes of the NBC series Life in the recurring role of Olivia, detective Charlie Crews' soon-to-be stepmother and Ted Earley's love interest. She also starred in music videos for "The Ghost Inside" by Broken Bells, and Everclear's "One Hit Wonder".

She played Joan Harris on the AMC series Mad Men as the office manager of advertising agency Sterling Cooper & Partners, providing mentoring to a group of women who must deal with the come-ons and callousness of professional advertising executives. Her performance has received critical praise, resulting in six Primetime Emmy nominations for Outstanding Supporting Actress in a Drama Series.

She appeared in the action-thriller Drive, directed by Nicolas Winding Refn, alongside Carey Mulligan and Ryan Gosling. In 2014, she played the lead character in Gosling's directorial debut Lost River, and in 2015, co-starred with Charlize Theron and Chloë Grace Moretz in the novel adaptation Dark Places. In 2015, she was cast as one of the leads in Refn's thriller film The Neon Demon.

Hendricks has been credited as having an ideal shape for a woman. British Equalities Minister Lynne Featherstone praised Hendricks' hourglass figure as an ideal shape for women, saying "Christina Hendricks is absolutely fabulous... We need more of these role models. There is such a sensation when there is a curvy role model. It shouldn't be so unusual." Los Angeles Times television critic Mary McNamara says her portrayal of Joan has revolutionized perceptions of beauty on television. She has been called the "new modern ideal of Hollywood glamour—full figured, voluptuous; a throwback to the days of Marilyn Monroe, Jane Russell and Veronica Lake." British designer Vivienne Westwood selected her to represent its "Get A Life" Palladium jewelry collection in March 2011. Westwood described Hendricks as "the embodiment of beauty." A study by the British Association of Aesthetic Plastic Surgeons attributed a 10% rise in 2010 of the number of British women receiving breast augmentation surgery in part to Hendricks' influence.

Hendricks has moved away from accepting the term "full-figured" and once lambasted a reporter who used the term while interviewing her. Hendricks commented in September 2010 that the media is too focused on women's bodies and not their actual talents, "I was working my butt off on the show [Mad Men] and then all anyone was talking about was my body."

Hendricks is a natural blonde and began coloring her hair red at age 10, inspired by the book Anne of Green Gables. She plays the accordion like her character Joan in Mad Men.

On October 11, 2009, Hendricks married actor Geoffrey Arend. She has said in interviews that she and her husband do not plan to have children.