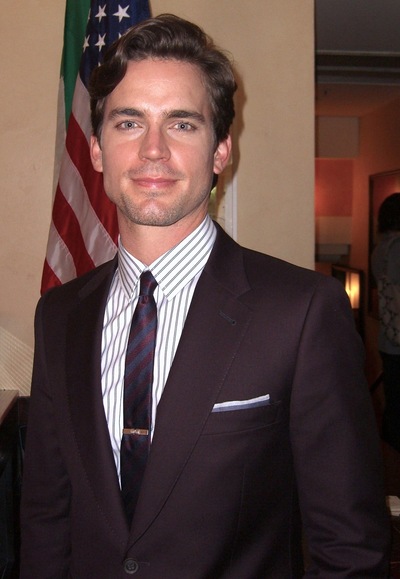 Matthew Staton "Matt" Bomer (born October 11, 1977) is an American actor. He made his television debut with Guiding Light in 2001, and gained recognition with his recurring role in the NBC television series Chuck as Bryce Larkin. He played the lead role of a con-artist in the USA Network series White Collar from 2009 to 2014. Bomer won a Golden Globe Award and received a Primetime Emmy Award nomination for his supporting role as Felix Turner in the HBO television film The Normal Heart (2014).

Bomer has also featured in supporting roles in such films as the 2005 thriller Flightplan, the 2011 science fiction thriller In Time, the 2012 comedy-drama Magic Mike and the 2014 supernatural-drama Winter's Tale. He starred in the Dustin Lance Black play 8 on Broadway and at the Wilshire Ebell Theatre as Jeff Zarrillo, a plaintiff in the federal case that overturned California's Proposition 8. Bomer is married to the publicist Simon Halls with whom he has three children.

Bomer was born in Webster Groves, Greater St. Louis, Missouri, one of three children born to John Bomer, a former Dallas Cowboys draft pick, and his wife, Sissi (née Staton). He grew up in Spring, Texas, a suburb of Houston. Bomer attended Klein High School in Spring, Texas, with fellow future actor Lee Pace. Pace and Bomer both acted at Houston's Alley Theatre, a non-profit theatre company. In 2001, he graduated from Carnegie Mellon University in Pittsburgh, Pennsylvania with a Bachelor of Fine Arts degree.

After graduating, Bomer moved to New York City, where he won the role of "Ian Kipling" on All My Children. From 2001 to 2003, he portrayed the role of Ben Reade on another daytime television soap opera, Guiding Light. He starred as Luc, Tru's (Eliza Dushku) ill-fated love interest, in Tru Calling (2003–04), a supernatural, science-fiction television series on the Fox television network. Bomer appeared on North Shore (2004–05), a primetime television soap opera, as well as in Flightplan (2005), a thriller film with Jodie Foster. In the slasher film The Texas Chainsaw Massacre: The Beginning (2006), Bomer portrayed Eric, a Vietnam War veteran who is driving across Texas to re-enlist after his brother is drafted. The brothers run afoul of Sheriff Hoyt and are taken captive by the Hewitt family. He co-starred in Traveler (2007), a short-lived midseason replacement television series which premiered on ABC on May 30, 2007. He had a recurring role, as Bryce Larkin, on Chuck. On October 23, 2009, Bomer began starring in White Collar, which chronicles the partnership between a con artist, Neal Caffrey (Bomer) and an FBI agent, Peter Burke (played by Tim DeKay). BuddyTV ranked him first on its list of "TV's Sexiest Men of 2011" and third in 2012.

In September 2011, Bomer starred in the Broadway debut of Dustin Lance Black's play, 8, a staged re-enactment of the federal trial that overturned California's Proposition 8. In March 2012, he was featured in the Wilshire Ebell Theatre production as well, portraying Jeff Zarrillo, one of the plaintiffs in the trial. In October 2011, Bomer appeared in the science fiction thriller film In Time, in which he played a 105-year-old man, Henry Hamilton. In 2012, Bomer starred as Ken, a male stripper, in the feature film Magic Mike. In 2014, he appeared in science-fiction black comedy film Space Station 76, directed by Jack Plotnick. He had a supporting role in the 2014 adaptation of Winter's Tale, directed by Akiva Goldsman.

In June 2013, Bomer was ranked at no. 2 on Logo‍ '​s Hot 100 list, which is based on the votes of readers of the AfterEllen.com and TheBacklot.com. Bomer was the list's highest ranked man, behind only Jennifer Lawrence. In August 2013, it was announced that Bomer will provide his voice in the animated feature B.O.O.: Bureau of Otherworldly Operations for release in June 2015. In September 2013, it was announced that Bomer will play Montgomery Clift in a biopic about the Hollywood star.

Bomer has been married to publicist Simon Halls since 2011. The couple have three sons, including a set of twins, via surrogacy. He first publicly acknowledged that he was gay in 2012, when he thanked Halls and their children during an acceptance speech for his Steve Chase Humanitarian Award. Also in 2012, Bomer was given an Inspiration Award for his work at the GLSEN Awards.

Bomer, a practitioner of Transcendental Meditation since his early 20s, in 2013 stated his support for the work of the David Lynch Foundation.