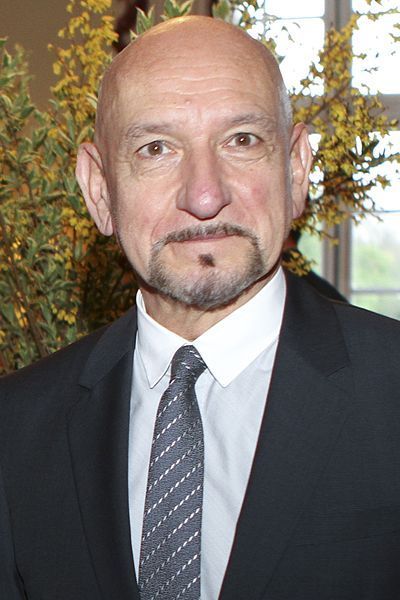 Sir Ben Kingsley, CBE (born Krishna Pandit Bhanji; 31 December 1943) is an English actor. In a career spanning over 40 years, he has won an Oscar, Grammy, BAFTA, two Golden Globes and Screen Actors Guild awards. He is known for his starring role as Mohandas Gandhi in the 1982 film Gandhi, for which he won the Academy Award for Best Actor. He is also known for his performances in the films Schindler's List (1993), Sexy Beast (2000), Lucky Number Slevin (2006), Shutter Island (2010), Prince of Persia: The Sands of Time (2010), Hugo(2011), and Iron Man 3 (2013). In 2013 he received the British Academy of Film and Television Arts Los Angeles 'Albert R. Broccoli Britannia Award for Worldwide Contribution to Filmed Entertainment'.

Kingsley was named a Commander of the Order of the British Empire (CBE) in 2000, and was knighted by Queen Elizabeth II in 2002. In 2010, Kingsley was awarded a star on the Hollywood Walk of Fame.

Kingsley was born Krishna Pandit Bhanji in Snainton, North Riding of Yorkshire, near Scarborough. He is the son of Anna Lyna Mary (née Goodman), an actress and model who appeared in films in the 1920s and 1930s, and Rahimtulla Harji Bhanji, a medical doctor.

Kingsley's father, born in Kenya, was of Gujarati Indian Ismaili Muslim Khoja descent. Kingsley's paternal grandfather was a spice trader who had moved from India to Zanzibar, where Kingsley's father lived until moving to Britain at the age of 14. Kingsley's mother was British; she was born out of wedlock, and "was loath to speak of her background". Kingsley's maternal grandfather was believed by the family to have been a Russian or German Jew, while Kingsley's maternal grandmother was English, and worked in the garment district of East London. Kingsley has stated; "I'm not Jewish... and though there might be some Russian-Jewish heritage way back on my mother's side, the thread is so fine there's no real evidence".

Kingsley grew up in Pendlebury, near Manchester. He was educated at Manchester Grammar School, where one of his classmates was the actor Robert Powell.

Kingsley studied at the University of Salford and at Pendleton College, which later became home to the Ben Kingsley Theatre.

Whilst at college he became involved in amateur dramatics in Manchester, making his professional stage debut on graduation, aged 23. In 1967 he made his London West End theatre debut at the Aldwych Theatre. Later spotted by music producer and manager Dick James, he offered to mould Kingsley into a pop star, but Kinglsey chose to join the Royal Shakespeare Company after an audition in front of Trevor Nunn.

Devoting himself almost exclusively to stage work for the next 15 years, he made his Broadway debut in 1971 with the RSC. Kingsley played Mosca in Peter Hall's 1977 production of Ben Jonson's Volpone for the Royal National Theatre, and in Peter Brook's acclaimed production of A Midsummer Night's Dream. At about this time, he changed his name from Krishna Pandit Bhanji to Ben Kingsley, fearing that a foreign name would hamper his career; he took his stage surname from his paternal grandfather's nickname, "King Clove". He also starred in the role of Willy Loman in a 1982 production of Death of a Salesman in Sydney, Australia opposite Mel Gibson.

Kingsley made the transition to film roles early on, with his first role coming in Fear Is the Key, released in 1972. Kingsley continued starring in bit roles in both film and television, including a role as Ron Jenkins on the soap opera Coronation Street from 1966 to 1967 and regular appearances as a defence counsel in the long-running British legal programme Crown Court. In 1975, he starred as Dante Gabriel Rossetti in the BBCs historical drama The Love School. He found fame only years later, starring as Mohandas Gandhi in the Academy Award-winning film Gandhi in 1982, his best-known role to date. The film was a critical and financial success, and Kingsley won the Academy Award for Best Actor for his performance.

Kingsley has been married four times and has four children: Thomas Bhanji and artist Jasmin Bhanji, with actress Angela Morant, and Edmund Kingsley and Ferdinand Kingsley, both of whom became actors, with theatrical director Alison Sutcliffe. In 2005, he divorced German-born Alexandra Christmann, having been "deeply, deeply shocked" after pictures of her kissing another man surfaced on the Internet. On 3 September 2007, Kingsley married Daniela Lavender, a Brazilian actress, at Eynsham Hall, in North Leigh, Oxfordshire.