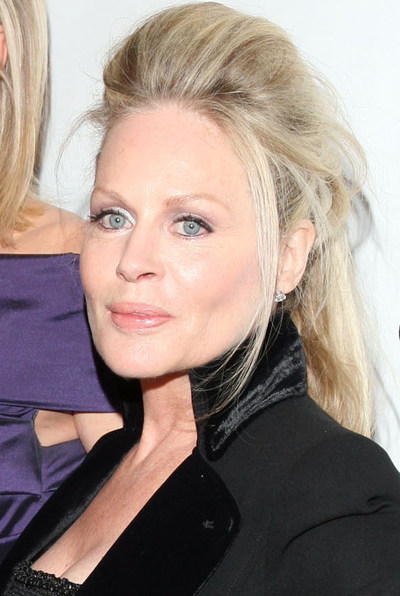 Beverly Heather D'Angelo (born November 15, 1951) is an American actress and singer, best known for her role as Ellen Griswold in the National Lampoon's Vacation franchise. D'Angelo received critical acclaim for her performances as Patsy Cline in Coal Miner's Daughter (1980), and as Doris Vinyard in American History X (1998). She has also performed in Broadway theatre, starred in a number of television films, and had roles in over 50 movies.

D'Angelo was born in Columbus, Ohio, the daughter of Priscilla Ruth (née Smith), a violinist, and Eugene Constantino "Gene" D'Angelo, a bass player and television station manager. Her father was of Italian descent. Her maternal grandfather, Howard Dwight Smith, was the architect who designed Ohio Stadium, also known as "the Horseshoe" at Ohio State University. She worked as an illustrator at Hanna-Barbera Studios and as a singer before pursuing an interest in acting. She has three brothers, Jeff, Tim and Tony.

D'Angelo began acting in the theatre, appearing on Broadway in 1976 in Rockabye Hamlet (also known as Kronborg: 1582), a musical based on Shakespeare's Hamlet. She made her television debut in the first three episodes of the TV mini-series Captains and the Kings in 1976, and later began her film career.

After gaining a minor role in Annie Hall in 1977, D'Angelo appeared in a string of hit movies in the late 1970s including Every Which Way But Loose, Hair, and Coal Miner's Daughter, the latter earning her a Golden Globe nomination for Best Supporting Actress for her performance as Patsy Cline and a Country Music Association award for Album of the Year. Her biggest break came in 1983 starring with Chevy Chase in National Lampoon's Vacation in the role of Ellen Griswold. She reprised this role in four Vacation sequels and a short film between 1985 and 2015. In the 1980s she starred in many other major comedy films, and as of the mid-90's acted primarily in independent movies. In 1994 D'Angelo returned to the stage and won a Theatre World Award for her performance in the Off-Broadway play Simpatico.

D'Angelo received an Emmy Award nomination for her performance in the 1984 TV movie version of A Streetcar Named Desire. She later had main roles in a number of made for television dramatic films including Slow Burn, Judgment Day: The John List Story, and Sweet Temptation. In the 2000s D'Angelo had a recurring role on Law & Order: Special Victims Unit as defense attorney Rebecca Balthus. She also worked as a voice actress. In 1992 she had a guest appearance in the third season of The Simpsons as Lurleen Lumpkin, a beautiful Southern country singer and waitress in the "Colonel Homer" episode, and sixteen years later in 2008, she appeared in the nineteenth season as the same character in the episode "Papa Don't Leech". From 2005 to 2011 she appeared in the HBO series Entourage playing the role of agent Barbara "Babs" Miller. In 2006 she starred in the independent film Gamers: The Movie. In 2008 D'Angelo had a role in the film Harold & Kumar Escape from Guantanamo Bay as Sally. She played the housemother in the film The House Bunny, and also appeared in the Tony Kaye film Black Water Transit.

In 1981, D'Angelo married Italian Don Lorenzo Salviati, the only son and heir of Don Forese Salviati, 5th Duke Salviati, Marchese di Montieri and Boccheggiano, Nobile Romano Coscritto, and his wife, the former Maria Grazia Gawronska. Later, she began a relationship with Anton Furst, an Academy award-winning production designer, who committed suicide in 1991. D'Angelo was in a relationship with actor Al Pacino from 1996 until 2003. The couple have twins, son Anton James and daughter Olivia Rose (born 2001).