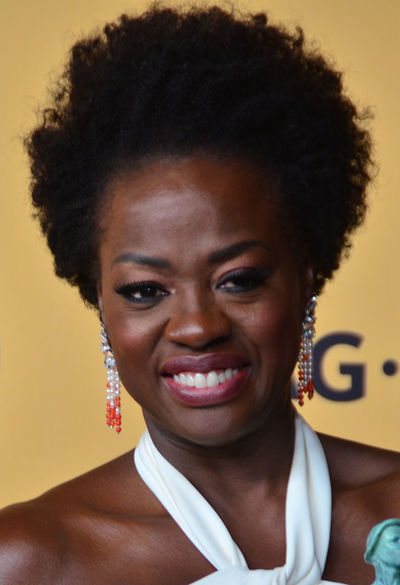 Viola Davis (born August 11, 1965) is an American producer and actress of stage, screen, and television. After graduating from the Juilliard School in 1993, Davis began her career on stage and won an Obie Award in 1999 for her performance as Ruby McCollum in Everybody's Ruby. She played supporting and minor roles in several films and television series in the late 1990s and early 2000s, including the films Kate & Leopold (2001) and Far from Heaven (2002), and the television series Law & Order: Special Victims Unit. In 2001, she won the Tony Award for Best Featured Actress in a Play for her role as Tonya in the original production of King Hedley II.

Davis' film breakthrough came in 2008 when her supporting role in the drama Doubt earned her several nominations, including the Golden Globe, SAG, and the Academy Award for Best Supporting Actress. Greater success came to Davis in the 2010s. She won the 2010 Tony Award for Best Actress in a Play for her role as Rose Maxon in the revival of Fences. For her lead role as a maid in 1960s in the comedy-drama The Help (2011), she received nominations for the Golden Globe, BAFTA, and the Academy Award for Best Actress, and won a SAG Award.

From 2014 onward, Davis began starring as the lawyer Annalise Keating on the ABC drama How to Get Away with Murder, and in 2015 she became the first black woman of any nationality to win the Primetime Emmy Award for Outstanding Lead Actress in a Drama Series. The role also won her two SAG Awards in 2015 and 2016. In 2012, she was listed by Time as one of the 100 most influential people in the world. Davis and her husband, Julius Tennon, are the founders of the production company JuVee Productions. Davis has starred in their productions Lila & Eve (2015) and Custody (2016).

Davis was born on her grandmother's farm, on the former Singleton Plantation, in St. Matthews, South Carolina. She is the second youngest of six children. Her father, Dan Davis, was a horse trainer; her mother, Mary Alice, was a maid, factory worker, and homemaker, as well as a civil rights activist. Her family moved to Central Falls, Rhode Island a few months after she was born. Davis has described herself as having "lived in abject poverty and dysfunction" during her childhood.

Davis partially credits her love of stage acting with her involvement in the arts at her alma mater, Central Falls High School. Davis majored in theatre at Rhode Island College, graduating in 1988; in 2002 she received an honorary doctorate in Fine Arts from the college. She was involved in the federal TRIO Upward Bound and TRIO Student Support Services programs. While Davis was a teenager, her talent was recognized by Bernard Masterson when, as director of Young People's School for the Performing Arts in West Warwick, Rhode Island, he awarded Davis a scholarship into that program.

Davis appeared in numerous films, including three films directed by Steven Soderbergh – Out of Sight, Solaris and Traffic, as well as Syriana, which Soderbergh produced. Viola was also the uncredited voice of the parole board interrogator who questions Danny Ocean (George Clooney) in the first scene in Ocean's Eleven. She also gave brief performances in the films Kate & Leopold and Antwone Fisher. Her television work includes a recurring role in Law & Order: Special Victims Unit; starring roles in two short-lived series, Traveler and Century City; and a special guest appearance in "Badge", a Law & Order: Criminal Intent episode. In 2008, Davis played Mrs. Miller in the film adaptation to the Broadway play Doubt, with Meryl Streep, Philip Seymour Hoffman, and Amy Adams. Davis was nominated for several awards for this performance, including a Golden Globe and an Academy Award for Best Supporting Actress.

On June 30, 2009, Davis was inducted into The Academy of Motion Picture Arts and Sciences. On June 13, 2010, Davis won her second Tony Award for her role as Rose Maxson in a revival of August Wilson's Fences. She is the second African-American woman to win the award, after Phylicia Rashād.

Davis married actor Julius Tennon in June 2003. They have a daughter, Genesis, whom they adopted as a newborn in October 2011. Davis is stepmother to Tennon's two sons from previous relationships.

She is the cousin of actor Mike Colter, who is famous for portraying the Marvel Comics character Luke Cage.