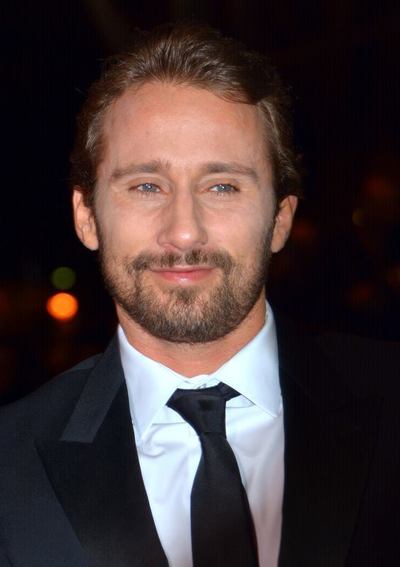 Matthias Schoenaerts (born 8 December 1977) is a Belgian actor, producer and graffiti artist. He made his film debut at the age of 13 in Daens (1992), which was nominated for the Academy Award for Best Foreign Language Film. He is best known for his roles as Filip in Loft (2008), Jacky Vanmarsenille in the Oscar-nominated Bullhead (2011), Ali in Rust and Bone (2012), Eric Deeds in The Drop (2014), Bruno von Falk in Suite Française (2015), Gabriel Oak in Far from the Madding Crowd (2015) and Hans Axgil in The Danish Girl.

In 2013, he won the César Award for Most Promising Actor for Rust and Bone.

In 2015, he was named Knight of the Order of Arts and Letters in France.

Schoenaerts was born in Antwerp, Belgium. He is the son of actor Julien Schoenaerts and costume designer/translator/French teacher Dominique Wiche. He has an older half brother, Bruno Schoenaerts (born 1953), who is a lawyer.

In 1987, at nine years old, he appeared on a stage production of Antoine de Saint-Exupéry's The Little Prince opposite his father, who was also the director; his mother was the costume designer of the play.

Schoenaerts grew up bilingual speaking Flemish/Dutch and French. He is also fluent in English,[8] which he learned by watching American movies.

He started producing graffiti as a teenager under the pseudonym "Zenith", even going to New York to collaborate with the Bronx group TATS CRU. It is possible to watch some videos of Schoenaerts doing graffiti in Belgium on YouTube.

He was close to becoming a professional soccer player and was on the books of Belgian team Beerschot AC, but gave up when he was 16 years old.

At the age of 13, Schoenaerts made his film debut with a small role in the 1992 Belgian film Daens, which was nominated for the Academy Award for Best Foreign Language Film. His father also starred in the film.

In 2003, Schoenaerts was named one of "Europe's Shooting Stars" by the European Film Promotion.

After completing studies at The Academy of Dramatic Arts in Antwerp, he featured in several shorts and feature films. In 2002, he starred in Dorothée Van Den Berghe's Meisje (Girl); Tom Barman's Any Way the Wind Blows in 2003; Rudolf Mestdagh's Ellektra and Roel Mondelaers & Raf Reyntjens's sci-fi short film A Message from Outer Space, which he also produced in 2004.

In 2006, Schoenaerts played Dennis in Hilde Van Mieghem's Love Belongs to Everyone, and appeared in a small role in Paul Verhoeven's Black Book.

In 2007, he starred in Ben van Lieshout's De Muze and in Erik Bruyn's Nadine.

In 2008, he played Bob in Pieter van Hees's horror film Left Bank, and most notably played the role of Filip in Erik Van Looy's Loft, which became the most successful Flemish film at the Belgian box-office, earning over $7,075,161. In the same year, Schoenaerts also starred in the mini-series The Emperor of Taste (De smaak van De Keyser), playing a Belgian soldier in World War II.

In 2011, Schoenaerts played the lead role in Bullhead, directed by Michaël R. Roskam, which was nominated for the Best Foreign Language Oscar. His performance in the film was well received and won him the FIPRESCI Award for best actor at Palm Springs International Film Festival in January 2012. The jury praised the actor's "superb portrayal of an innocent and sensitive man trapped in a truculent body." He also won the Magritte Award for Best Actor.

In 2012, he starred in Jacques Audiard's Rust and Bone (De rouille et d'os) alongside Marion Cotillard. The film premiered at the 2012 Cannes Film Festival and was a critical and box office hit in France. On 22 February 2013, Matthias won the César Award for Most Promising Actor for his role in Rust and Bone.

In 2014, Schoenaerts appeared alongside Clive Owen, Billy Crudup and again Marion Cotillard in the thriller Blood Ties, in which he played Anthony Scarfo. The film premiered at the 2013 Cannes Film Festival. He also played Eric Deeds in The Drop, his second film with Michael R. Roskam, starring opposite Tom Hardy, Noomi Rapace and James Gandolfini. In the same year, he was cast as Roy Cady in the film adaptation of Nic Pizzolatto's novel Galveston, directed by Janus Metz Pedersen.

Schoenaerts was the face of Louis Vuitton Menswear Spring/Summer 2014.

In 2015, the actor appeared in 7 films: The Loft, the American remake of the Belgian film Loft, in which he played the same character; in Saul Dibb's Suite Française, playing the German soldier Bruno von Falk opposite Michelle Williams and Kristin Scott Thomas; in Thomas Vinterberg's Far from the Madding Crowd as Gabriel Oak, one of Carey Mulligan's three love interests; in Alan Rickman's period drama A Little Chaos, as French landscape architect André Le Nôtre, opposite Kate Winslet.

Schoenaerts also starred in Alice Winocour's French thriller Disorder (Maryland), as an ex-soldier suffering from post traumatic stress disorder; he played Paul in Luca Guadagnino's thriller A Bigger Splash, starring opposite Tilda Swinton, Ralph Fiennes and Dakota Johnson, and also played the art-dealer Hans Axgil in Tom Hooper's The Danish Girl. A Bigger Splash and The Danish Girl made their world premieres at the 2015 Venice Film Festival, both were screened in the official competition.