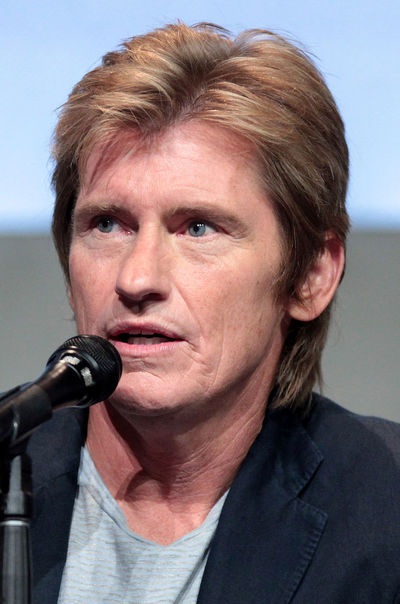 Denis Colin Leary (born August 18, 1957) is an American actor, writer, producer, singer, and comedian. He was the star and co-creator of Rescue Me, which ended its seventh and final season on September 7, 2011. Leary has starred in many motion pictures, most recently as Captain George Stacy in Marc Webb's 2012 film The Amazing Spider-Man, Cleveland Browns Head Coach Vince Penn in Ivan Reitman's 2014 film Draft Day, and the voice of Diego in the Ice Age franchise. As of 2015, he wrote and has been starring in the comedy series Sex&Drugs&Rock&Roll, which premiered on FX on July 16, 2015.

Denis Colin Leary was born on August 18, 1957 in Worcester, Massachusetts, the son of Roman Catholic immigrant parents from County Kerry, Ireland. His mother, Nora (née Sullivan) (b. 1929), was a maid, and his father, John Leary (1924-1985), was an auto mechanic. Being the son of Irish parents, Leary is a citizen of both the United States and Ireland. Through marriage, Leary is a third cousin of talk show host Conan O'Brien. He attended Saint Peter's High School (now Saint Peter-Marian High School), in Worcester and graduated from Emerson College, in Boston. At Emerson, he met fellow comic Mario Cantone, whom to this day Leary considers his closest friend. At the school, he founded the Emerson Comedy Workshop, a troupe that continues on-campus today. After graduating with the Emerson Class of 1981, he took a job at the school teaching comedy writing classes and maintained the job for five years. He received an honorary doctorate and spoke briefly at his alma mater's undergraduate commencement ceremony on May 16, 2005; he is thus credited as "Dr. Denis Leary" on the cover of his 2009 book, Why We Suck.

Leary began working as a comedian in the Boston comedy scene of the 1980s at the underground club Play It Again Sam's. But his first real gig was at the Rascals Comedy Club as part of the TV show The Rascals Comedy Hour on October 18, 1990. He also wrote and appeared on a local comedy series, The Late, Late Show, hosted by his friend Lenny Clarke and written by writer Martin Olson. Leary and Clarke both spoke about their early affiliations and influences in the Boston comedy scene in the documentary film When Standup Stood Out (2006). It was during this time that he developed his stage persona. He also appeared in skits on the MTV game show Remote Control, playing such characters as Keith Richards of the Rolling Stones, the "brother" of co-host Colin Quinn, and artist Andy Warhol.

Leary first earned fame when he ranted about R.E.M. in an early 1990s MTV sketch. Several other commercials for MTV quickly followed, in which Leary would rant at high speeds about a variety of topics, playing off the then-popular and growing alternative scene. One of these rants serves as an introduction to the video of "Shamrocks and Shenanigans (Boom Shalock Lock Boom)" by House of Pain. He released two records of his stand-up comedy: No Cure for Cancer (1993) and Lock 'n Load (1997). In late 2004, he released the EP Merry F#%$in' Christmas, which included a mix of new music, previously unreleased recordings, and some tracks from Lock 'n Load.

In 1993, his sardonic song about the stereotypical American male, "Asshole", achieved much notoriety. However, this bit was allegedly stolen from Louis CK, discussed by Louis on an interview on the Opie and Anthony Show. It was voted #1 in an Australian youth radio poll (the Triple J Hottest 100). The song was used as part of the Holsten Pils series of ads in the UK, in which Leary was participating, with adapted lyrics criticizing a drunk driver. The single was a minor hit there, peaking at No. 58 in the UK Singles Chart in January 1996.

Leary has appeared as an actor in more than 40 films, including The Sandlot, as Scott's stepfather Bill, Monument Ave., The Matchmaker, The Ref, Draft Day, Suicide Kings, Dawg, Wag the Dog, Demolition Man, Judgment Night, The Thomas Crown Affair, and Operation Dumbo Drop. He had a tiny part in Oliver Stone's Natural Born Killers which was eventually cut. He held the lead role in two television series, The Job and Rescue Me; he co-created the latter, in which he played Tommy Gavin, a New York City firefighter dealing with alcoholism, family dysfunction and other issues in post-9/11 New York City. He received Emmy Award nominations in 2006 and 2007 for Outstanding Lead Actor in a Drama Series for Rescue Me, and in 2008 for Outstanding Supporting Actor In A Miniseries Or A Movie for the HBO movie Recount. Leary was offered the role of Dignam in The Departed (2006) but turned it down due to scheduling conflicts with Rescue Me. He provided voices for characters in animated films, such as a fire-breathing dragon named Flame in the series The Agents, a pugnacious ladybug named Francis in A Bug's Life and a prehistoric saber-toothed tiger named Diego in the Ice Age film series. He has produced numerous movies, television shows, and specials through his production company, Apostle; these include Comedy Central's Shorties Watchin' Shorties, the stand-up special Denis Leary's Merry F#$%in' Christmas, and the movie Blow.

Leary has been married to author Ann Lembeck Leary since 1989. They met when he was her instructor in an English class at Emerson College. They have two children, son John Joseph "Jack" (born 1990) and daughter Devin (born 1992). Ann Leary published a memoir, An Innocent, a Broad, about the premature birth of their son on an overseas visit to London. She has also written a novel, Outtakes From a Marriage, which was published in 2008. Her second novel, The Good House, was published in 2013.

Leary is an ice hockey fan and has his own backyard hockey rink at his home in Roxbury, Connecticut, with piping installed under the ice surface to help the ice stay frozen. He is a fan of the Boston Bruins and the Boston Red Sox, as well as the Green Bay Packers.