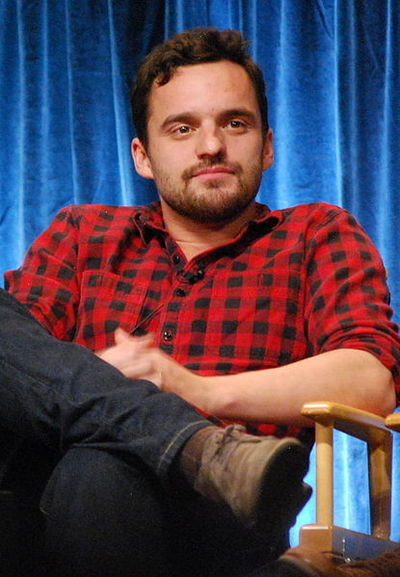 Jake Mark Johnson (born May 28, 1978), also billed as Jake M. Johnson, is an American actor and comedian, most known for playing Nick Miller in the Fox comedy series New Girl opposite Zooey Deschanel, for which he has received a Teen Choice Award nomination among others. Johnson also co-starred in the 2009 film Paper Heart and the 2012 film Safety Not Guaranteed, as well as appearing in Get Him to the Greek and 21 Jump Street. His first starring role in a feature film was Drinking Buddies, and he also starred in the 2014 comedy Let's Be Cops, alongside fellow New Girl star Damon Wayans, Jr..

Johnson was born Jake Weinberger in Evanston, Illinois, a northern suburb of Chicago. He was named after his maternal uncle, Mark Johnson, who died at the age of 26 in a motorcycle accident in 1977, a year before Jake was born. His father, Ken Weinberger, owned a car dealership. His parents divorced when he was two, and he and his brother, Dan, and sister, Rachel, were raised by his mother, Eve Johnson, an artist who made stained glass windows. Johnson is also the youngest out of all his siblings.

He grew up a fan of the Second City improv troupe, which showed off the talents of actors such as John Belushi, Tina Fey and Chris Farley. He graduated from New Trier High School in Winnetka and started his post-secondary education at the University of Iowa. While in Iowa City, he wrote a play, which wound up earning him admission to the Dramatic Writing Department at NYU's prestigious Tisch School of the Arts, followed by the 2002 John Golden Playwriting Prize and the Sloan Fellowship for Screenwriting. The New York off-Broadway group, The Ensemble Studio Theater, produced his play Cousins.

While in New York, Johnson started the sketch comedy troupe The Midwesterners, modeling their material and style after HBO's sketch comedy Mr. Show with Bob and David. After moving to Los Angeles, Johnson supported himself as a waiter and a production assistant, also scoring a series of bit feature and guest TV roles. In 2007, he landed a more regular gig with the TBS mini-show Derek and Simon: The Show, produced by Bob Odenkirk.

In 2009, he appeared in the mockumentary Paper Heart. In 2010, Johnson was cast in a small role in the Russell Brand comedy, Get Him to the Greek. He played Uma Thurman's character's brother in the romantic comedy Ceremony, and as a buddy of Ashton Kutcher's character in No Strings Attached. In 2011, he played Jesus in A Very Harold & Kumar 3D Christmas. In 2012, he appeared in the film version of 21 Jump Street, which starred Jonah Hill and Channing Tatum. Johnson made an appearance at the 2012 Sundance Festival as one of the leads in Safety Not Guaranteed.

Since 2011, Johnson has been starring as Nick Miller alongside Zooey Deschanel on New Girl.

Johnson lives in Los Angeles, and is also a member of both the Sunday Men's Basketball League and the Interstate 5 Tennis Association.