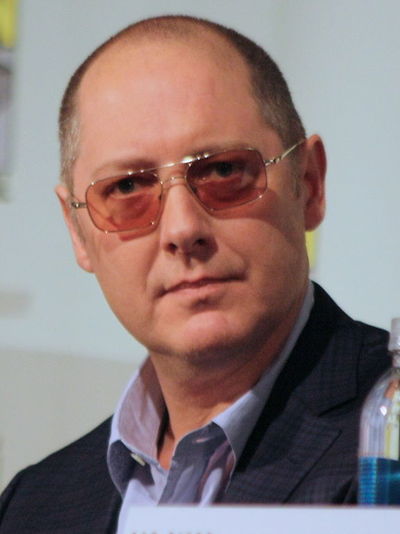 His most well-known television roles are those of attorney Alan Shore in The Practice and its spin-off Boston Legal (for which he won three Emmy Awards), and Robert California in the comedy-mockumentary The Office. He currently stars as high-profile criminal Raymond "Red" Reddington in the crime drama The Blacklist and is set to play the villainous android Ultron in Marvel Studios' upcoming 2015 superhero film Avengers: Age of Ultron.

Spader was born in Boston, Massachusetts, the son of Jean (née Fraser) and Stoddard Greenwood "Todd" Spader, both teachers. During his early education, Spader attended The Pike School (where his mother taught Art) and enrolled in the Brooks School (where his father taught) in North Andover, Massachusetts for one year. He later transferred to Phillips Academy but dropped out in the 11th grade to pursue acting at the Michael Chekhov School in New York City. Before becoming a full-time actor, he held a variety of jobs, including yoga instructor, busboy, truck driver, stable boy, and railroad car loader.

Spader's first major film role was in the film Endless Love (1981), and his first starring role was in Tuff Turf (1985). However, he did not rise to stardom until 1986, when he played the rich, arrogant playboy Steff in Pretty in Pink. He co-starred in Mannequin (1987) and the film adaptation of Less Than Zero (1987), in which he played a drug dealer named Rip. Supporting roles in films such as Baby Boom (1987) and Wall Street (1987) followed until his breakthrough in Sex, Lies, and Videotape (1989), in which he played a sexual voyeur who complicates the lives of three Baton Rouge, Louisiana residents. For this performance, he received the Best Actor Award at the Cannes Film Festival.

Spader's roles in the early 1990s included a young, affluent widower opposite Susan Sarandon in the romantic drama White Palace (1990), John Cusack's best friend in the drama True Colors (1991), and a poker-playing drifter in The Music of Chance (1993). In 1994, he starred as Egyptologist Daniel Jackson in the sci-fi film Stargate. In 1996, he played car accident fetishist James Ballard in the controversial Canadian film Crash and assassin Lee Woods in 2 Days in the Valley. In 1997, Spader guest starred in the Seinfeld episode "The Apology", as an angry recovering alcoholic who refuses to apologize to George for making fun of him. In 2000, he played a drug-addicted detective tracking down a serial killer in The Watcher. In 2002, he starred as a sadistic boss in the critically acclaimed film Secretary.

From 2004 to 2008, Spader starred as Alan Shore in the series Boston Legal, in which he reprised his role from the television series The Practice. He won the Emmy Award for Outstanding Lead Actor in a Drama Series in 2004 for his portrayal on The Practice and won it again in 2005 and 2007 for Boston Legal. With the 2005 win, he became one of only a few actors to win an Emmy award while playing the same character in two different series. Even rarer, he won a second consecutive Emmy while playing the same character in two different series. He also won the Satellite Award for Best Actor in a Series, Comedy or Musical for Boston Legal in 2006.

On August 29, 2013, Marvel Studios announced that Spader would join the Avengers: Age of Ultron (2015) cast as villainous robot Ultron. Spader currently stars in the NBC series The Blacklist, which premiered on NBC September 23, 2013. He portrays Raymond "Red" Reddington, one of the FBI's most wanted fugitives.

Spader met his first wife, decorator Victoria Kheel, while working in a yoga studio after he moved to New York City in the 1980s. They married in 1987 and have two sons, Elijah and Sebastian. Spader filed for divorce from Kheel in 2004. He began dating his former Alien Hunter (2003) co-star, Leslie Stefanson, in 2002; they have one son, Nathaneal (born August 2008).