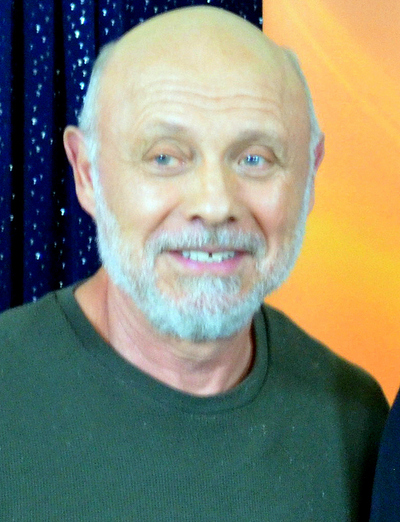 Héctor Elizondo (born December 22, 1936) is an American actor. Elizondo's first major role was that of "God" in the play Steambath, for which he won an Obie Award. Since then Elizondo has participated in over eighty films and has made numerous television appearances, including his Emmy Award-winning role on the series Chicago Hope.

Elizondo was born in New York City, the son of Carmen Medina Reyes and Martín Echevarría Elizondo, a notary public and accountant. His parents moved from Puerto Rico to New York City, with the hope of finding a better way of life.

At a young age, Elizondo demonstrated a talent in sports and music. He sang for the Frank Murray Boys' Choir when he was 10 years old. Upon graduating from Jr. High School in 1950, he enrolled in the High School of the Performing Arts. He also attended another public high school where he excelled in basketball and baseball. His baseball skills were good enough for him to be scouted by both the San Francisco Giants and the Pittsburgh Pirates.

In 1954, Elizondo enrolled in City College of New York, intending to become a history teacher. However, during his freshman year he became a father and dropped out of college, going to work full-time in order to support his family. Later, he divorced and gained full custody of his son, Rodd.

From 1962 to 1963, Elizondo studied dance at the Ballet Arts Company at Carnegie Hall and in 1963 he landed parts in two Off-Broadway shows: Kill the One-Eyed Man and The Great White Hope. His first major success came when he played "God" in guise of a Puerto Rican steam room attendant in the play Steambath. Elizondo won an Obie award for his performance. Many of his roles involve playing a friend or sympathizer to the lead character. As a voice-actor, he played Bane, one of the more aggressively themed characters in Batman: Mystery of the Batwoman. In 1974, Elizondo played against type as ex-mafioso-turned-subway hijacker "Mr. Grey" in The Taking of Pelham One Two Three. Elizondo starred as a Puerto Rican widower on the CBS television series, Popi, which aired during the 1975-1976 television season. The short-lived series, which ran for eleven episodes, was one of the first American network television series to feature a Latino theme and cast. He was a member of the cast of the 1985-1986 CBS situation comedy Foley Square.

Elizondo has been married three times. He has a son from his first marriage. Since 1969 he has been married to Carolee Campbell, an Emmy Award winning actress, photographer and publisher. They live in Sherman Oaks, California.