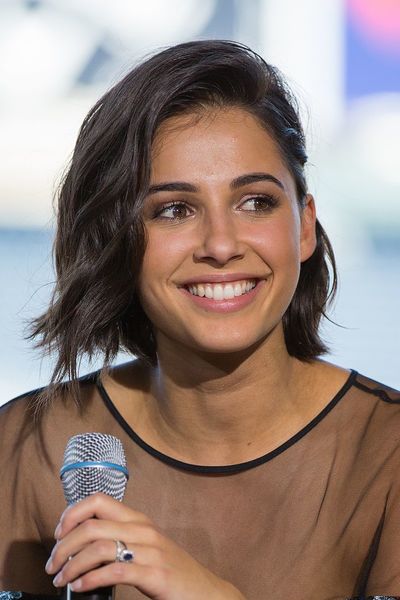 Naomi Scott (born 6 May 1993) is an English actress and singer. She is best known for co-starring as Maddy Shannon in the science-fiction drama series Terra Nova. Scott also starred as Mohini "Mo" Banjaree in the Disney Channel Original Movie Lemonade Mouth and as Megan in TV series Life Bites.

Scott began her singing career with the Bridge Church Youth Band. She attended Davenant Foundation School and performed regularly in school musical and drama productions. She was later discovered by British pop singer Kelle Bryan from the all-girl band Eternal, who signed her as a client. She went to work with British songwriters and producers Xenomania.

Her first major acting role was a Disney Channel UK series Life Bites. In 2010, she was cast as Mohini "Mo" Banarjee in the 2011 Disney Channel Original Movie Lemonade Mouth, her first role in an American production. That same year, she was cast as Maddy Shannon, in the science fiction series Terra Nova which premiered in September 2011 on Fox. The series was not renewed for a second season. In 2013, Scott appeared in the music video for the song "Hurricane", by her Lemonade Mouth co-star Bridgit Mendler. In August 2014, she independently released her debut EP Invisible Division. She will portray Kimberly/Pink Ranger in the 2017 film, Power Rangers.

Scott was born in London, England. Her mother, Usha Scott, is of Gujarati Indian descent from Uganda, and her father, Chris Scott, is British. Her father serves as senior pastor of the Bridge Church, Woodford in Redbridge. Scott has participated in missionary and outreach work. In June 2014, she married footballer Jordan Spence after four years of dating.