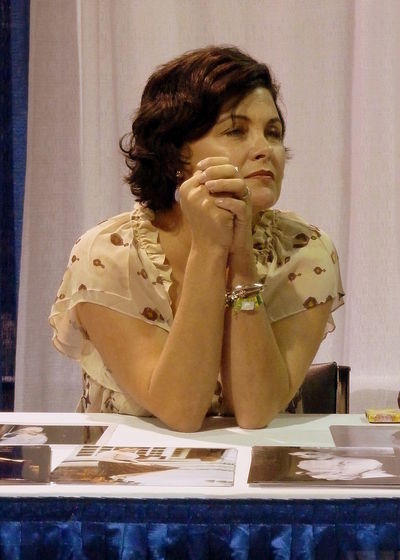 Fenn was born Sheryl Ann Fenn on February 1, 1965 in Detroit, Michigan. She comes from a family of musicians: her mother is keyboard player Arlene Quatro, her aunt is singer Suzi Quatro, her grandfather Art Quatro was a jazz musician, and her father, Leo Fenn, managed such rock bands as Suzi Quatro's The Pleasure Seekers, Alice Cooper, and The Billion Dollar Babies. Fenn is of Italian and Hungarian descent on her mother's side, and of Irish and French descent on her father's. She was raised Catholic.

Fenn frequently traveled with her mother and two older brothers before the family settled in Los Angeles when she was 17. Not wanting to start with a new school again, Fenn dropped out after her junior year and decided to pursue acting, enrolling at the Lee Strasberg Theatre Institute.

Fenn began her career with a number of B-movies, including The Wild Life (1984, opposite Chris Penn), the 1986 skater film Thrashin' (opposite Josh Brolin and Pamela Gidley), the 1986 teen car action and revenge fantasy The Wraith (alongside Charlie Sheen and opposite Nick Cassavetes), the 1987 horror film Zombie High (alongside Virginia Madsen), and the Beauty and the Beast-inspired erotic movie Meridian. She had a part in the 1985 cult teen-comedy Just One of the Guys in which she tries to seduce a teenaged girl who was disguised as a boy, played by Joyce Hyser. Fenn starred alongside Johnny Depp in the 1985 short student film Dummies, directed by Laurie Frank for the American Film Institute. Fenn and Depp dated for three and a half years, subsequently getting engaged. In 1987, she joined Depp in a season-one episode of 21 Jump Street called "Blindsided".

Fenn has described many of these early films as sexploitation films "where directors tried to convince [her] to appear naked after the contract was signed." In a February 1993 interview she explained,

“Still, I did a lot of movies instead of waitressing or that kind of thing at the beginning, and it wasn't as if I even took acting very seriously when I started. I was in California for the first time. I was going to clubs, I was going here, I was going there, I was skipping acting classes when I could. Luckily, I had an agent who really believed in me and she just kept pushing me, thinking something would happen.”

Fenn landed her first starring role, as an engaged heiress to an old Southern family who falls for carnival worker Richard Tyson, in Zalman King's erotic drama film Two Moon Junction, after which she wanted to hide for a year: "I was so embarrassed about how it turned out that I went into a cocoon for a year afterwards." Junction was meant to be Fenn’s big break, but the film turned into another sexploitation film. "A lot of people said some really bad things about me for doing such a sexy movie. But I decided to do it because I wasn't comfortable with the material. I didn't want to make choices that would always put me in a place that was comfortable and secure. I thought interesting things would happen and I would grow. Interesting things did happen. I cried at the end of all my love scenes."

After these film experiences, Fenn decided to take control of her career. "I decided to be more myself and not to be pushed into what other people wanted me to be. It’s scary how little imagination many people in this business have."

Fenn won her most famous role and made an impression on the public when she was cast by David Lynch and Mark Frost as the tantalizing, reckless Audrey Horne, a high school femme fatale, in the critically acclaimed TV series Twin Peaks. The series ran from 1990 to 1991, and the character of Audrey was one of the most popular with fans, in particular for her unrequited love for FBI Special Agent Dale Cooper (played by Kyle MacLachlan) and her style from the 1950s (with her saddle shoes, plaid skirts, and tight sweaters). Fenn reached cult status with a scene in which she danced to Angelo Badalamenti's music and a scene in which she knotted a cherry stem in her mouth. "With Sherilyn Fenn, Twin Peaks came on and effortlessly destroyed every other show’s sexuality", said James Marshall, one of her cast-mates. Speaking in September 1990, Fenn pointed out: "Audrey is a woman-child who dresses like the girls in the '50s and shows her body. But she's daddy's little girl at the same time." In the show's second season, when the idea of pairing Audrey with Cooper was abandoned, Audrey was paired with other characters like Bobby Briggs (played by Dana Ashbrook) and John Justice Wheeler (Billy Zane). About Audrey, Fenn said:

“Audrey's been great for me. She has brought out a side of me that’s more mischievous and fun that I had suppressed, trying to be an adult. She has made it OK to use the power one has as a woman to be manipulative at times, to be precocious. She goes after what she wants vehemently and she takes it. I think that’s really admirable. I love that about her.”

Shortly after shooting the Twin Peaks' pilot episode, David Lynch gave her a small part in Wild at Heart, as a girl injured in a car wreck, obsessed by the contents of her purse, alongside Nicolas Cage and Laura Dern. The film won the Golden Palm Award at the 1990 Cannes Film Festival. "David’s direction was, ‘Only think of this: bobby pins, lipstick, wallet, comb, that’s it.’ It’s very abstract." "I just pictured her being able to do this," said Lynch of her scene, "she’s like a broken China doll." David Lynch, who once described Sherilyn Fenn as "five feet of heaven in a ponytail" (quoting from a 1958 record by The Playmates), said to Banner, who used that description as the title of his article, "She's a mysterious girl and I think that actresses like her who have a mystery – where there's something hiding beneath the surface – are the really interesting ones." "He's very creative and unafraid of taking chances," she said of the director. "I really respect him. He's wonderful." Also during this period, Fenn appeared on the cover and in a nude pictorial in the December 1990 edition of Playboy magazine.

After Twin Peaks, Fenn chose to focus on widening her range of roles and was determined to avoid typecasting. She stated, "They’ve offered me every variation on Audrey Horne, none of which were as good or as much fun." She turned down the Audrey Horne spinoff series that was offered to her, and unlike most of the cast, chose not to return for the 1992 prequel movie Twin Peaks: Fire Walk with Me, as she was then shooting Of Mice and Men.

Fenn dated pop singer Prince for a short time during 1985 and then Johnny Depp in 1986; their relationship lasted several years.

In 1994, Fenn married guitarist-songwriter Toulouse Holliday, whom she met on the set of Three of Hearts.