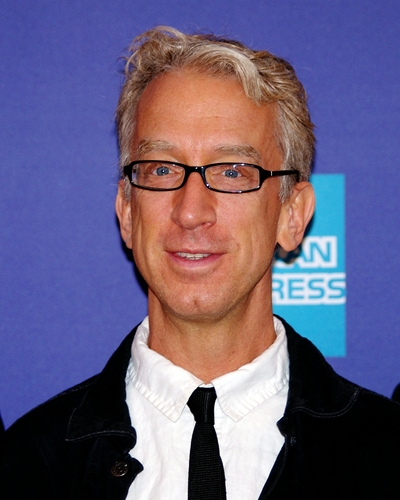 Andrew Roane "Andy" Dick (born December 21, 1965) is an American comedian, actor, musician and television/film producer. He is best known as a comic but is also known for his eccentric and controversial behavior. His first regular television role was on the short-lived but influential Ben Stiller Show. In the mid-1990s, he had a long-running stint on NBC's NewsRadio and was a supporting character on Less than Perfect. He briefly had his own program, The Andy Dick Show on MTV, and he is also noted for his outlandish behavior from a number of Comedy Central Roasts. He also landed in 7th place on the 16th season of Dancing with the Stars.

Dick was born Andrew Roane Dick in Charleston, South Carolina, on December 21, 1965, and he was adopted at birth by Allen and Sue Dick. He was brought up Presbyterian, and as a kid, he spent time living with his family in Connecticut, Pennsylvania, New York, and Yugoslavia before moving to Chicago in 1979. He attended Lassiter High School, which was being temporarily housed at George Walton Comprehensive High School in Cobb County, Georgia. Dick appeared in numerous theater productions during his high school years and was elected homecoming king his senior year in 1983. While in high school, Dick tended to use his name as a joke; and one day, he dressed in a homemade superhero costume and presented himself at school as "Super Dick". Dick graduated from Joliet West High School in 1984, and is a friend of actor Anthony Rapp, whom he had known since childhood. After graduating from high school, Dick joined Chicago's Second City, attended Columbia College Chicago, and took improv comedy classes at iO Theater.

Dick started his TV comedy career as a cast member on the sketch comedy program The Ben Stiller Show, which aired on the Fox Network from September 1992 to January 1993. Prior to this, Dick starred in an advertisement for the original Sonic The Hedgehog game in 1991.

In 1993, on the 3rd night of David Letterman's new CBS show, Dick appeared as "Donnie the CBS Page Who Likes to Suck Up", during which he gave a watch to Letterman. The host then handed him a pencil, prompting Dick to cry and then walk backstage to much applause.

One of his earliest film roles was a fictional version of himself the film adaptation of video game Double Dragon.

In 1993, Dick played himself in the mockumentary The Making of... And God Spoke. He also starred alongside MTV comedian Pauly Shore in the 1994 War Comedy film In the Army Now. In 1997, Dick had a supporting role alongside Luke Wilson and Jack Black in Bongwater, as Luke Wilson's gay friend who gives him a place to stay after his house burns to the ground. In 1999, Dick played a warm-hearted yet cowardly scientist that helped Dr. Claw in the movie Inspector Gadget.

In a 2006 interview with the Washington Post, he stated that he was bisexual.