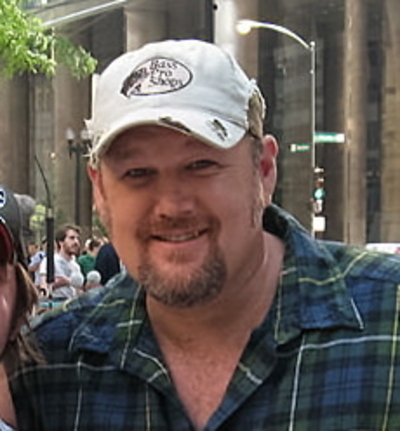 He was one of the members of the Blue Collar Comedy Tour, a comedy troupe which included Bill Engvall, Ron White, and Jeff Foxworthy (with whom he has starred on Blue Collar TV).

Whitney has released seven comedy albums, of which three have been certified gold by the RIAA for shipments of 500,000 copies. In addition, he has starred in three Blue Collar Comedy Tour-related movies, as well as in the films Larry the Cable Guy: Health Inspector, Delta Farce, and Witless Protection, as well as voicing Mater in the Cars franchise. Whitney's catchphrase: "Git-R-Done!" is also the title of his book.

On January 26, 2010, the TV channel History announced that it was ordering a series starring Whitney called Only in America with Larry the Cable Guy, in which he would explore the country and immerse himself in different lifestyles, jobs and hobbies. The first episode of the series aired on February 8, 2011.

According to a CMT biography, Whitney grew up on a pig farm in Pawnee City, Nebraska. He went to college at Baptist University of America, and the University of Nebraska. He credits his roommates from Texas and Georgia for inspiring his imitation Southern accent. He dropped out after his junior year after trying his hand at comedy.

Whitney started his career in radio in the early 1990s when he made regular radio appearances via phone on programs such as The Ron and Ron Show, The Chris Baker Show on KDGE and KEZO's The Todd and Tyler Show in Omaha, Nebraska, as well as the Kirk, Mark, and Lopez morning show on WIYY in Baltimore, Maryland. He was also a frequent guest on The Johnny Dare Morning Show on 98.9/KQRC, Kansas City.

He became famous developing the Larry character, a personality that he now maintains throughout his stage act. The Larry character has a stereotypical redneck appearance and a thick Southern accent, recounts stories about his "family," and uses, among other common expressions, his own catchphrase "Git-R-Done!" A part of Whitney's routine is his affected Southern accent. He says in interviews and in his autobiographical book GIT-R-DONE that he deliberately "turns on" the accent both on and off stage, because he may forget it if he kept his normal accent intact. He uses catchphrase humor, including "Lord, I apologize, and be with the starvin' Pygmies down there in New Guinea. Amen." and "I don't care who ya are, that's funny right there" after certain jokes.

His first two comedy albums, Lord, I Apologize (2001) and The Right to Bare Arms (2005), have both been certified gold by the RIAA. A third album, Morning Constitutions, and its accompanying TV special were released in 2007.

Whitney resides in Sanford, Florida. He married his wife, Cara Whitney, in 2005. They have two children together: a son, Wyatt (born August 2006), and a daughter, Reagan (born October 2007).