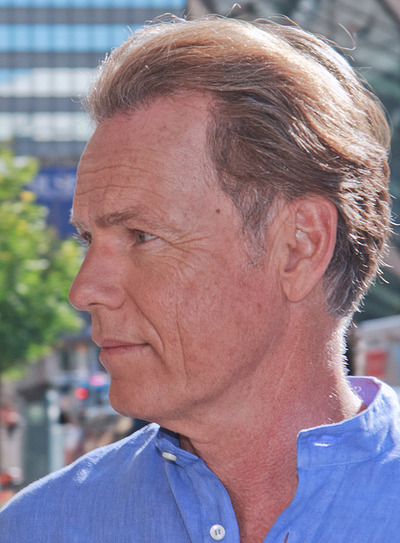 Stuart Bruce Greenwood (born August 12, 1956) is a Canadian actor and musician. He is generally known for his roles as U.S. presidents in Thirteen Days and National Treasure: Book of Secrets and for his role as Captain Christopher Pike in the 2009 Star Trek film and its sequel, Star Trek Into Darkness. He has appeared in several supporting roles, such as Hollywood Homicide, Double Jeopardy, Déjà Vu, I, Robot, Dinner for Schmucks, Capote, and as the motion capture alien dubbed "Cooper" in Super 8. He has also dabbled in voice acting, contributing to the Canadian animated series Class of the Titans as Chiron and the voice of Bruce Wayne/Batman in Young Justice.

Greenwood was born in Noranda, Quebec, the son of Mary Sylvia (née Ledingham), a nurse who worked in an extended care unit, and Hugh John Greenwood, a Vancouver-born geophysicist and teacher who taught at Princeton University. He is married to Susan Devlin and lives in Los Angeles.

He had prominent roles in the award winning Atom Egoyan films Exotica, The Sweet Hereafter, and Ararat. He appeared in the 1980s teen cult film The Malibu Bikini Shop and starred in Mee-Shee: The Water Giant.