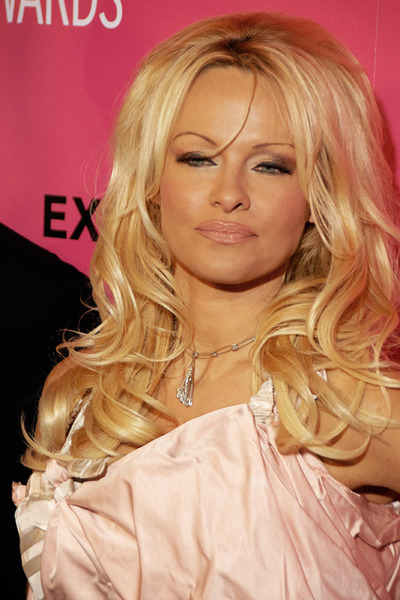 Pamela Denise Anderson (born 1 July 1967) is a Canadian-American actress, model, producer, author, activist, and former showgirl, known for her roles on the television series Home Improvement, Baywatch, and V.I.P. She was chosen as a Playmate of the Month for Playboy magazine in February 1990. For a time, she was known as Pamela Anderson Lee (or Pamela Lee) after marrying Mötley Crüe drummer Tommy Lee. She maintains dual Canadian and American citizenship. Anderson is a notable member of the Animal Rights movement and has conducted campaigns condemning the commercial fur industry and promoting veganism through the animal welfarist organisation PETA.

Anderson was born in Ladysmith, British Columbia, the daughter of Barry, a furnace repairman, and Carol (née Grosco) Anderson, a waitress. Her great-grandfather, Juho Hyytiäinen, was Finnish, a native of Saarijärvi, and left the Grand Duchy of Finland (which was a part of the Russian Empire at the time) in 1908. He changed his name to Anderson when he arrived as an immigrant. Anderson also has Russian ancestry on her mother's side. During high school, Anderson was a volleyball player.

After graduating from École Highland Secondary School in 1985, Anderson moved to Vancouver and worked as a fitness instructor.

During the summer of 1989, Anderson went with friends to a BC Lions Canadian Football League game at BC Place in Vancouver, during which live video of her wearing a tightly-fitted Labatt's Beer t-shirt was shown on the stadium's huge video screen, causing an immense roar of approval from the crowd. As part of a PR event for the brewery, she was then escorted down to field level to wide applause. From that event, her photographer boyfriend Dan Ilicic produced a poster of his own called the Blue Zone Girl.

In the aftermath of her sudden Vancouver celebrity, she appeared as the cover girl on Playboy magazine's October 1989 issue. At that point she decided to live in Los Angeles to further pursue her modeling career ambitions. Playboy subsequently chose her as Playmate of the Month in their February 1990 issue, in which she appeared in the centerfold photo. Anderson then elected to have breast implant surgery. Anderson has since appeared in Playboy several times in the 1990s and 2000s.

Anderson's Playboy career spans twenty-two years, including parts of four decades, (1989–2011), and she has appeared on more Playboy covers than anyone else. She has also made appearances in the publication's newsstand specials. Anderson wrote the foreword in the Playboy coffee table book Playboy's Greatest Covers.

After her move to Los Angeles, she won a minor role as the original "Tool Time girl" on the hit television sitcom, Home Improvement. She left the show after two seasons and won the role of C. J. Parker on Baywatch, a role she played between 1992 and 1998. Anderson was still modeling for Outdoor Life and appearing on the cover of the magazine each year. In 1993, Anderson appeared in a music video "Can't Have Your Cake" by Vince Neil to promote his first solo album Exposed.

In 1994, she was cast in her first starring film role, in Raw Justice, also known as Good Cop, Bad Cop, costarring with Stacy Keach, David Keith and Robert Hays. Under the alternate title, the film won the Bronze Award at the Worldfest-Charleston in the category for dramatic theatrical films.

In 1996, she appeared in Barb Wire playing Barbara Rose Kopetski, which was later claimed by some sources to be Anderson's real name, although it is not. The movie, a thinly veiled futuristic remake of Casablanca, was not a commercial success. In April 1997, she guest-hosted Saturday Night Live. She appeared on one of two covers for the September issue of Playboy.

In September 1998, Anderson starred as Vallery Irons in the Sony Pictures Entertainment syndicated show V.I.P. created by J. F. Lawton. Blending action and humor in a fast-paced adventure series, with Anderson often poking fun at her tabloid image, the show explored the exciting and sometimes treacherous lives of the rich and famous. The series lasted through a successful four-year run. In 1999, she appeared as a giantess in the music video for "Miserable" by California alternative rock band Lit. Her role as C.J. Parker gave her more popularity and gained her attention from international viewers. She returned to Baywatch for the 2003 reunion movie, Baywatch: Hawaiian Wedding. She appeared on The Nanny as Fran's rival, Heather Biblow.

In early 2004, Anderson returned to the spotlight. In May, she appeared naked on the cover of Playboy magazine. It was the first time she had appeared naked on any magazine cover. Later, she posed naked for Stuff and GQ magazines.

Anderson became a naturalized citizen of the United States on 12 May 2004, while retaining her Canadian citizenship. She has lived in Southern California since 1989.

A sex tape of Anderson and Tommy Lee on their honeymoon was stolen from their home in 1995 and made a huge stir on the Internet. Anderson sued the video distribution company, Internet Entertainment Group. Ultimately, the Lees entered into a confidential settlement agreement with IEG. Thereafter, the company began making the tape available to subscribers to its web sites again, resulting in triple the normal traffic on the sites.

Another tape, which was made before the Tommy Lee tape, involving Anderson and musician Bret Michaels from Poison, was later announced, and an abridged version of less than 60 seconds appeared on the internet. Frames of the video first appeared in Penthouse magazine in March 1998. The tape was successfully blocked by Michaels, but a four-minute sex tape is still available on the Internet.

In addition to her fame from modelling and acting, Anderson has received a great deal of press attention for her well-publicized personal life. Her relationships have made headlines in gossip magazines for years. Anderson married Tommy Lee, drummer of Mötley Crüe, on 19 February 1995, after knowing him for 96 hours and the couple eventually had two sons, Brandon Thomas Lee and Dylan Jagger Lee, named for Anderson's great grandfather, Dale Jagger Grosco who fought in World War II. During this time, she was known professionally as Pamela Anderson Lee. Anderson filed for divorce from Lee twice and reconciled with him twice, before the couple finally divorced in 1998.

In March 2002, Anderson publicly stated that she had contracted Hepatitis C from Lee (supposedly from sharing tattoo needles), and began writing a regular column for Jane magazine. In October 2003, Anderson jokingly said on Howard Stern's radio show that she does not expect to live more than 10 or 15 years, but this was misconstrued and taken seriously by many websites and tabloids.

After the 1998 divorce, Anderson became engaged to the model Marcus Schenkenberg; they broke up in 2001. She then became engaged to the singer Kid Rock (Robert J. Ritchie); she broke up with him in 2003. On 18 July 2006, it was announced that she would marry Kid Rock on 29 July 2006, on a yacht near St Tropez, France. "Feels like I've been stuck in a time warp," said Anderson in her blog entry. "Not able to let go of MY family picture ... it's been sad and lonely and frustrating ... I've raised my kids alone in hope of a miracle. Well my miracle came and went. And came back and back because he knew that I'd wake up one day and realize that I was waiting for nothing." "I'm moving on," she declared. "I feel like I'm finally free ... I'm in love." There was extensive unconfirmed media speculation that the marriage was pregnancy-related, but the theory was based only on Anderson's representative's refusal to comment on the question.

On 10 November 2006, it was announced that Anderson had miscarried while in Vancouver shooting a new film, Blonde and Blonder. Seventeen days later, on 27 November 2006, Anderson filed for divorce in Los Angeles County Superior Court, citing irreconcilable differences. Some news reports have suggested that Kid Rock's outrage during a screening of Borat, in which Anderson plays a cameo role, led to the filing for divorce two weeks later.

In September 2007, Anderson told talk show host Ellen DeGeneres that she was engaged. On 29 September, Anderson and film producer Rick Salomon applied for a marriage license in Las Vegas. On 6 October 2007, Anderson married Salomon in a small wedding ceremony at The Mirage, between her two nightly appearances at the Planet Hollywood Resort and Casino in Hans Klok's magic show. The couple separated on 13 December, and on 22 February 2008, Anderson requested through the courts that the marriage be annulled, citing fraud.

In February 2007, Anderson said that she still often had sex with Lee since their divorce. In mid-2008 Lee said that they were going to try again to make things work together.