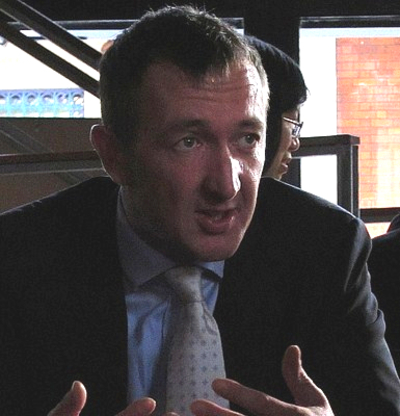 Ralph Michael Ineson (born 15 December 1969) is an English actor, best known as Dagmer Cleftjaw in Game of Thrones, Amycus Carrow in the last three Harry Potter films, William in The Witch, Donald Bamford in the BBC series Goodnight Sweetheart, and Chris Finch in the BBC series The Office.

Ineson was born in Leeds, West Riding of Yorkshire and educated at Woodleigh School, North Yorkshire and Pocklington School. In the early 1990s, after studying Theatre Studies at Furness College, Lancaster University, he was a teacher at York Sixth Form College, where he was also a cricket coach.

He played the recurring character Chris Finch in the BBC comedy The Office. He starred as Donald Bamford in the sitcom Goodnight Sweetheart, as Zack in the soap opera Coronation Street, and played ex-soldier "Sam Walker" in the first series of Spooks. He played Luke Mullen in the BBC drama Playing the Field. He had a minor part in episode four of the first series of BBC drama This Life. He starred in Suburban Shootout, which aired on Paramount Comedy and Five. He played Frank Monk in series 7 of Waking The Dead in the episode, "Wounds". He played Dagmer Cleftjaw in the second season of HBO's Game of Thrones. He also appeared in an Imperial Leather advert as a fireman.

Ineson had a minor role in the fifth and sixth series of BBC drama Waterloo Road in 2009 playing the role of Jon Fry. He had a small role in an episode of Channel 4 comedy The IT Crowd, as Paul, a buttock-kissing masseur, in the series 4 episode "Something Happened". In the 2012 ITV Titanic mini-series he played Steward Hart. In 2016, he appeared in the third season of the BBC Two series Peaky Blinders, playing the part of Connor Nutley.

Ineson's Hollywood film credits include First Knight, From Hell, Sex & Drugs & Rock & Roll and a brief role in The Damned United. He played Amycus Carrow, a Death Eater, in Harry Potter and the Half-Blood Prince, Harry Potter and the Deathly Hallows – Part 1 and Part 2. He also appeared in the 2008 film Cass, as Sergeant Mullins.

In 2014, he appeared in the Marvel Studios film Guardians of the Galaxy. Also in 2014, he had a small role in the spy film Kingsman: The Secret Service, playing a policeman that interviews Eggsy.

Ineson appeared in a minor role as a First Order officer in the 2017 film Star Wars: The Last Jedi. His role was originally bigger, but most of his performance ended up on the cutting room floor. The cut material is available in a deleted scene on the 2018 Blu-ray release of the film.

Ineson has used his distinctive Yorkshire accent in a variety of voice over work. He has narrated TV programmes Licence to Drill, Salvage Hunters on the Discovery Channel, the 2010 Sky TV series Inside Gatwick, the BBC1 series Claimed and Shamed.

In the 2012–13 BBC Radio 4 dramatisations of the ten Martin Beck police novels by Maj Sjöwall and Per Wahlöö, Ineson played policeman Gunvald Larsson.

In 2013, he voiced the Channel 4 series Skint which followed the lives of British families from underprivileged backgrounds. In 2015, he narrated Countryside 999 on BBC One. In 2009 he narrated the BBC One documentary Series Gears and Tears which follows the characters of British BriSCA Formula 1 Stock Cars.

TV adverts that have used his voice include: lastminute.com, Dacia cars, Gaviscon and Wickes. He also did the Sky Bet adverts during Sky Sports football coverage.

In video games, Ineson returned to voice Amycus Carrow in the video game adaptation of Harry Potter and the Deathly Hallows – Part 2, and gave his voice and likeness for the infamous pirate Charles Vane in Assassin's Creed IV: Black Flag.

He has been married to Ali Ineson, editor of make-up artist magazine Warpaint, since December 2003; they have two children, Luc born 1999 and Rebecca born 2003.