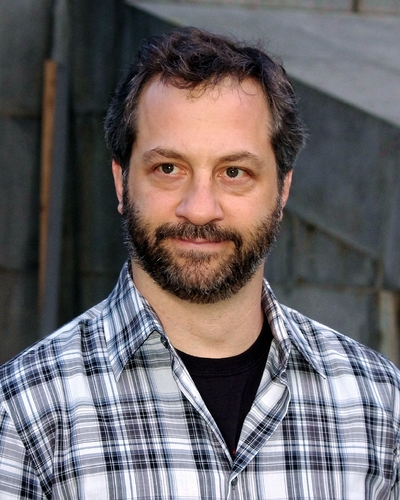 Judd Apatow (born December 6, 1967) is an American film producer, director, and screenwriter. Best known for his work in comedy films, he is the founder of Apatow Productions and also developed the cult television series Freaks and Geeks, Undeclared and Girls. Apatow's work has won numerous awards including a Primetime Emmy Award (for The Ben Stiller Show) a Hollywood Comedy Award, and an AFI Award for his movie Bridesmaids. His work has also been nominated for Grammy Awards, PGA Awards, Golden Globe Awards and Academy Awards (for Bridesmaids). In October 2012, Vanity Fair announced that Apatow would be guest-editing their comedy Issue, the first person to ever do so. It has also been reported that Apatow will guest-write on an episode of The Simpsons that is due sometime in 2013-2014. In 2007, he was ranked #1 on Entertainment Weekly's The 50 Smartest People in Hollywood.

Judd Apatow was born in Flushing, New York, and raised in Syosset, New York. His father, Maury Apatow, was a real estate developer, and his mother, Tami (Shad), worked primarily managing record labels founded by her father, music producer Bob Shad. His family was Jewish, "but nonreligious". Apatow has an older brother, Robert, and a younger sister, Mia. When Apatow was twelve years old, his parents divorced. Robert went to live with his maternal grandparents, and Mia went to live with her mother. As a child, Apatow lived mainly with his father, and visited his mother on weekends.

Apatow’s mother spent a summer working at a comedy club, which is where Judd was first exposed to live standup comedy.

Apatow was obsessed with comedy as a child; his childhood heroes were Steve Martin, Bill Cosby and the Marx Brothers. Apatow got his comic start washing dishes at the Long Island East Side Comedy Club, and while attending Syosset High School, he hosted a program called COMEDY CLUB on the school's 10-watt radio station WKWZ which he created as a way to meet and learn from the comedians he looked up to. He cold-called comedians he admired during this time, managing to interview Steve Allen, Howard Stern, Harold Ramis and John Candy, along with emerging comedians such as Jerry Seinfeld, Steven Wright and Garry Shandling.

Apatow began performing stand-up comedy at age seventeen, during his senior year of high school. In the September 1985 issue of Laugh Factory Magazine, he is listed as an Associate Editor. After graduating from high school in 1985, he moved to Los Angeles and enrolled in the screenwriting program at University of Southern California. While at USC, he organized and hosted a number of on-campus "Comedy Night" events, featuring headliners such as Saturday Night Live performer Kevin Nealon. Apatow introduced the acts at these events with short standup routines of his own.

Apatow dropped out of college during his sophomore year and later moved into an apartment with comedian Adam Sandler, whom he met at the Improv. He competed in the Johnnie Walker Comedy Search in 1989.

Shortly thereafter, Apatow was introduced by manager Jimmy Miller to Garry Shandling which resulted in Apatow being hired as a writer for the Grammy Awards that year, which Shandling hosted.

Apatow went on to join HBO’s The Larry Sanders Show in 1993 as a writer and consulting producer, and he later served as a co-executive producer and director of an episode during the show’s final season in 1998. Apatow credits Shandling as his mentor for influencing him to write comedy that is more character-driven. During his work on the Larry Sanders Show, Apatow was nominated for multiple Emmys as well as a TV Critics award.

In the 2013 Critics Choice Award Nominations from the Broadcast Film Critics Association, Apatow's film This Is 40 was nominated for Best Comedy as were Leslie Mann and Paul Rudd for their performances in the film. On January 10, 2013, the Broadcast Film Critics Association awarded Apatow the “Critics' Choice Louis XIII Genius Award” named after a cognac.